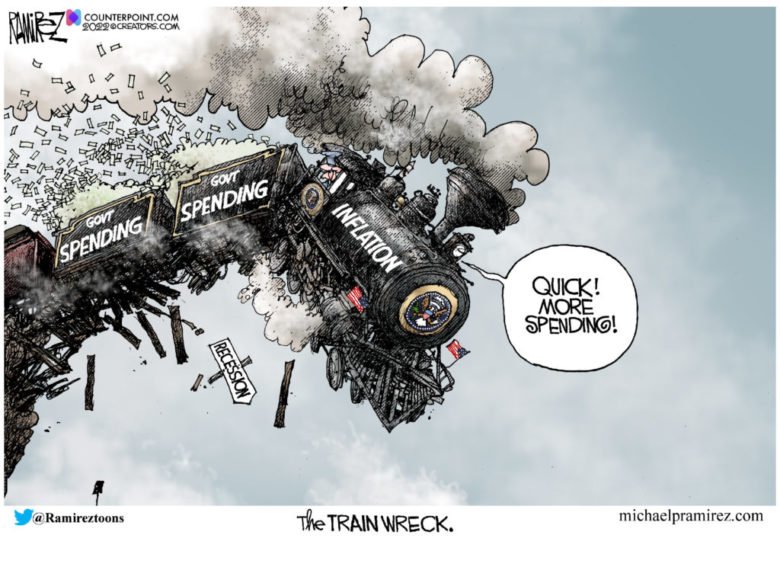 As we enter 2023, there are at least three major problems that economic policymakers will have to deal with. We have high inflation, a likely recession, and a very serious problem with the debt ceiling. Actions will be taken in the next month or so that will impact how severe these problems are.

Annual inflation peaked last June at 9.1%. It could have been much worse. The problem was caused by a number of factors, but excess demand was the primary cause. Much of the excess demand resulted from the federal government deficit spending more than $7 trillion dollars in 2020, 2021 and 2022.

In addition, excess demand worsened because of the shockingly irresponsible monetary policy of the Federal Reserve. All through 2021, despite inflationary pressures building, the Fed kept interest rates near zero and rapidly expanded the money supply through its $240 billion monthly bond purchasing program.

Finally, in March 2022, the bond buying program ended and interest rates were increased. In June the Fed increased interest rates by 75 basis points and did that again three more times. In December the increase was only 50 basis points. It looks like the policy is reducing inflation, as the December annual inflation rate fell to 6.5%.

The Fed is likely to raise interest rates two or three more times in 2023. That should reduce inflation further, but it could contribute to a recession.

Most economists are forecasting a recession sometime in 2023. Although the first half of 2022 saw negative growth in Gross Domestic Product (GDP), the second half saw strong positive growth. In the third quarter, GDP grew by 3%, and the fourth quarter looks to have grown at about the same rate.

The most critical problem is the debt ceiling. Since the federal government has deficit spent in 65 of the last 69 years and since there is no program in place to ever repay the bonds sold to finance the annual deficits, the public debt has reached $31.4 trillion. That’s the limit that Congress has set.

For the government to continue to spend money that it doesn’t have, Congress must authorize an increase in the debt ceiling. With a President who wants to further increase spending, mostly for social programs and to prevent climate change, and a Senate willing to go along, it is now up to the House of Representatives.

Since the GOP now has a majority in the House, there will be some problems reaching a consensus. The GOP has vowed to increase the debt ceiling only if spending will be reduced.

According to Treasury Secretary Janet Yellen, the country will reach the debt limit later this week. She can move some money around for a few months, but eventually, the debt ceiling will have to increase. Incidentally, Yellen believes the country should eliminate the debt ceiling so that the federal government can spend as much as they desire.

This will lead to a nasty fight in Congress. The Dems will say that the GOP is trying to take away benefits from the most needy. Since both Social Security and Medicare are on the road to insolvency within the next decade, the GOP will want to take action to hold the line on spending for those entitlement programs.

The least harmful solution to that would be to raise the retirement age significantly. If the GOP suggests that, the Dems will cry foul.

Biden and the Democratic Congress passed massive increases in social program spending in Biden’s first two years in office. Now with GOP control of the House, that won’t happen. But can spending actually be reduced? If not, can the increased scheduled spending be reduced?

The next month or so should be very interesting. Energy prices have fallen substantially in the last six months due to a mild winter and the recession in China. But if energy prices rise again, which is very likely, inflation will worsen. If the Fed reacts by over-tightening the money supply, a more severe recession will follow. And there will be a nasty fight over the debt ceiling.

Hold on. We are in for a wild ride.

ABC Panelist Equates CRT Bans with Police Brutality Against Black People
Bodycam footage shows Tyre Nichols calling for his mother as he is beaten by officers before his death
California’s Radical Effort to Transform America’s Auto Industry: Not Your Forefathers’ Idea of Federalism
RATINGS KING: Greg Gutfeld Of FOX News Tops Every Show On CNN And MSNBC
Border Crisis: Officers Seize $4 Million in Narcotics in One Day