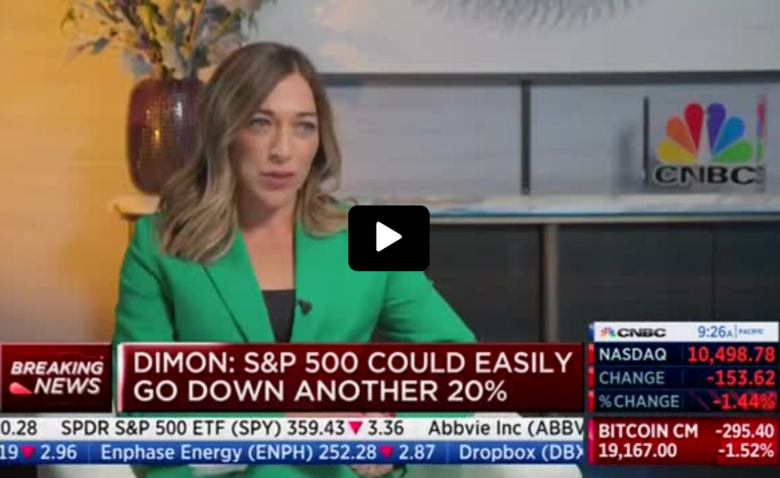 JPMorgan Chase CEO Jamie Dimon warned Monday that a major stock market could face big losses and that the economy could be headed for a recession.

“Look, it — it may have ways to go. I mean, it really depends of that soft landing, hard landing thing, and since I don’t know the answer to that, it’s hard for me to answer that. But it could be — it could be another easy 20%.” Dimon said during a Monday interview with CNBC reporter Julianna Tatelbaum in London. “And — you know, I think like the next 20% are going to be much more painful than the first. Rates going up. Another 100 basis points are a lot more painful than the first 100, because people aren’t used to it.”

The Federal Reserve increased interest rates by 75 basis points Sept. 21, following two other rate hikes in the previous months in an effort to fight inflation. The Consumer Price Index rose by 8.3% year-over-year in August following year-over-year increases of 8.5% in July, 9.1% in June, and 8.6% in May.

“These are very, very serious things which I think are likely to push the U.S. and the world — I mean, Europe is already in recession — and they’re likely to put the U.S. in some kind of recession six to nine months from now,” Dimon told Tatelbaum.

The economy shrank by 0.6% in the second quarter of 2022, according to revised estimates released in August following a 1.4% decline in gross domestic product (GDP) in the first quarter. Two consecutive quarters of contraction as measured by GDP is colloquially considered a recession, according to Investopedia.