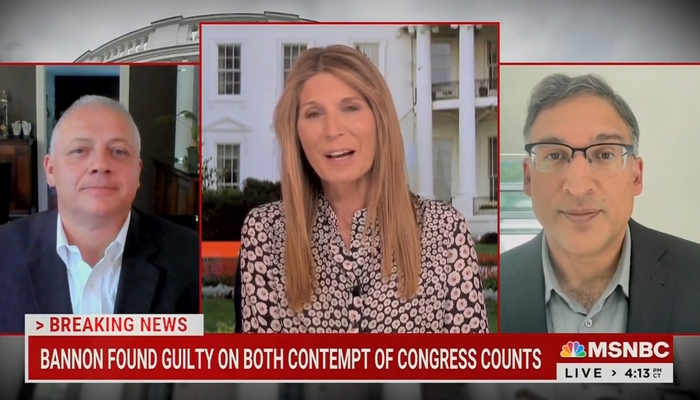 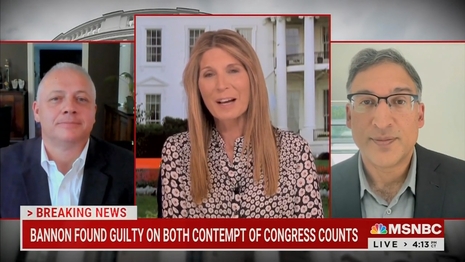 This isn’t a normal occurrence. As the Washington Post reported, Bannon would be “the first person sent to jail for contempt of Congress since the ‘Hollywood Ten in 1948.”

“So he’s looking at, possibly, as much as 24 months. He’ll finally get the one thing Steve Bannon has always wanted: a captive audience. It just happens to be in jail.”

For ignoring a subpoena to testify before Congress, Bannon was convicted of misdemeanors. Was Katyal ever that gleeful over the conviction of terrorists or other heinous, violent, criminals?

Katyal scowled at The New York Times calling this a “low-level process crime,” but his pal Eric Holder, his boss in the Obama administration, was voted in contempt of Congress in 2012, and didn’t go to prison. Those two are still buddies: Holder recently defended Katyal for his work defending two companies in child-slavery allegations.

After the joke about “captive audiences” in jail, Wallace chipped in with this sneering yet ambiguous shot:

“I’m not even sure they’ll be captive. I’ve seen some of those press conferences.”

Whatever, Nicolle. But full points for piling on.

NICOLLE WALLACE: Neal, I want to get both of you on the record on, on Steve Bannon’s unsurprising but still, in the state of the story of the Trump presidency, guilty conviction for defying his congressional subpoena.

He’s someone who New York Times Reporter Jeremy Peters has reported, doesn’t even believe in the lies of election fraud. But he’s heading to jail to defy a subpoena. Why?

NEAL KATYAL: Well, you know, this was a, I know the New York Times described it as a low-level process crime. I don’t think that’s right at all. I think, Nicolle, this is really serious.

Congress made solemn requests to Bannon. They said, look, we know that you have relevant information to the January 6th committee. They isolated, for example, the meeting at the Willard Hotel on January 5th. They isolated, I think 17 different sets of documents that Steve Bannon had. He turned none of that over.

And you know, in our democracy, when Congress asks for something, you’ve got to have a really good reason to not turn it over, and the good reason can’t be, I’m afraid to tell the truth, or Donald Trump will get mad at me, or things like that. Those don’t work Those were Bannon’s excuses. He tried that at trial, it went nowhere.

This trial lasted just about as long as Steve Bannon’s entire career in the White House—like a couple of minutes, basically. [Nicolle Wallace heard laughing offscreen.]

And he’s found guilty. And each count of contempt, and there are two different ones, and he was convicted on both, carries a 12-month jail time.

So he’s looking at, possibly, as much as 24 months. Which means he’ll finally get the one that Steve Bannon has always wanted: a captive audience—that just happens to be in jail.

WALLACE: And we’re not even sure they’ll be captive. I’ve seen some of those press conferences.