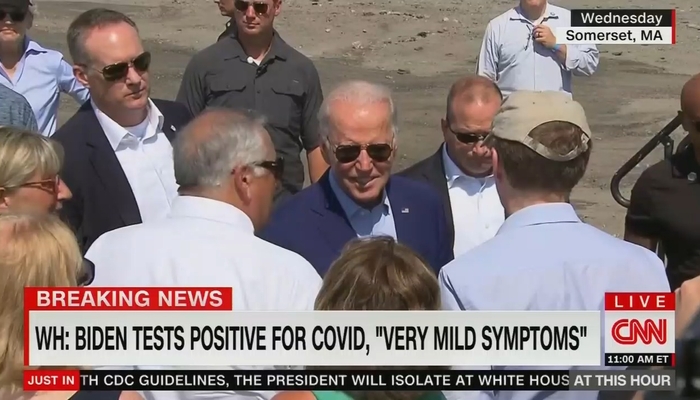 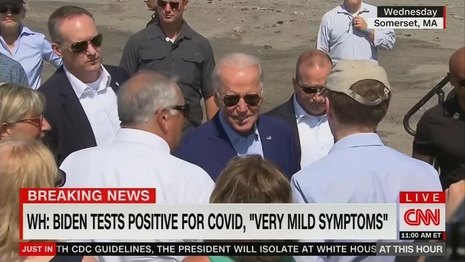 President Biden has tested positive for COVID. We should all hope the president has an easy time. We should not ask for media nastiness and/or glee.

But this presents an obvious occasion to remember just how the “objective” press made a frenetic, mean-spirited and hyperbolic mess out of Trump’s bout with the virus, which was announced on October 2, 2020. In their ardor to get Trump removed from office, they couldn’t imagine acting with decency or restraint.

First and foremost, cable-news channels couldn’t pause for a day or two from their routine smear that Trump was responsible for the deaths of hundreds of thousands. Take ex-GOP strategist Rick Tyler on Al Sharpton’s show on MSNBC: “I look at this as a drunk driver who injured himself in a wreck, and killed the oncoming sober driver. Donald Trump has injured himself…and 200,000 people, other drivers, have died due to the coronavirus.”

After Trump was infected, CNN analyst Carl Bernstein just doubled down that “His response has been homicidal negligence.” CNN brought on then-Washington Post opinion editor David Swerdlick, who couldn’t get rid of Trump fast enough: “President Trump is the President until at least January 20th at noon and every day, people’s lives are in the balance.”

So let’s just lay out the numbers again. When President Trump left office, we had lost about 400,000 Americans to COVID. Since then, under Biden, the death toll is now 1.02  million. But the media blamed Trump for every single death on his watch…and Biden was assigned zero blame for anyone’s demise.

You can loathe Trump’s remarks early in the pandemic trying to downplay the threat, but to accuse him of mass murder – which was routine in 2020 – was apparently what the liberals call “reality-based journalism.” No “independent fact checkers” objected. 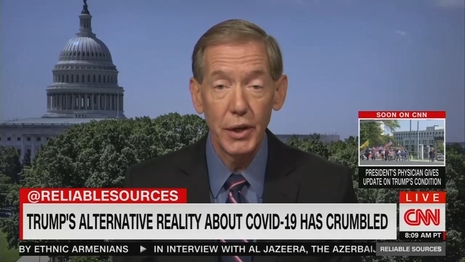 On the reliably liberal program Reliable Sources, former Fox News reporter Carl Cameron lost all sense of reality after Trump was infected, proclaiming “This is the collapse of a democratic republic because of its leadership and its honesty.” Democracy was always dying.

But that’s not as bad as Masha Gessen, a Russian-American writer for The New Yorker. She told Brian Stelter it could be compared to the Stalin death watch. “There have been a lot of comparisons to the Soviet Union in the last couple of days. I think they are not unwarranted. The particular period I am thinking about is something I have written about a lot, which were the days of Stalin’s death watch, right? When the foreign correspondents and the domestic correspondents, such as they were, all knew what was going on. Nobody was giving them any information. Everybody was expecting the final call, right?”

Trump didn’t die, but CNN wanted to speculate about it. For years, CNN loved comparing Trump to Stalin, Hitler, and Mao Zedong. Stelter even put on his show a kook who proclaimed Trump would kill more people than all of those mass murderers… combined.

The real irony of all this was CNN host Don Lemon then offering a glowing tribute to Joe Biden for refusing to politicize Trump’s infection. He proclaimed “here you see Joe Biden showing you what a real man does — what a real human being does.” It’s not at all what they did at CNN!

Biden didn’t have to exploit Trump’s illness. He had an entire media-Democrat complex to do it for him. Remember this: Democrats will always find it easier to appear above the nasty fray when they have media hacks like CNN to do all their dirty work for them.

Scientists Join Lawsuit Against Biden Admin
Mark Levin On FBI Trump Raid: ‘Worst Attack On This Republic In Modern History’ (VIDEO)
Liberal PBS Pundit Compares His Hero Liz Cheney to… Obi-Wan Kenobi
Apple Might Have To Delay Its New iPhone Thanks To Chinese Crackdown
Western Propaganda Continues to promote the Meme that Russia Is Toast