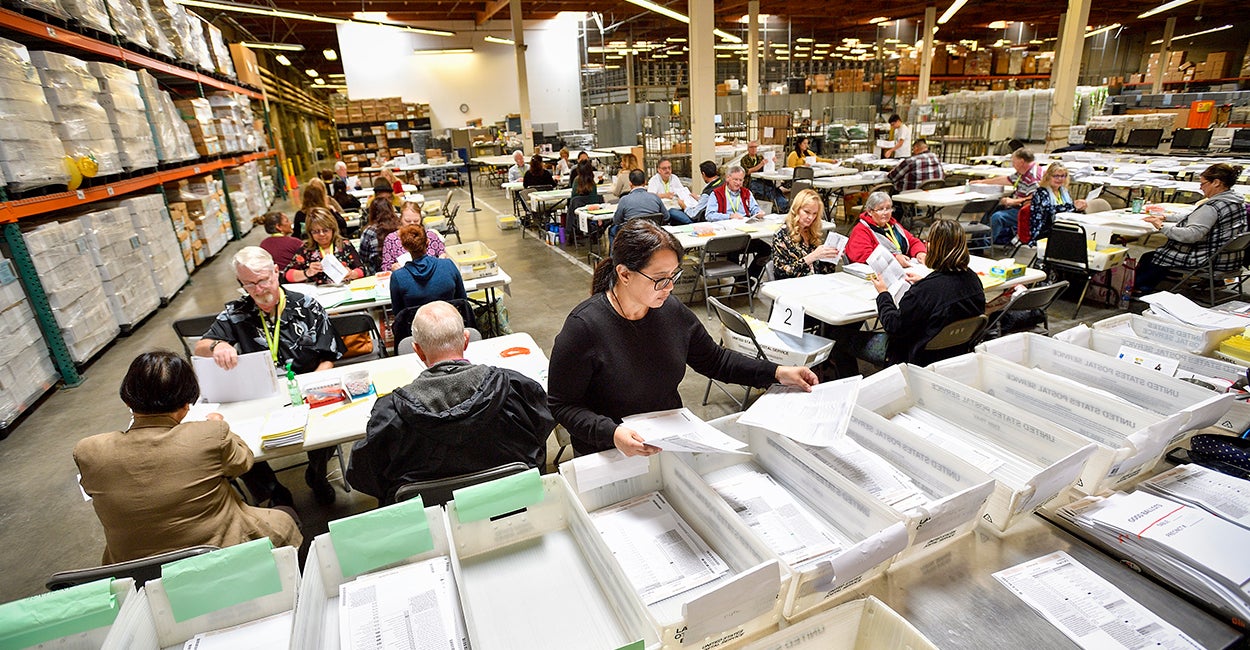 “One of the reasons I believe in the resurrection,” Mike Huckabee once joked, “is because we’d see dead people vote every year!”

Well, he’s about to make a lot of converts in California, where liberal Gov. Gavin Newsom just ordered a vote-by-mail system through November—a decision that’s scaring the daylights out of anyone who cares about ballot integrity.

For all the talk of other countries meddling in our elections, they know as well as we do—the biggest threats are right here at home.

“I signed an executive order,” Newsom said, “that will allow every registered voter in California to receive a mail-in ballot.” Even, it turns out, if that voter isn’t alive to cast it.

Shortly after the governor announced his decision, the California Globe pointed out that 458,000 residents who died or moved are still on the “active” rolls—meaning that a half-million ballots will be floating out there for the taking. Another 24,000 people, Election Integrity Project California warns, will get two or more.

“We simply cannot go all vote-by-mail in November unless and until California’s voter lists are finally cleared of duplicated, deceased, relocated, and other ineligible registrants,” Ellen Swensen of Election Integrity Project California argues. She’s right.

Here’s the problem with this whole mail-in idea, MIT’s Election Lab explains. “First, the ballot is cast outside the public eye, and thus the opportunities for coercion and voter impersonation are greater. Second, the transmission path for vote-by-mail ballots is not as secure as traditional in-person ballots. These concerns relate both to ballots being intercepted and ballots being requested without the voter’s permission.”

Put simply: There’s no oversight. There’s no way to guarantee that a ballot even gets to its destination—let alone counted once it’s there. “Once that ballot is out of the hands of the elector,” one official shook his head, “we have no idea what happens to it. The possibilities are numerous and scary.”

Combine that with the fact that California hasn’t cleaned up its voting records in 20 years, and the opportunities for cheating are everywhere.

Los Angeles County alone, John Fund explains, has a voter registration rate of 112% of its adult citizen population. One of the few legitimate voters in that county, a Democrat, told the Los Angeles Daily News that the amount of pressure one door-to-door canvasser put on him “sent chills down [his] spine.”

Imagine the level of harassment and intimidation that will take place when everyone’s voting from home. If activists will come to a Democrat’s house and scare him, no one is safe.

A change of this magnitude shouldn’t come by governor fiat either. This is a massive overhaul of the democratic process that Newsom is changing with a wave of his pen.

Not to mention, there’s no guarantee that state officials have enough time to implement a ballot-by-mail system by November—or test it to work out the kinks.

As MIT’s Charles Stewart points out, the only thing worse than a universal mail-in system is one that leaders fast-track. “Hastily implemented changes to voting rules and laws can end up causing all types of problems that you didn’t anticipate.”

Democrats know that mail-in ballots are a “recipe for confusion, coercion, and fraud,” Fund says. That’s why they want them sent to every voter. But this isn’t just about 2020. It’s about 2022, 2024, and every election that comes after.

Democrats, Republicans, independents—we all have a stake in making the democratic system an honest one.

Originally published in Tony Perkins’ Washington Update, which is written with the aid of Family Research Council senior writers.

The Debt Ceiling Debate, Explained
Alliance of Big Tech, Dark Money Groups Partners With Counties in State That Bans ‘Zuckerbucks’ for Elections
‘If you need to arrest me, I understand’: US Marine allegedly flew from Louisiana to Florida to have sex with 14-year-old girl he met online
The Sad State of MSNBC’s Recycled, Tired Vax Propaganda Targeting Men
Woman allegedly met 87-year-old Holocaust survivor on dating site, conned him out of millions that she blew on luxury items