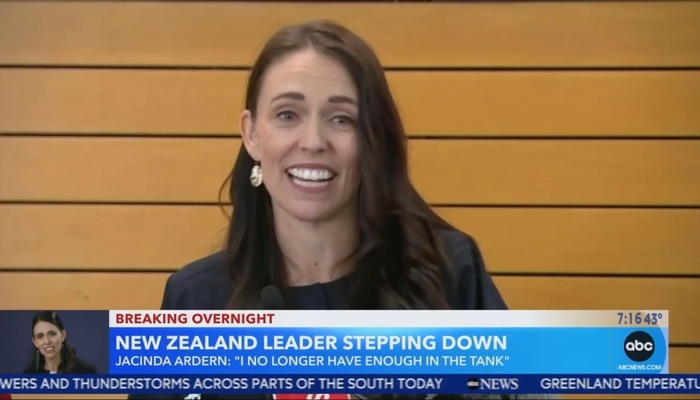 WELLINGTON, New Zealand – Like Halley’s Comet that only comes around every 75 years, the resignation of a top politician from office is a rare occurrence.

Prime Minister Jacinda Ardern has quit and not for the usual reasons of scandal or the all-purpose excuse “to spend more time with my family.” In a burst of honesty worthy of emulation by other leaders, Ardern has resigned because she says she has “nothing left in the tank.”

She made her announcement at a news conference that shocked her Labour Party and everyone else. Ardern, who led the country through the pandemic and a massacre at a mosque in Christchurch in 2019, is only 42 and in what most would consider the prime of her political life. She had recently denied press reports she would quit.

One factor that may have contributed to her resignation takes some of the bloom off the rose of her seeming transparency. She insisted her decision to step down had nothing to do with polls that show her party behind the rival National Party ahead of the upcoming October election. She claimed she could win re-election if she ran.

The Labour Party has held power since 2017, but last year lost its consistent lead in the polls. The opposition National Party began to surge last October.

At a news conference during which she fought back tears, Ardern said: “I am leaving because with such a privileged job comes a big responsibility. The responsibility to know when you are the right person to lead – and also when you’re not.”

Wouldn’t that be an excellent standard for American politicians, many of whom stay far beyond their “sell-by” dates?

She also said she wanted to marry her boyfriend/fiancé with whom she has a child.

Ardern, who was considered by many to be a role model for women and young people, was elected five years ago and at 37 became New Zealand’s youngest ever prime minister. Before that, at 28, she was the youngest sitting Member of Parliament in 2008. During her press conference, she admitted: “I didn’t expect to be prime minister.”

Ardern was the subject of heavy criticism for imposing some of the strongest Covid-19 restrictions in the world, including lockdowns in which New Zealanders couldn’t even buy carryout food. She also closed the country’s border for more than two years. It made Michigan Democratic Governor Gretchen Whitmer’s Covid-19 arbitrary policy banning the sale of seeds and some gardening supplies, while allowing the sale of other things, look sane by comparison.

New Zealand politics can be confusing and contradictory as in the U.S. In 1984, the Labour government came to power with a promise to make the country nuclear-free. This attitude was typical among many on the left who believed showing the Soviet Union we “meant them no harm,” as the saying went, would create a different kind of deterrent. Ronald Reagan’s “peace through strength” approach proved decisive.

For many, politics is either an aphrodisiac, or a drug. Both are addictive and difficult to break free from. Assuming her resignation explanation is true, Jacinda Ardern has managed to achieve that goal. More power to her.