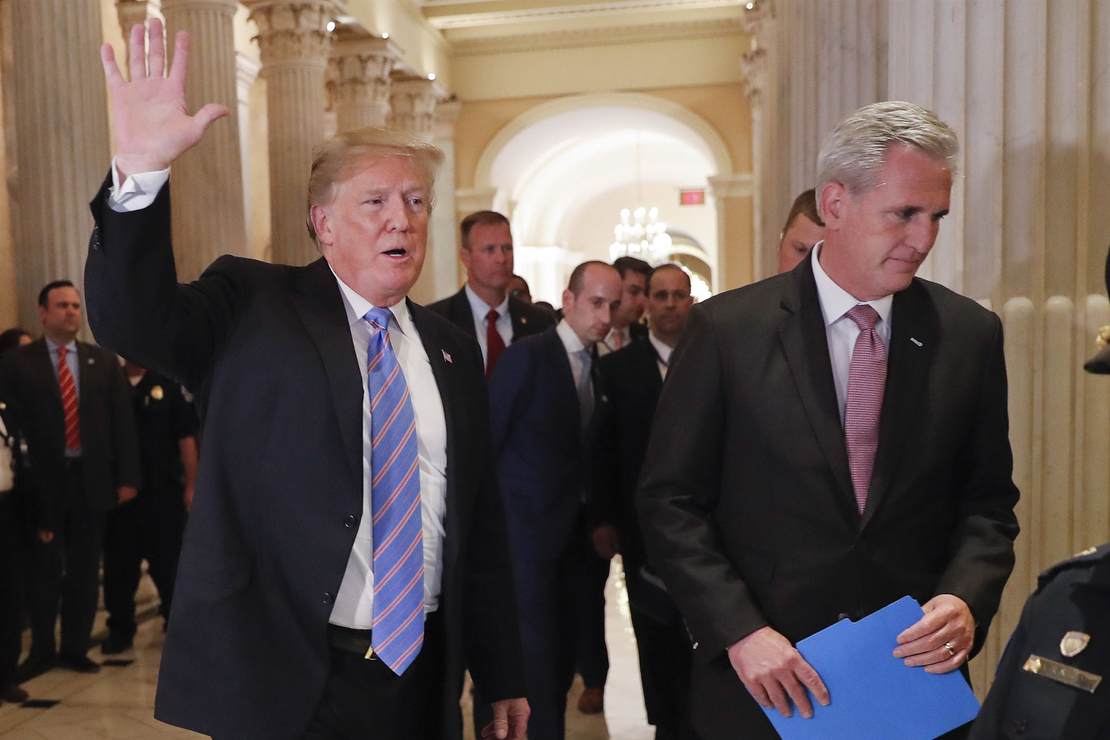 After a rather undignified day of chaos involving three rounds of voting that failed to elect a new Speaker of the House, Donald Trump weighed in on Wednesday morning and called on Republicans to unite behind Kevin McCarthy.

“Some really good conversations took place last night,” Trump said in a post on Truth Social. “And it’s now time for all of our GREAT Republican House Members to VOTE FOR KEVIN, CLOSE THE DEAL, TAKE THE VICTORY, & WATCH CRAZY NANCY PELOSI FLY BACK HOME TO A VERY BROKEN CALIFORNIA.”

“Kevin McCarthy will do a good job, and maybe even a GREAT JOB – JUST WATCH!” Trump insisted.

Republicans have a 222-seat majority in the House, but McCarthy has failed to reach the necessary 218 votes to be officially elected Speaker of the House.

Five conservatives, led by Rep. Matt Gaetz (R-Fla.) and Rep. Andy Biggs (R-Ariz.), have publicly declared that they will not support McCarthy under any circumstances and have called on him to step aside to make place for a more viable candidate.

“If you want to drain the swamp, you cannot put the biggest alligator in charge of the exercise,” Gaetz said Tuesday. “I’m a Florida man and I know of what I speak.”

McCarthy, however, promised not to back down. “I’m not going anywhere,” he said, insisting that he will “always fight to put the American people first, not a few individuals that want something for themselves.”

“So we may have a battle on the floor,” he added, “but the battle is for the conference and the country, and that’s fine with me.”

Counterpoint:  As McCarthy Goes Down, Is a Fight for the Speaker’s Chair Really Such a Bad Thing?

At the time of this writing, McCarthy once again failed to get 218 votes. In fact, he got less votes in the latest round (201) than he did in the first round (203), which means that Trump’s call for Republicans to rally behind McCarthy went unheeded.

Say what you want about McCarthy, but perhaps Trump is right. Does the Republican Party need this embarrassment right now? Will McCarthy do a “great job,” as Trump said? Honestly, I have my doubts. But, that’s not even the point anymore. Democrats are laughing at the GOP as we speak because they know that there is no way for House Republicans to emerge from this battle united, and the longer it drags on, the worse it will get.

Democrats, on the other hand, have been firmly united behind Rep. Hakeem Jeffries (D-N.Y.) to be the next speaker, and thanks to Republican opposition, Jeffries has received more votes in each round than McCarthy has. Because of the GOP’s lack of unity, Democrats are mocking Republicans on social media and laughing at them in the media.

“If you’ve run out of Netflix shows, there’s a new one out at 12pm-starring House Republicans. Instead of fighting inflation, they’re fighting each other,” Rep. Grace Meng (D-N.Y.), tweeted.

Sure, it’s a dumb joke, but if the shoe fits.

Does he not have a point? He certainly does. The failure of the Republican caucus to work this out behind closed doors is a terrible sign of the slim GOP majority’s ability to govern. With everything the Republican Party needs to do to hold the Biden administration accountable for its incompetence and corruption, the GOP needs to get its act together and put this impasse behind them. The entire country is watching.

PBS NewsHour Special Pushes Liberal Line on Guns and American Racism
Dem Senator Defends Biden Judicial Nominee Who Couldn’t Answer Basic Questions About The US Constitution
Column: This Just In, Journalistic Objectivity Is Obliterated
CCP Media in Español? Telemundo, Univision Say China Spy Balloon “Not a Threat”
The Fringe with Megan Fox, Episode 118: Tech Neck. We All Have It. Now What?