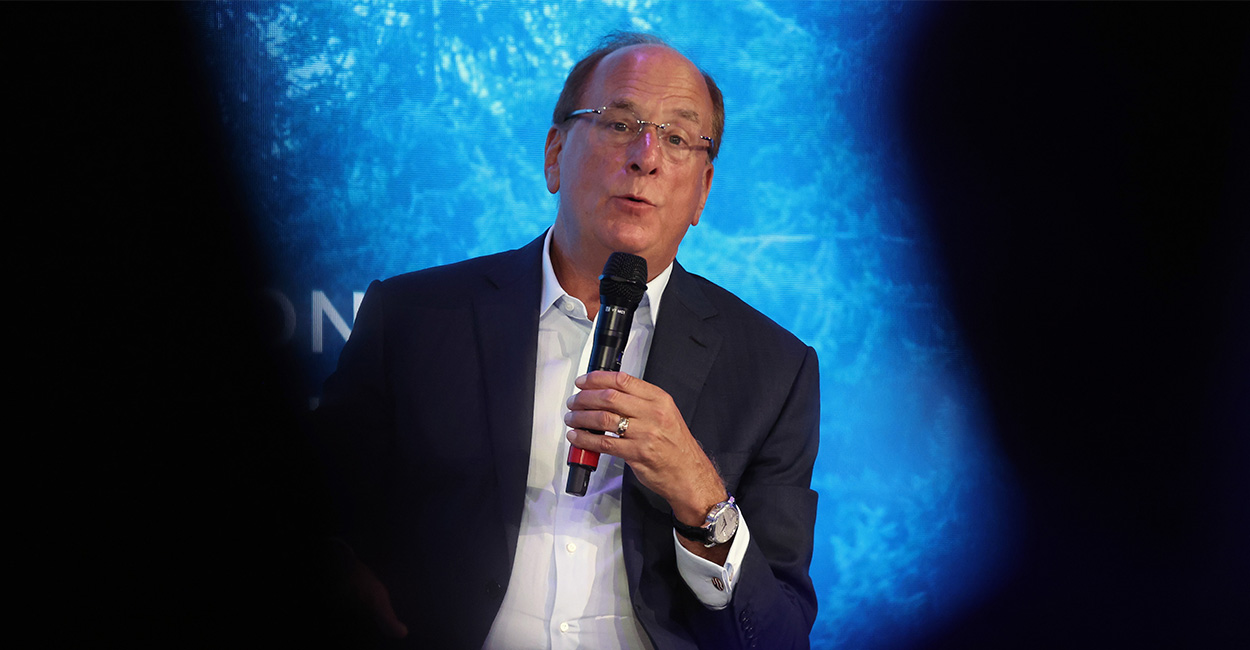 “Unfortunately, Larry Fink is not the only problem. It’s a cultural problem at BlackRock, misusing their fiduciary responsibilities to push a political agenda,” Arizona State Treasurer Kimberly Yee told The Daily Signal in a phone interview when asked if she thinks Fink should resign.

“The board of directors of BlackRock have sided with Larry Fink’s message and his resignation alone will not change the culture of BlackRock,” said Yee, who was reelected to another term in November.

Yee’s comments follow recent calls from the North Carolina state treasurer that Fink “resign or be removed” immediately in a letter sent to the board of directors of BlackRock on Dec. 9, The Daily Signal previously reported.

“As keeper of the public purse, my duty is to manage our investments to ensure that the best interests of those that teach, protect and serve, as well as of our retirees, are always paramount,” North Carolina State Treasurer Dale Folwell said in the letter to BlackRock’s board.

“The North Carolina Retirement Systems (NCRS) have approximately $14 billion invested through BlackRock in various active and passive funds, in addition to around $55 million passively invested in BlackRock stocks or bonds,” wrote Folwell, a Republican who won reelection in 2020.

Folwell cited what he calls Fink’s “pursuit of a political agenda” and his “focus on ESG,” an acronym for so-called environmental, social, and governance policies:

Unfortunately, Larry Fink’s pursuit of a political agenda has gotten in the way of BlackRock’s same fiduciary duty. A focus on ESG is not a focus on returns and potentially could force us to violate our own fiduciary duty.

Ultimately, Fink’s continued ideological pressure could result in using ESG scores against states and local governments, lowering their credit ratings and thus driving up their cost of borrowing at taxpayers’ expense. This not only concerns me as the state treasurer but as chair of the North Carolina State Banking Commission and the Local Government Commission.

West Virginia State Treasurer Riley Moore similarly backed the idea last week for Fink to resign in an exclusive interview with The Federalist.

“Yes, I think Larry Fink should resign,” Moore said. “I don’t think he’s obviously somebody who’s too concerned about what policymakers in the United States think.”

Yee also discussed the timeline of Arizona’s efforts to divest over $500 million from BlackRock since February.

“It was in February of 2022 that we started divesting from the portfolios. Just so you know, we do not use BlackRock for their investment services because we have an internal investment team in our office,” Yee said. “So, we have never had a contract with them as some of these other financial institutions do who are in the public sector. So, I would like to make that clear.”

“We used [BlackRock] for money market funds, for daily liquidity needs, and when we started looking at BlackRock CEO Larry Fink’s annual letters, they did play a role in our decision to divest from BlackRock because it had become clear that he was using his position politically to push his own political beliefs,” said Yee.

It was well into 2021 that we actually started looking at the issue and then we did some research internally and began the divestment in our office in February of 2022.

We divested more than $543 million from BlackRock money market funds. We reduced our direct exposure to BlackRock by 97% this year.

Yee, along with eight state financial officers since the start of 2022, announced “the divestment or planned divestment of state funds from BlackRock and other financial institutions related to [environmental, social, and governance] investing strategies,” Ballotpedia reported.

Yee anticipates that other states will take similar steps in the future.

“As many of these public fiduciary organizations that would be similar to state treasuries or public pension funds, they may also have these internal reviews happening as we speak,” Yee said. “In my office, we have a weekly investment risk management committee that reviews our investments, and part of that review really saw the annual letters by CEO Larry Fink.”

“These types of letters began dictating to businesses in the United States to follow his political beliefs, his personal political beliefs, and it really was moving BlackRock from a traditional asset manager to a political action committee,” Yee said. “That really is moving in a dangerous path from my point of view.”

BlackRock directed The Daily Signal to a Dec. 15 testimony from Dalia Blass, senior managing director, a member of BlackRock’s Global Executive Committee, and the head of the BlackRock’s External Affairs Group, before the Texas Senate.

BlackRock’s “unwavering focus on clients has led to more and more people entrusting us with their money,” Blass said. “We are proud to be helping more than 35 million Americans, including nearly 3.5 million Texans, invest to save for retirement. In fact, our relationships with Texas clients are some of the oldest at the firm, with some going back 30 years.”

We understand how important the money we manage is to our clients; most of the assets we manage are for someone’s retirement. And we are delivering investment performance for our clients both inside and outside of Texas. For example, for 5 years running, we have delivered returns above benchmarks for our Texas active pension plan client mandates.

BlackRock has performed better than its competitors in terms of money from U.S. retail investors this year, the Financial Times reported on Dec. 18.

“BlackRock’s story is one of American success and innovation. Our CEO, Larry Fink, and seven other founders started the firm 34 years ago working out of a single room. Our growth has been built on putting clients first, offering world-class investment choice that meets unique needs, and providing unparalleled risk management,” BlackRock told The Daily Signal in an emailed statement. “From day one, our only agenda has been delivering the best long-term results for our clients, not politics.”

“Under Mr. Fink’s leadership, BlackRock has delivered a cumulative total return to shareholders of 7,700% since our public listing in 1999—the best performing financial firm in the S&P 500 over that time. In light of this, Mr. Fink has also received historically strong support from shareholders, with over 95% support at the last three shareholder meetings,” BlackRock added.

Over the past year, BlackRock has been subject to campaigns suggesting we are either ‘too progressive’ or ‘too conservative’ in how we manage our clients’ money. We are neither. We are a fiduciary. And clients continue to turn to BlackRock. This year, in the U.S. alone, clients have awarded BlackRock $84 billion of long-term net inflows in the third quarter and $275 billion over the last twelve months.

As we have consistently done over the last several decades, we will continue delivering for all our clients in Arizona, West Virginia, and across the country.

Jessica Anderson, executive director of Heritage Action for America, the grassroots arm of The Heritage Foundation, weighed in on Yee’s decision to divest, saying that it “sends a clear message.” (The Daily Signal is Heritage’s news outlet.)

“Arizona divesting from BlackRock sends a clear message that financial institutions prioritizing personal politics over their fiduciary responsibility are unacceptable to the American people,” Anderson told The Daily Signal in an emailed statement. “Rather than pushing the Left’s social and environmental agenda, asset managers should be focusing on strategies to maximize financial returns, especially for those serving their state’s communities as teachers, first responders, or other state workers.”

“Treasurer Yee’s actions are only part of a broader plan to ensure that Arizonans are not subsidizing the political agenda of the Left,” Anderson said. “Heritage Action looks forward to working to advance this goal, both in Arizona and other states across the country.”

How and Why the Left Is Making the Memphis Cops Into “Racists”
General Motors doesn’t expect significant U.S. production of EVs until second half of year
Beauty company claims dictionary examples of the word ‘beauty’ are ‘limiting and exclusive,’ calls for change
Bill Gates tells Elon Musk that he should forget about space travel and focus on vaccines
Travel companies are ‘greenwashing’ — here are 3 ways to find ones that aren’t