The FBI finally issued an official statement on revelations of its work with Big Tech to censor Americans in the Twitter Files. The explanation? The people reporting on the files are“conspiracy theorists.” 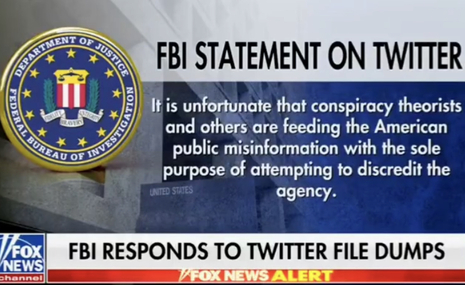 Recent installments of the Twitter Files revealed that the Federal Bureau of Investigation (FBI) directly flagged content and accounts for Twitter to censor. But if you have a problem with documents exposing the federal government colluding with Big Tech to restrict free speech, then you are the problem, according to the FBI’s statement shared with Fox News. “It is unfortunate that conspiracy theorists and others are feeding the American public misinformation with the sole purpose of attempting to discredit the agency,” the FBI’s gaslighting statement railed.

“The correspondence between the FBI and Twitter show nothing more than examples of our traditional, longstanding and ongoing federal government and private sector engagements, which involve numerous companies over multiple sectors and industries,” the FBI claimed. “As evidenced in the correspondence, the FBI provides critical information to the private sector in an effort to allow them to protect themselves and their customers.”

Experts, including Heritage Foundation senior legal fellow Hans von Spakovsky, warned Fox that the FBI may have violated the First Amendment with its actions.

The FBI apparently sees no issue with its censorship efforts that were happening behind the scenes. “The men and women of the FBI work every day to protect the American public,” the FBI’s statement continued. It’s unclear how the FBI could try to gaslight the American people with a straight face given that the Twitter Files revealed that the Bureau paid the platform over $3.4 million through a “reimbursement” program for helping its censorship efforts.  One of the Twitter accounts that the FBI flagged for the platform was the American-based, right-leaning Right Side Broadcasting Network.

The FBI claimed it didn’t give Twitter employees “specific instructions or details regarding the Hunter Biden laptop story” and pontificated, “We focus on activities attributed to foreign actors, not on the content or narrative,” according to Fox. That seems to be contradicted by the Twitter Files. The FBI reportedly “primed” ex-Twitter executive Yoel Roth for several months to flag the Hunter Biden laptop scandal as content derived from possible “‘hack-and-leak operations’” by state actors.

The FBI’s entanglement with Twitter goes far beyond censorship. Twitter Files Part VII, released by independent journalist Michael Shellenberger, uncovered the FBI’s pressure on Twitter to reveal private user information. One screenshot of an email from FBI special agent Elvis Chan shows Chan asked Twitter to share some personal user information with the FBI, even though he knew that violated Twitter’s terms of service.