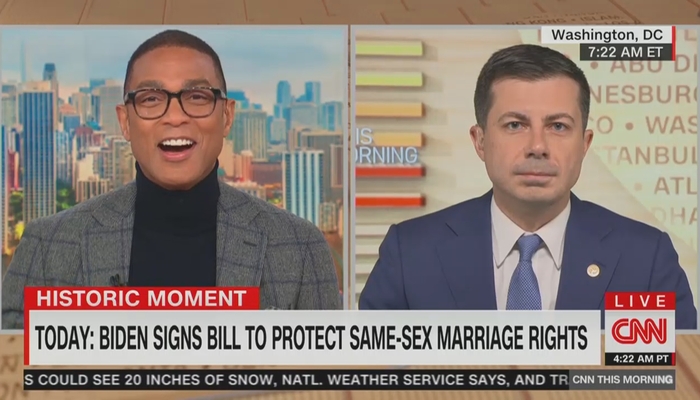 CNN stopped just short of issuing a Breaking News alert. But on today’s CNN This Morning, a seriously self-important anchorman Don Lemon announced that he would be attending the South Lawn signing of the “Respect for Marriage Act.”

At the conclusion of a segment on the matter, it was with great solemnity that Lemon proclaimed:

“I’ll be at the White House today. To witness it. Yes, I’m going to go. To witness it in person. I think it’s important. And my fiancé as well.”

As Lemon was making his momentous announcement—one that the entire country had awaited with bated breath—co-host Poppy Harlow interjected, “you will?”

As if Harlow wasn’t already well aware that her co-host was headed to the White House? Please.

As underlined by his mention that he’ll be attending with his fiance, it seems clear that Lemon will be there not as a reporter, but as a guest. This continues a trend of the melding of the liberal-media/Democrat complex. Last week, in the same mode, we noted that Joe Scarborough and Mika Brzezinski had attended a White House State Dinner, also as guests and not as journalists.

In his role as the first openly gay Cabinet member, Transportation Secretary Pete Buttigieg was a guest later in the show to discuss the bill. A giggly Lemon greeted him with this super-softball question:

“I just have a very human question. I wonder what this means to you, to your husband Chasten, to your twins, Joseph Gus August and Penelope Rose, what this signing means to you and many Americans today?” 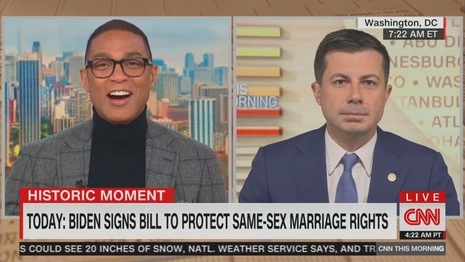 Buttigieg disclosed that the signing comes as a “huge relief.”

Note: as reflected in the screencap, whereas Lemon was all smiles and giggles during his interview of Buttigieg, “Mayor Pete” maintained a very sober mien throughout. This is a guy carefully cultivating his image for the Next Big Thing.

On CNN This Morning, Don Lemon announcing with great solemnity that he would be attending a White House ceremony was sponsored in part by Safelite, GlaxoSmithKline, maker of Trelegy, Pfizer, and Liberty Mutual.

DON LEMON: MJ, very big day for many Americans. Good morning to you.

MJ LEE: That’s right, Don. Good morning. Preparations are currently under way here at the White House for what is expected to be a significant and celebratory bill-signing out on the South Lawn. The signing of that bill, of course, says so much about how much the country has shifted on the issue of same-sex marriage, but also President Biden’s own personal evolution on the issue over the course of decades.

JOE BIDEN: Pride is back at the White House. [Cheers ]

LEE: A history-making day at the Biden White House. President Biden, set to sign into law today a bill that mandates federal protection for same-sex and interracial marriages . . . The legislation passed last week with bipartisan support in both chambers.

LEE: Such a bill seemed improbable for many in Washington, not that long ago.

LEE: But the public push to pass federal protection for same-sex and interracial marriages intensified this year, after the Supreme Court overturned Roe v. Wade . . . Now, I am told by White House officials that that famous Meet the Press Biden moment will be a significant theme today at today’s bill signing. And the guests invited include prominent members of the LGBTQ community, and activists.

And, Don, it goes without saying, for so many of them, what is going to happen this afternoon at the White House has felt like a long time in coming. Don?

LEMON: Right on. Thank you very much, MJ Lee. And straight ahead, we need to talk to the Secretary of Transportation. Pete Buttigieg will join us on the importance of this landmark bill. And we have to remember, Joe Biden is the person that pushed the last administration. There was a reminder of that.

And I’ll be at the White House today.

POPPY HARLOW: You will?

LEMON: Yes. It’s important. I’m going to go to witness it in person. I think it’s really important. And my fiancé as well.

LEMON: So joining us now is Transportation Secretary Pete Buttigieg. He is the first openly-gay Cabinet member in the U.S. to be confirmed by the Senate. Mayor Pete, Secretary Pete [giggles], it’s so good to have you here to discuss this, considering your role and, listen, because of your platform, where you are now, and what you’ve achieved. I just have a very human question. I wonder what this means to you, to your husband Chasten, to your twins, Joseph Gus August and Penelope Rose. What this signing means to you and many Americans today?

PETE BUTTIGIEG: Well, it’s — it’s a huge relief. Look, our marriage has been the cornerstone of our family life. The more so since we’ve become parents to our amazing twins, our son and our daughter.