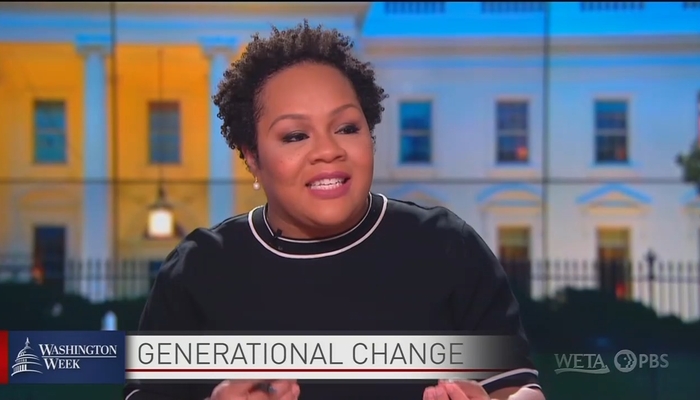 Journalist Matt Taibbi began tweeting out documents three hours later, and not surprisingly, there was no time for it on the evening news shows, including the PBS NewsHour – which airs in Washington at 7 pm. 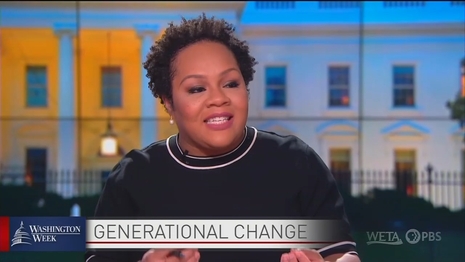 They also skipped it on PBS’s reporter roundtable Washington Week at 8 pm. No one started preparing anything in the afternoon? Maybe these shows were recorded before 6:30?

PBS host Yamiche Alcindor began with a “historic” gush: “For the first time in a generation, there is a new historic group leading the Democratic party in the House. On Wednesday, Democrats voted to elect Hakeem Jeffries of New York as the House Minority Leader of the next Congress. Jeffries is the first black leader of a party in Congress in history.” Then came a soundbite of Jeffries promoting how Democrats “fight for the people.”

By contrast, Alcindor proclaimed “it was a rocky, rocky week for current minority leader Kevin McCarthy.” She noted he hadn’t secured the 218 votes to become House Speaker, since “some hard-liners in the Freedom Caucus, the sort of right-wing part of his party, continue to withhold support.”

Note the Republicans have a fringe of “hardliners,” and the Democrats do not.

When the “Twitter Files” came out on Friday, @PBS couldn’t find it. On Washington Week, @Yamiche was too busy gushing over the “new historic group leading the Democratic Party in the House” and insisting Kevin McCarthy had a “rocky, rocky week” with the Republican “hardliners.” pic.twitter.com/GdIeVrNXBX

Alcindor added that the GOP has been “dealing with the fallout” from Donald Trump having dinner on November 22 with rapper Kanye West and racist Nick Fuentes. She showed a soundbite of McCarthy denouncing Fuentes. The Washington Week show stuck to a ten-day-old story. Fuentes easily trumps Hunter.

Does Joe Biden have any scandals? Not on PBS.

Alcindor turned to CNN’s Nia-Malika Henderson, who cooed that House Democrats had “a really, really smooth transition and you’ve got this younger, fresher face of the party.”

CBS White House correspondent Weijia Jiang added that President Biden is supportive of this transition. Jiang didn’t say anything about how the 80-year-old president is notably out of sync with the party’s “younger, fresher face.”

Michael Bender of The New York Times argued Kevin McCarthy has “problems on his hands,” and that Senate GOP leader Mitch McConnell has about a ten-percent approval rating, but Republicans are keeping these leaders….when they should consider a change.

The only negative note for Biden came on the government forcing the end of a rail strike. underlining the only time Democrats come under fire is for disappointing their left-wing base.

Then came another four minutes or so on Nick Fuentes and Trump, and more hype for the final report of the Pelosi-picked January 6 committee, because Republican problems never end.

When the show ended on DC superstation WETA, then came the pledge drive, and viewers were told to fork over their cash to support this “Peabody Award-winning news analysis series,” which means more to liberal PBS viewers, since Peabodys are for liberals.

The PBS announcers also oozed the show is the oldest news-in-review show on TV, and “it continues to shine with Yamiche Alcindor, one of the most respected journalists working today.” She is? “Since 1967, viewers have come to rely on Washington Week‘s roundtable of award-winning journalists to provide objective reporting and incisive analysis of the major news events of the week.”

The pro-Democrat tilt of this unanimous roundtable is the exact opposite of “objective reporting.” Did they offer “incisive” analysis? Only if it describes journalists biting conservatives hard with their incisors. “Public broadcasting” routinely pummels the Republican half of the country who involuntarily help pay their bills.

PBS pledge sludge: Yamiche Alcindor is “one of the most respected journalists working today….viewers have come to rely on Washington Week’s roundtable of award-winning journalists to provide objective reporting and incisive analysis of the major news events of the week.” pic.twitter.com/yVKYRy4auL

College Board admits defeat at the hands of Ron DeSantis, and liberals are outraged: ‘A win for fascist intimidation’
WashPost ‘Fact Checker’ Admittedly Uses Faulty Data to Dismiss Good Guys With Guns
Tucker Carlson Examines The Strange Destruction Of Food Processing Plants Across The Country (VIDEO)
Woman allegedly met 87-year-old Holocaust survivor on dating site, conned him out of millions that she blew on luxury items
Big Pharma Is Hoarding Over $1 Billion In Payments For Cancelled Vax Doses