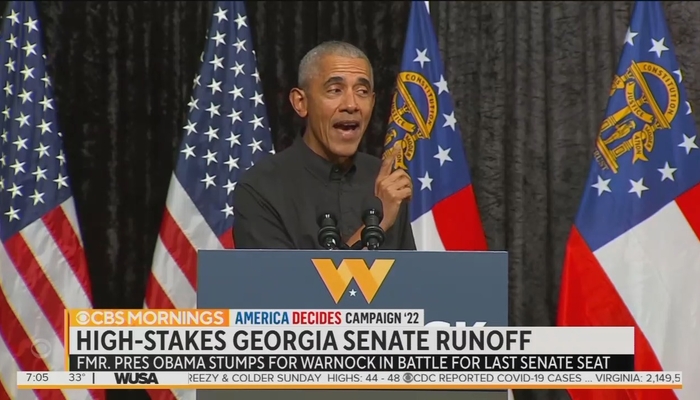 Co-host, Democratic donor, and Obama family friend Gayle King started the newscast with her friend’s trip to the Peach State: “Senator Raphael Warnock is getting some prominent help in trying to fend off a challenge from Republican Herschel Walker. Former President Barack Obama hit the campaign trail in Atlanta to make a very forceful argument on Warnock’s behalf.”

Killion conceded, “yeah, that’s right,” but otherwise moved on with her opening on the long early voting lines before transitioning to a large chunk on the rally: “[L]ast night, the former President urged supporters to keep it up and not get tired or complacent.”

After a clip of Warnock asking for help from supporters, Killion stated: “Hoping to maximize turnout ahead of this closely contested run-up, Senator Raphael Warnock turned to a reliable source.”

Two more Obama clips later, she boasted Obama “took another jab at Warnock’s opponent, Herschel Walker” as juvenile. Obama’s evidence? Walker joking during a speech two weeks ago that he’d want to be a werewolf instead of a vampire.

Pivoting to Walker, Killion simply noted he “held a competing rally with South Carolina Senator Lindsey Graham after casting his own ballot” prior to going all negative on Walker with more hit pieces and the self-centered antics of outgoing Lt. Gov. Jeff Duncan (R), who seems more keen on securing a CNN and MSNBC gig instead of being a conservative or Republican (click “expand”):

KILLION: The former football star also pushed supporters to get to the polls as he fights new allegations. A former girlfriend told The Daily Beast Walker is “unstable,” and records show he took a tax break in Texas intended for primary residences while running in Georgia.

DUNCAN: Herschel Walker will probably go down as one of the worst Republican candidates in — in our party’s history.

DUNCAN: Unfortunately didn’t have anybody that achieved that, you know, respect out of me or my vote.

KILLION: Back in the November general election, about 200,000 voters backed Governor Brian Kemp but didn’t support Walker. And so, that is a critical block for both candidates as Warnock tries to pick them off and Walker tries to win them back. The GOP governor did throw his support behind Walker, campaigning with him recently, and cutting several ads.

ABC’s Good Morning America also covered the race. Co-host and former Clinton official George Stephanopoulos said in the tease that Obama was “back on the campaign trail with four days until final votes” for the “high-stakes runoff.”

Correspondent Steve Osunsami also started with the long lines with Obama soundbites on the significance of Senate Democrats increasing their ranks to 51 versus remaining at 50. Osunami wasn’t as negative on Walker, though he did note “Walker surprised people in his own party when he wasn’t seen on the campaign trail for several days around the Thanksgiving holiday and he’s been keeping even more distance from reporters.”

But in his wrap-up to Stephanopoulos, Osunami gave oxygen to the fact-free Jim Crow 2.0 crowd:

This latest dose of anti-Walker coverage was brought to you by advertisers such as Ashley Homestore (on CBS) and Dick’s Sporting Goods (on ABC). Follow the links to see their contact information at the MRC’s Conservatives Fight Back page.

To see the relevant transcripts from December 2, click here (for ABC) and here (for CBS).

Leftist Privilege Gets Lawyer-Turned-Firebomber Off Easy
America First Legal: Gov’t Agencies, White House Used Foreign Intel Methods to Censor Americans
College Board admits defeat at the hands of Ron DeSantis, and liberals are outraged: ‘A win for fascist intimidation’
The Threat of Woke Corporations and the Response of the Red States
Ford CEO Jim Farley’s frustration builds as he vows to transform the automaker