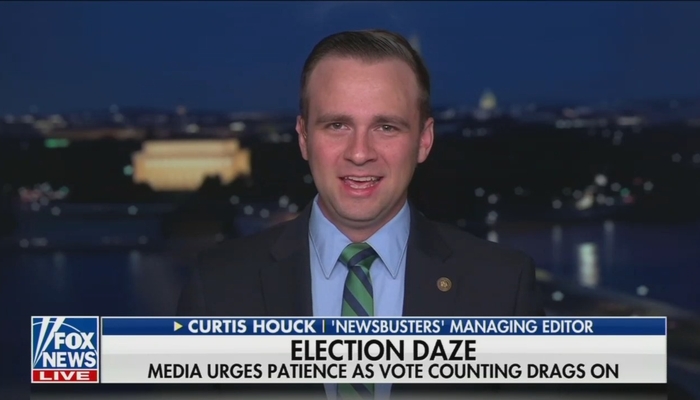 NewsBusters Managing Editor Curtis Houck appeared on Fox News at Night on Friday for their regular segment on the media’s highs and lows of the week. Houck’s low was the media’s “ridiculous” appeals for “patience” as the vote-counting process went on for days and days without resolution. The longer it goes, the more people suspect some fishy business with the ballots.

Fox showed a medley of NBC’s Seth Meyers, CNN’s Ana Cabrera and CNN’s Erin Burnett all begging the public to show “patience” during the glacial pace of vote-counting in Arizona and California. Houck pointed out that the media were merciless to Democrats when they couldn’t competently count the votes of the Iowa caucuses in 2020.

GALLAGHER: I’m old enough to remember when Seth Meyers was funny. And now it’s like lecture time at 11 o’clock or 11:30, whatever time it is. Go ahead, Curtis.

HOUCK: Yes. Well, Trace, I’m old enough to also remember when the media lost their minds when Iowa dropped the ball after the Democratic caucuses crashed and burned in early 2020. It’s not engaging in conspiracy theories to suggest that it shouldn’t take, you know, so long, it shouldn’t take a week to count votes.

As you pointed out earlier in the show with Brian, I mean, this is ridiculous, and in your common sense as well. You know, if we want to have election week, OK, fine. But, you know, you look at Europe, Brazil. Brazil just had a very close runoff. They have the Amazon to count votes in, and they were able to get it turned around same day!

In the U.K., they stay up overnight to get votes counted. It’s embarrassing as as our Bill D’Agostino said, you know, these media journalists saying we need to be patient come off, like, you know, DMV workers or disgruntled kindergarten teachers.

Both Houck and fellow panelist Spencer Brown of Townhall credited Fox News correspondent David Spunt for putting Biden press secretary Karine Jean-Pierre on the defensive over how much it looks like the White House is telling the supposedly independent and apolitical Justice Department what to do.

HOUCK: Yes. This was a major campaign promise of President Biden that his Justice Department won’t be independent. So, it was really interesting. Yes, David Spunt pointed that out. You have the media were serious. They would note this halfway through the Biden presidency that he hasn’t followed through.

Not just on that, but in the exchange, he mentioned January 6 subpoena is another issue where President Biden has put his thumb on the scales as well. So, if the media were fair, they would be pointing this out as well when doing a, you know, midterm scorecard for Joe Biden.

The D’Agostino video compilation on the media begging for “patience” is below.