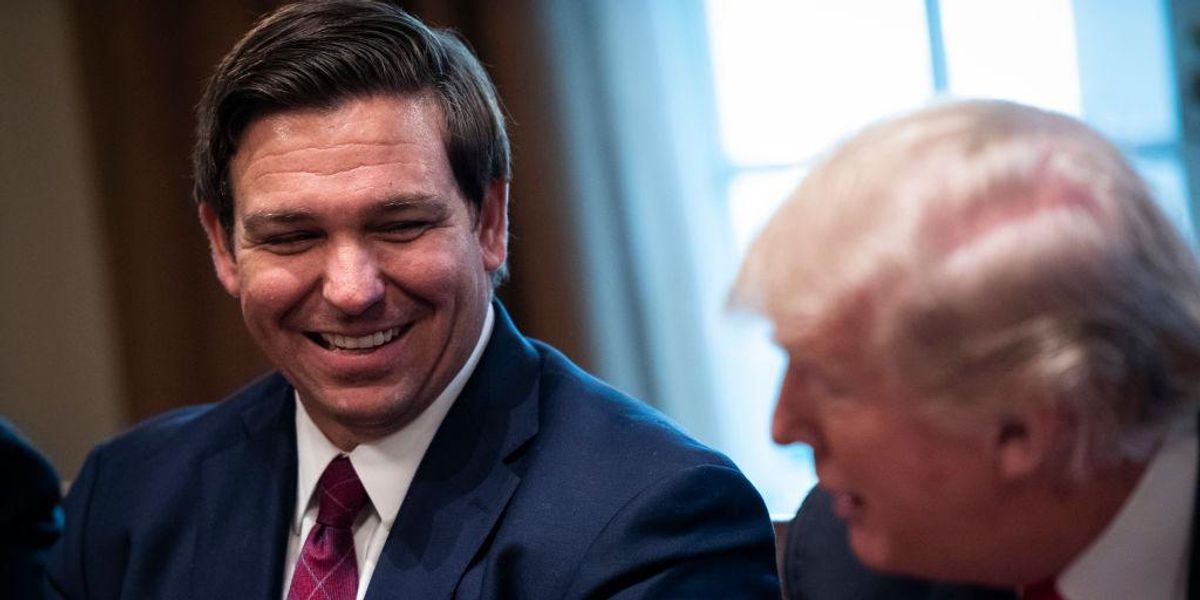 Former President Donald Trump may be damaging himself politically by attacking Florida Gov. Ron DeSantis, a Republican figure who has become enormously popular on the political right.

Trump, who is widely expected to mount another White House bid, has been taking shots at the Sunshine State governor — in addition to referring to him as “Ron DeSanctimonious,” Trump has threatened to dish unflattering information about DeSantis if the governor runs for president. “I think if he runs he could hurt himself very badly,” Trump said, according to the Wall Street Journal. “I think the base would not like it.”

DeSantis clobbered Democratic challenger Charlie Crist during Florida’s gubernatorial contest. While Trump said earlier this week that he had voted for DeSantis, on Thursday, the former president issued a lengthy statement in which he targeted the Florida politician, calling him “an average REPUBLICAN Governor.”

“NewsCorp, which is Fox, the Wall Street Journal, and the no longer great New York Post (bring back Col!), is all in for Governor Ron DeSanctimonious, an average REPUBLICAN Governor with great Public Relations, who didn’t have to close up his State, but did, unlike other Republican Governors, whose overall numbers for a Republican, were just average—middle of the pack—including COVID, and who has the advantage of SUNSHINE, where people from badly run States up North would go no matter who the Governor was, just like I did!” Trump wrote at the beginning of the long statement.

Some on the right took issue with Trump’s rant and were critical of the former president.

“This is exactly why you’re bleeding extremely staunch supporters like me Trump. The great Governor has done nothing ‘sanctimonious’ to deserve that super lame nickname, or these lies about his (much better than yours) Covid policies. DeSantis 2024,” tweeted Storm Paglia of Townhall.

“Why? Why do this, man?” Townhall’s Matt Vespa tweeted about Trump’s statement. In another post, he said that the former president “is just self-destructing.”

“I was genuinely excited to see a primary fight between these two. I think that’s what would be best for the country. But apparently Trump is going to just embarrass himself and go down in flames and I’ll be honest, it saddens me a little. Not how the Trump era should end,” Jesse Kelly tweeted. “If Trump is dumb enough to attack the guy EVERY Republican in America is currently happy with, this primary is already over. He’s gonna lose at least half his support to DeSantis overnight,” he added in another tweet.

u201cI was genuinely excited to see a primary fight between these two. I think thatu2019s what would be best for the country. nnBut apparently Trump is going to just embarrass himself and go down in flames and Iu2019ll be honest, it saddens me a little. Not how the Trump era should end.u201d

“Yikes. If this is real, Trump might have just cost himself the primary in 2024,” Justin T. Haskins tweeted.

“I voted for Trump twice and campaigned for him. He did some great things in office. But Trump’s selfishness really hurt us this election and it’s time to move on from him. He’s playing right into Democrats’ hands right now by attacking DeSantis and he’s lost me,” Caleb Hull tweeted.

u201cI voted for Trump twice and campaigned for him. He did some great things in office. But Trumpu2019s selfishness really hurt us this election and itu2019s time to move on from him. Heu2019s playing right into Democratsu2019 hands right now by attacking DeSantis and heu2019s lost me.u201d

Don Lemon Goes Soft on Antisemitism: ‘Whether You Agree With Kyrie Irving Or Not…’
‘Like his soul was leaving his body’: Teen rescues dad who was crushed under truck
MSNBC’s Reid: ‘Champion Vote Suppressor’ Kemp No Different Than Trump
Tyrant Zelensky to Ban Ukrainian Church After He Bans Media Outlets and Opposition Party (VIDEO)
NY Times Reporter Revels in Warnock Ad: Walker Remarks Spur ‘Disbelief and Embarrassment’