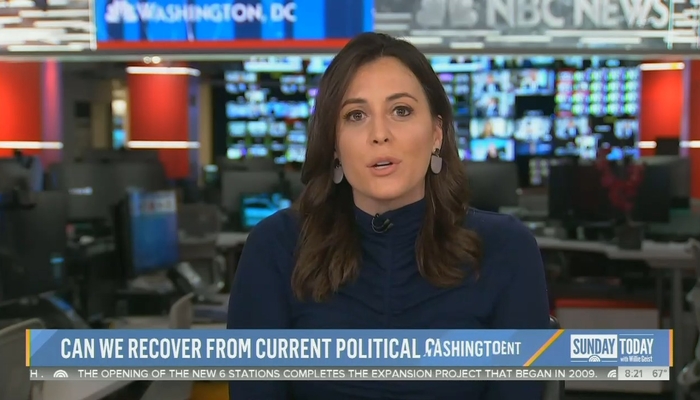 We have witnessed two years of journalism centered around the notion that Republican Party was a collective of violent election-denying rioters and Jim Crow segregationists trying to suppress the black vote. Somehow, journalists find it shocking that the country is polarized. On Sunday Today, NBC reporter Hallie Jackson announced that their latest polling showed “80 percent of voters in both parties think the other side is going to destroy America. And our pollsters say many people are being driven to cast their ballots this year out of anger, out of fear.”

To be more precise, NBC asked voters whether they believed the Democratic or Republican Party agendas “pose a threat that, if not stopped, will destroy America as we know it.” Eighty-one percent of Democrats and 79 percent of Republicans chose the disaster-movie scenario.

As NBC analyst Dante Chinni concluded, “When you see elections in those terms, the vitriol is bound to be intense. It’s hard to shake hands at the end and vow to do better next time, if, in the minds of your voters, there may not be a next time.”

Bizarrely, Jackson suggested on Sunday that the “solution” to this polarization could be groups led by Adam Kinzinger and Liz Cheney…as if the House January 6 Very Select Committee hasn’t been the epicenter of the media’s polarizing narrative about the Republicans killing democracy.

Jackson worried out loud to Willie Geist: “Are those groups gonna actually get any traction, Willie? We just don’t know yet.” The media spent the last two years trying to give them traction.

The liberal media should feel free to polarize the public and tell them constantly – alongside Cheney and Kinzinger – that the Republican Party should be stripped down to the studs over January 6. The First Amendment allows them to be obnoxious cartoonists of the GOP. But they shouldn’t then pretend that this full-throated advocacy is not polarizing or nonpartisan, when this message sounds to many voters like a Democratic National Committee strategy memo.

The entire construction of Pelosi’s January 6 panel was partisan and polarizing. The Republican minority was not allowed to select its own members, and no one in those nationally televised hearings was going to be allowed to offer a single dissenting word from the dominant narrative.

The media’s coverage of this committee was just as much of an echo chamber. The Sunday show anchors brought on committee members to underline their anti-Republican talking points, and rarely to challenge them.

If the media decided that they could and should play a role in “de-polarizing” the country or trying to forge a calmer consensus, they should start with their own product. They could nudge all politicians toward working together and finding common ground.

But their Trump-era business model is built for a partisan audience, echoing inside a self-righteous bubble. If your badly disguised Democrat newspaper’s motto is “Democracy Dies in Darkness,” you’re not aiding a more bipartisan governing atmosphere. You’re conducting a permanent political campaign.

The liberal media are free to respond to the midterm elections by doubling down on their current path. They can keep up the partisan battle, and continue to rely on fear and panic. But they should know that glumly warning about American polarization looks ridiculous. And they should know that in the years to come, no one should mistakenly think of them as disinterested moderators or referees of a two-party system.