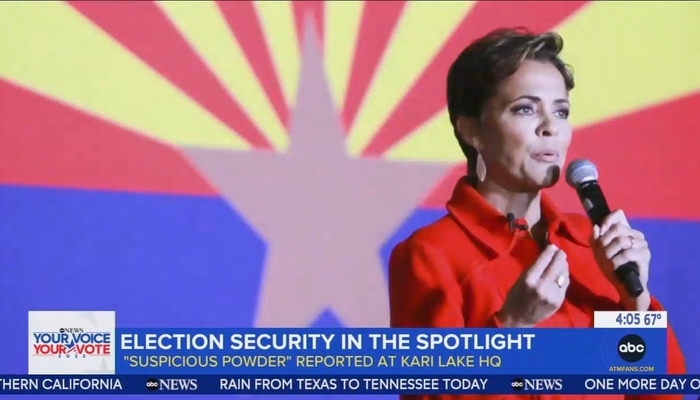 The liberal media have made concerns about threats to election workers and (Democratic) candidates a talking point, but on this Republican threat, ABC and CBS only spent a combined 21 seconds on their flagship Sunday evening and Monday morning newscasts, excluding teases.

The total only marginally improved when you include their lowly, overnight newscasts with the total jumping to one minute and 20 seconds (excluding teases).

ABC’s World News Tonight was the first on scene Sunday with only 12 seconds from correspondent MaryAlice Parks: “And just yesterday, like you said, there was a scare at the headquarters of Arizona gubernatorial candidate Kari Lake. The FBI, hazmat, and bomb squad all called in after an alleged suspicious white substance was found in the mail.”

CBS Mornings was only the second major network newscast to mention the situation. Co-host Nate Burleson said in a tease that “[t]ensions are rising in Arizona where a suspicious package arrived at the Phoenix headquarters of GOP candidate for Governor Kari Lake.”

In the actual newscast, correspondent Kris Van Cleave spent nine seconds in a larger report about the tight gubernatorial and Senate races in the Grand Canyon State and how Lake and Senate GOP candidate Blake Masters view the 2020 election: “Over the weekend, a white powder was sent to the Lake campaign office. Police are investigating that. The Lake campaign telling CBS News we cannot be intimidated.”

Both stayed on the case in the middle of the night. ABC’s World News Now had a 11-second brief via co-host Andrea Fujii:

There are also growing fears about election security heading into the midterms. Just yesterday, an envelope with a suspicious white powder was found at the campaign headquarters of Arizona gubernatorial candidate Kari Lake.

Fujii had another brief an hour later on America This Morning, adding 22 seconds to the tally. She explained that the “power was found in the mail, but the FBI has refuted the campaign’s claim that the substance was being tested at the FBI lab in Quantico, Virginia.”

Well, another battleground with key races is Arizona, and in a closely contested race for governor, there’s now an investigation into a suspicious envelope sent to the Republican candidate. This was the scene at the Phoenix campaign headquarters of Kari Lake. A campaign official said a staffer opened an envelope containing a suspicious white powder. That staffer is under medical supervision and it’s not clear yet what was in the envelope.

The powder could turn out to be harmless, but it’s safe to say the major network newscast total would be far larger than 21 seconds over two sets of shows if this had happened to a Democrat.