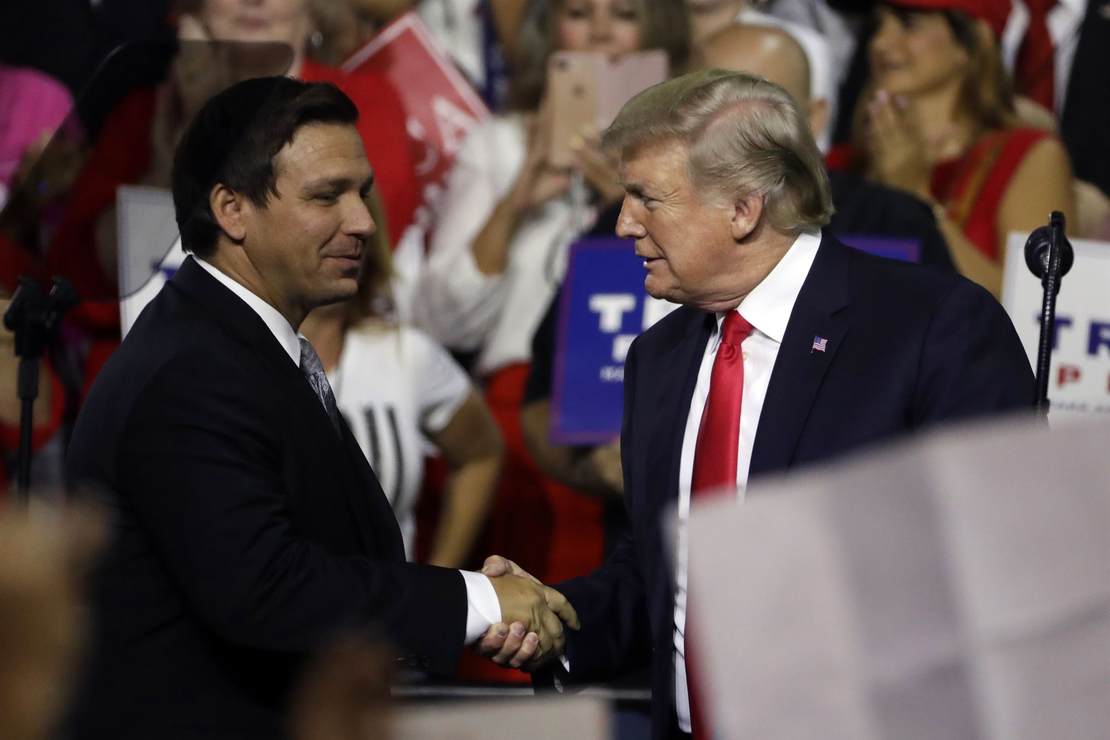 Donald Trump was in Pennsylvania Saturday night, campaigning for Senate candidate Dr. Mehmet Oz and gubernatorial candidate Doug Mastriano, when he gave a not-so-subtle warning to Ron DeSantis about 2024.

In what should have been a speech limited to motivating voters to get out the vote, Trump couldn’t help himself and took a petty swipe at Florida Governor Ron DeSantis while boasting about his own 2024 poll numbers.

“Trump at 71, Ron DeSanctimonious at 10 percent, Mike Pence at 7 percent. … Oh, Mike’s doing better than I thought,” Trump told the crowd. Trump is known for giving people pejorative nicknames when he sees them as enemies or threats.

During the 2016 GOP primary, he mocked Sen. Marco Rubio as “Little Marco,” Jeb Bush as “Low Energy Jeb,” and Sen. Ted Cruz as “Lyin’ Ted.” He often referred to Hillary Clinton as “Crooked Hillary” and Sen. Elizabeth Warren as “Pocahontas.” Other notable nicknames include “Shifty Schiff” for Adam Schiff, “Rocket Man” for Kim Jong-Un, and “Cryin’ Chuck” for Chuck Schumer — among many others. So, make no mistake about it, Trump calling DeSantis “DeSanctimonious” was a tell-tale sign that he is ready to go to the pavement with DeSantis should the popular governor consider running for president in 2024.

Related: Trump Will Be in Florida Two Days Before the Election. DeSantis Wasn’t Invited

DeSantis has been seen for some time as a strong contender for the presidency and someone who could be a popular alternative to Trump in a GOP primary.

This is not the first time Trump has expressed confidence in his ability to defeat DeSantis or any other Republican who might run in 2024. “If I faced [DeSantis], I’d beat him like I would beat everyone else,” he said last year.

Trump is reportedly looking to announce his 2024 candidacy later this month. This announcement would be on the early side, likely because Trump wants to dissuade any other Republican challengers from running against him.

While Trump has a substantial edge in various national polls of GOP voters, DeSantis has shown strength against Trump in various state surveys and straw polls. Earlier this year, DeSantis edged Trump in the 2024 straw poll at the Wisconsin GOP convention, 38% to 32%, and he beat Trump in the multiple-choice 2024 straw poll at the Western Conservative Summit. DeSantis and Trump were the far-away favorites of GOP voters, with 74% favoring DeSantis and 71% choosing Trump. DeSantis has also led Trump in hypothetical primary match-ups in Georgia and Ohio.

Recent polls have also shown DeSantis’s stock rising among Republican voters. An ABC News/Ipsos poll from last month found that more Republican voters believe DeSantis “should have a great or good deal of influence in the future direction of the GOP” than Trump.

DeSantis has been an extremely successful conservative leader in Florida, unafraid to fight the tough battles, be it against the transgender cult or woke Disney. His leadership during Hurricane Ian was widely praised, and he seems destined for the White House — whenever he wants to run. DeSantis is now running for reelection as governor and isn’t even talking about 2024, but that could change after Tuesday. A potential Trump/DeSantis primary rivalry threatens to split the GOP and possibly undermine the party’s chances of retaking the White House in 2024.

Trump no doubt sees himself as the de facto  2024 Republican nominee because of the election integrity problems that plagued the 2020 election. But is Trump willing to destroy the GOP to placate his ego? Both parties have had contentious presidential primaries in the past. Still, they have managed to pull together in the general election, but Trump’s ego and sense of entitlement to the nomination could fracture the party in an unprecedented way.

For a long time, Trump was the only 2024 presidential contender I thought I’d support. But he repeatedly makes DeSantis the more attractive option. Trump was an effective president, but he was also frequently his own greatest enemy. Since leaving the White House, in particular, he has alienated many people who were previously allies. His ego-driven attacks have tarnished even his most productive collaborations, such as with Sen. Mitch McConnell or former Defense Secretary Jim Mattis. Trump and DeSantis have long been allies, and this petty attack on DeSantis by Trump only contributes to the Florida Gov looking like the safer and stronger alternative for the GOP in 2024.