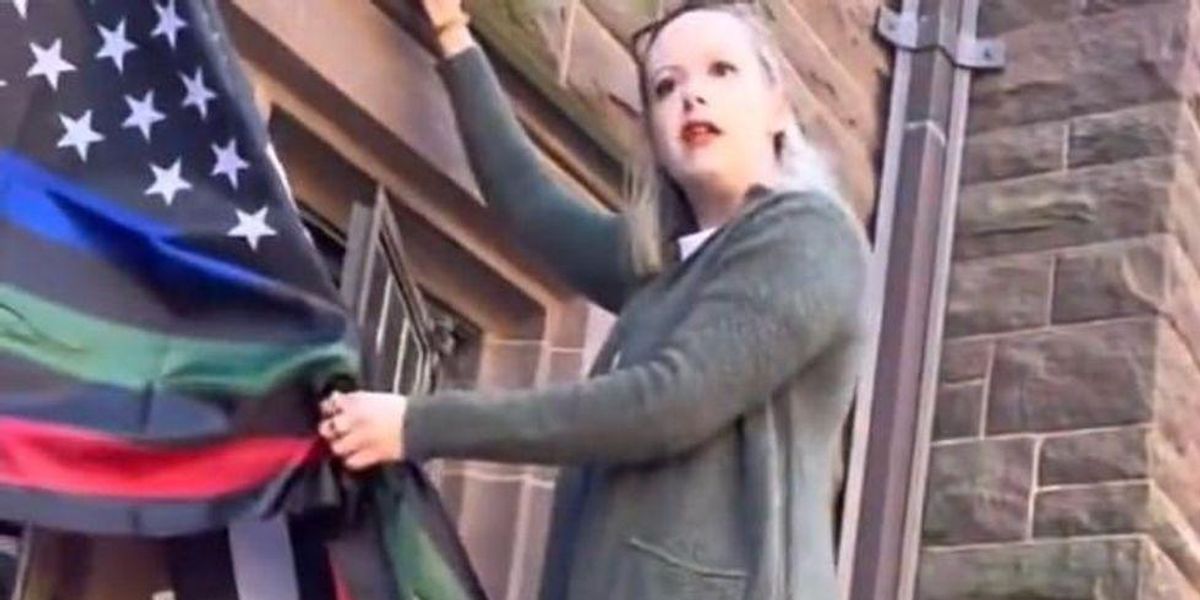 Two American college students were outraged the other day when school officials forcibly removed the patriotic flags that they had hung outside their dorm room, even as pride flags outside other dorm rooms were left unmolested.

On Monday, the Twitter account Libs of TikTok shared a video, filmed by one of the unnamed students, showing a disgruntled woman climbing a ladder to remove the flags from outside a dorm room at Trinity College in Hartford, Connecticut. Though some of the dialogue on the video is difficult to hear, the woman who removed the flags told the objecting students that they had already been warned about the flags.

“You were directed to take it down,” the woman said.

The young men then continued to protest the removal of the two flags — a Gadsden “Don’t Tread on Me” flag and an American flag with colors indicating support for first responders — which they had hung outside their dorm window. Eventually, the frustrated woman ordered them to stop filming her.

“[P]ut your phone away,” she demanded.

The students, however, refused to comply.

“Absolutely not,” one student stated. “I have every right to record, and you know that. This is America. We have the First Amendment right to freedom of speech, freedom of expression. I don’t know why you’re taking our flags down.”

When the students continued to argue, the woman directed them to take their grievances to the dean.

At one point in the video, the camera panned to an older woman who is reportedly the director of housing operations. Her role in the incident is unclear, but she appears to approve of the flag removal process.

The woman who removed the flags then attempted to confiscate them and told the students they could retrieve them from the dean’s office. One of the students took the flags back though, claiming they were his property since he had purchased them.

“This is stealing,” he told her.

Despite the aggressive removal of the students’ patriotic flags, reports indicate that Trinity has permitted other flags to fly on campus. According to a screenshot of an old tweet ostensibly issued by the college itself, Trinity College has openly displayed pride flags on campus in the past. In fact, the students on the video alleged that other flags in the vicinity remained on display, even as their patriotic flags were removed. Libs of TikTok indicated in the tweet that those other flags were pride flags.

“[Other students are] being asked, but ours are being ripped off,” one of the students asserted.

The Daily Caller claimed to have spoken to one administrator who admitted that the rules have been enforced unevenly.

The Trinity student handbook does forbid “objects of any type (including liquid)” from being “thrown, dropped, pushed out of, placed outside of, or allowed to fall from any residential building window.”

The Foundation for Individual Rights and Expression, a free speech organization, sent the school a letter on Tuesday to inquire about the incident.

“[W]hile [Trinity] may impose reasonable time, place, and manner restrictions on the display of flags and other expressive material on campus,” FIRE wrote, “the free speech promises it makes to students preclude it from selectively enforcing those policies based on the viewpoint expressed.”