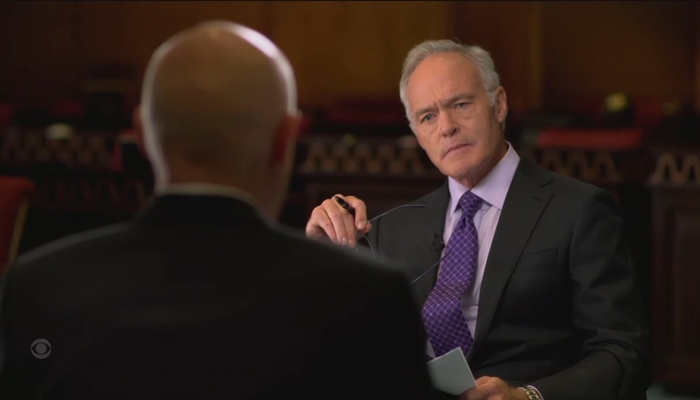 As the midterm elections get closer, it’s obvious that the 60 Minutes crew is going to end with an aggressively partisan spin. We call this “Bias by Story Selection.” On Sunday night, Scott Pelley – the former CBS Evening News anchor who often trashed Trump for “tweeting tantrums and falsehoods” – spent the first 19 minutes of the show trashing the pro-Trump “election deniers” in Arizona and how they’re ruining the Republican Party. Let’s start at the end:

SCOTT PELLEY (voiceover): Nationwide, 190 election deniers are running for the U.S. House and 14 for the U.S. Senate, according to the Brookings Institution. Mark Brnovich lost his primary to a denier and so did Rusty Bowers, which may come as a relief.

MAN #4: Rusty Bowers is a pedophile.

PELLEY: He had to fend them off — a man with a pistol — demonstrators in their own armored car. And at the State Capitol, on January 6, 2021, they came with rifles and a guillotine. In Arizona, when belief in the vote eroded, this is what filled the void.

PELLEY (on camera): Has the Republican Party that you’ve known all your life been hijacked?

BOWERS: It`s a large group of them that is doing the hijacking. I just don`t think it`s a majority. Its effectiveness as a party and its legitimacy in public discourse is grossly undermined by how they`ve acted in this state.

Let’s stipulate that CBS is right that Biden won Arizona, and Trump fans haven’t proven otherwise. Some of them are very mean people. But Pelley and CBS want the viewer to believe the entire Republican Party has lost all effectiveness and legitimacy. Every Republican should be tarred with the same brush.

Now let’s rewind back to late October 2020. What did 60 Minutes do at that juncture? Why, Norah O’Donnell was tossing Joe Biden softballs: ”Do you believe the recent leak of material allegedly from Hunter’s computer is part of a Russian disinformation campaign?”

How does that look now, after liberal newspapers verified the Hunter Biden laptop contents, proving Biden fraternized with Hunter’s clients?

PS: Back in 2000, 60 Minutes devoted a whole segment to author J.H. Hatfield and his book trashing George W. Bush called Fortunate Son. They put on this interview despite Hatfield being unable to prove Bush was arrested for cocaine possession and despite Hatfield paying for a hit man.

The Biden Admin Just Made Woke Investing Even Easier
Fawning NY Times’ ‘Review’ of Michelle Obama’s New Book Is an Embarrassment
WATCH: CNN Stunned As Their Narrative on Gay Club Shooter Gets Crushed
Musk: Twitter Has ‘Freedom of Speech,’ Not ‘Freedom of Reach’
‘The People Have Spoken’: Musk Announces Mass ‘Amnesty’ For Most Banned Accounts After Poll