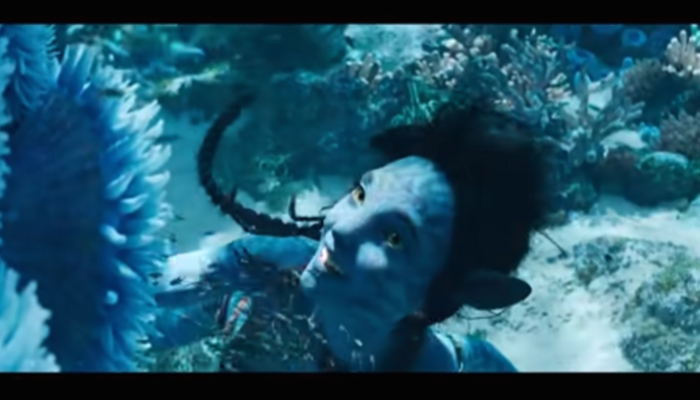 Director James Cameron may be Hollywood’s most eco-conscious artist.

Leonardo DiCaprio unofficially held that title for years, capping it with his 2016 Oscar speech that doubled as a Climate Change screed.

Now, Cameron is ready to take the mantle via Avatar: The Way of Water.

The belated sequel to 2009’s smash doesn’t hit theaters until Dec. 16, but the film’s official YouTube channel is jumping the messaging gun.

The clip, titled, Avatar: The Way of Water — Keep Our Oceans Amazing, lets the film’s cast members share how we can ensure the oceans remain a healthy part of the global ecosystem.

“The expanding world of ‘Avatar’ allows us to appreciate the beauty of our bios here on earth,” says Sam Worthington, who plays Jake Sully in the franchise.

The word “diverse” is spoken three times in the 1:15 minute clip.

The film itself remains a mystery, with the trailer and official studio description light on specifics.

Set more than a decade after the events of the first film, “Avatar: The Way of Water” begins to tell the story of the Sully family, the trouble that follows them, the lengths they go to keep each other safe, the battles they fight to stay alive and the tragedies they endure.

What’s obvious, though, is that Cameron’s environmental activism will be front and center in the film. That was the case with the 2009 original, and he’s been vocal on the topic for years.

He even tasked his crew to consume an all-vegan diet on the film’s set, although stars could wander away for a Whopper should they need a meaty protein blast.

Some of the director’s views on the subject can be extreme. He publicly praised those who use violence to promote green measures. When a film critic dubbed “Avatar” “the perfect eco-terrorism recruiting tool” he warmed to the critique.

“I believe in eco-terrorism,” he replied.

Cameron later sounded a more gentle note, albeit one with little faith in our elected leaders saving the planet.

I believe where I can be the most effective is at a grassroots level, which is inspiring and informing people, and using my cinematic skills to make a point.

It’s disturbing, though, how both Di Caprio and Cameron don’t always practice what they preach. The “Titanic” star’s eco-hypocrisy is the stuff of show biz legends. Here is just one example:

He is a celebrity UN climate change ambassador who has called the issue ‘the most urgent threat facing our entire species’.

But while he urges fans to take action, Leonardo DiCaprio has been spending time on one of the world’s biggest, and most environmentally unfriendly, superyachts.

Cameron, in turn, also seems unable to live up to his own philosophies. He’s been hounded by critics for a personal lifestyle they say clashes with his enviro-bromides.

“We will have to learn to live with less,” Cameron reportedly told the Los Angeles Times.

Two years ago, the director put his sprawling mansion up for sale with a $25 million price tag.