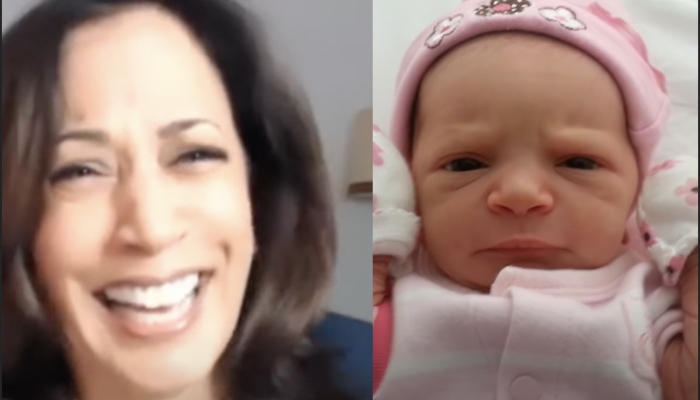 I really didn’t know that there were more than one version of the Holy Bible. One that supports the slaughter of the unborn and one that doesn’t … oh wait.

Most recently, on October 25, she was at the University of New Mexico in Albuquerque talked with NM Governor Michelle Lujan Grisham and a local doctor, Dr. Eve Espey. The trio spoke on protecting the right to murder innocent children in New Mexico and beyond.

Harris reiterated her regular talking points in order to help justify her enthusiastic support for abortion.

Ah, that’s one of her favorites.

Harris had the same line when she spoke with President Joe Biden at a Task Force on Reproductive Healthcare Access meeting earlier this month.

“One does not have to abandon their faith or beliefs to agree that the government should not be making these decisions for the women of America,” Harris said.

Earlier in October, Harris told the same thing to the Planned Parenthood president at a conference in Connecticut. When asked about what to say to a woman who is religious but wants an abortion, Harris said, “one does not have to abandon their faith or their beliefs to agree that the government should not be making that decision for her. It’s literally that basic.”

Back in September, Harris was invited to speak at the National Baptist Convention in Houston, TX where she told a room full of faith leaders that supporting abortion is in line with biblical principles.

A broken record, and completely incorrect.

The Christian faith recognizes the intrinsic value of life at the moment of conception. It’s a grave evil to murder an innocent child, yet Harris seems to think her Christian faith doesn’t need to be neglected in order to support abortion. Harris is just trying to justify her claims by pretending, or convincing herself and others that the Bible supports abortion.

I’ve read the whole thing, and I can assure you, it doesn’t.

It’s blasphemy against God for Harris to be manipulating the words of the Holy Bible to help push an anti-life agenda, but given her and her accomplices track record, it’s not surprising.