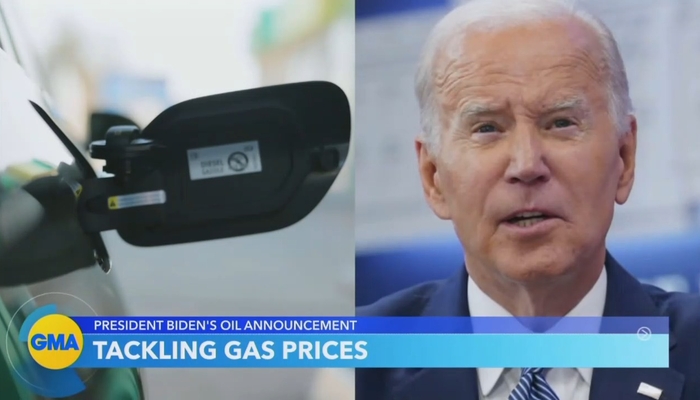 Hours before President Biden’s formal announcement that he’s releasing a puny 15 million barrels of oil from the Strategic Petroleum Reserve (SPR), the major broadcast networks of ABC, CBS, and NBC heralded this nonsensical effort to take oil from a collection meant for serious emergencies and use it to try and rescue Biden and his party’s chances in the midterm elections.

ABC’s Good Morning America was most enthused. Co-host Robin Roberts gushed in a tease that they’ll cover “[h]ow President Biden is taking on” and “tackling” “rising prices and the other major issues taking center stage as we count down to the midterm elections.”

Tossing to senior White House correspondent Mary Bruce, Roberts reported with the same objectivity as if she was a staffer with the Democratic National Committee: “[W]e’re going to begin with President Biden set to address the issue of gas prices later today announcing action from the administration in an effort to drive prices down with inflation, as we know, rising across the board.”

Always one to peddle Team Biden’s narratives, Bruce shared that Biden would “be announcing more steps to try to ease gas prices and voters’ concerns about rising costs” with 15 million barrels of oil from reserves even though the U.S. goes through “about 20 million barrels every day.”

“[H]e is going to go after oil companies again, putting them on notice urging them to lower costs to their customers,” she added.

Bruce concluded by insisting “Biden is well aware that the economy, inflation, rising gas prices are top of mind for voters and he is hoping this will calm some of voters’ fears or, at the very least, show that he is taking steps to try and tackle all of this.” This was despite the fact that, if his party keeps Congress, Biden will make abortion his top priority.

Rooting for the White House, co-host Michael Strahan responded: “I think we all hope it calms everything down.”

Following more propaganda in a 7:30 a.m. Eastern news brief and tease at 8:00 a.m. Eastern, the show brought back Bruce for her to repeat the regime’s directives that they want voters to know Biden is trying. CBS Mornings was also in on the act. Co-host Nate Burleson teased a report by framing high gas prices as perilous for Democrats, not the American people: “Coming up, the latest White House response to high gas prices. One of the issues hurting Democrats in the run-up to next month’s elections.”

Co-host and Democratic donor Gayle King began by saying “it seems” as though “the state of the economy” is “the top issue for voters” with gas prices and inflation playing a key role.

Back from maternity leave, senior White House correspondent Weijia Jiang noted that a release from the SPR is “not exactly new” and wouldn’t “make a significant difference at the pumps”.

Jiang also conceded this was political theater for Democrats:

With just about three weeks left to go before the midterms, they are really hoping that this message resonates with voters, that they are doing everything that they can, but the fact is those prices are climbing.

Like a good foot soldier, King followed up: “So, is the President, Weijia, doing anything else to entice voters as we get ready to go to the polls?” “Yes, Gayle. He is vowing to make abortion rights the top priority…if Democrats maintain control of Congress…He’s urging voters to factor in the Supreme Court’s decision to overturn Roe vs. Wade,” Jiang replied before making clear it wouldn’t happen without 60 Senate Democrats.

NBC’s Today and 3rd Hour of Today tucked in this story to segments about holiday travel.

Co-host Savannah Guthrie teased: “Pressure at the pump. Gas prices rising yet again. The President set to announce new steps today aimed at lowering costs. What you need to know straight ahead.”

On the former, correspondent Tom Costello boasted that Biden’s move “could” spell “relief” and “less pain at the pump,” but on the latter, Costello admitted this was “done for domestic political consumption going into the midterms” and “a lot of oil analysts think that’s going to have a negligible impact”.

Tuesday’s White House PR push masquerading as journalism was made possible thanks to the endorsement of advertisers such as Chewy (on CBS), Discover (on ABC), and Progressive (on NBC). Follow the links to see their contact information at the MRC’s Conservatives Fight Back page.