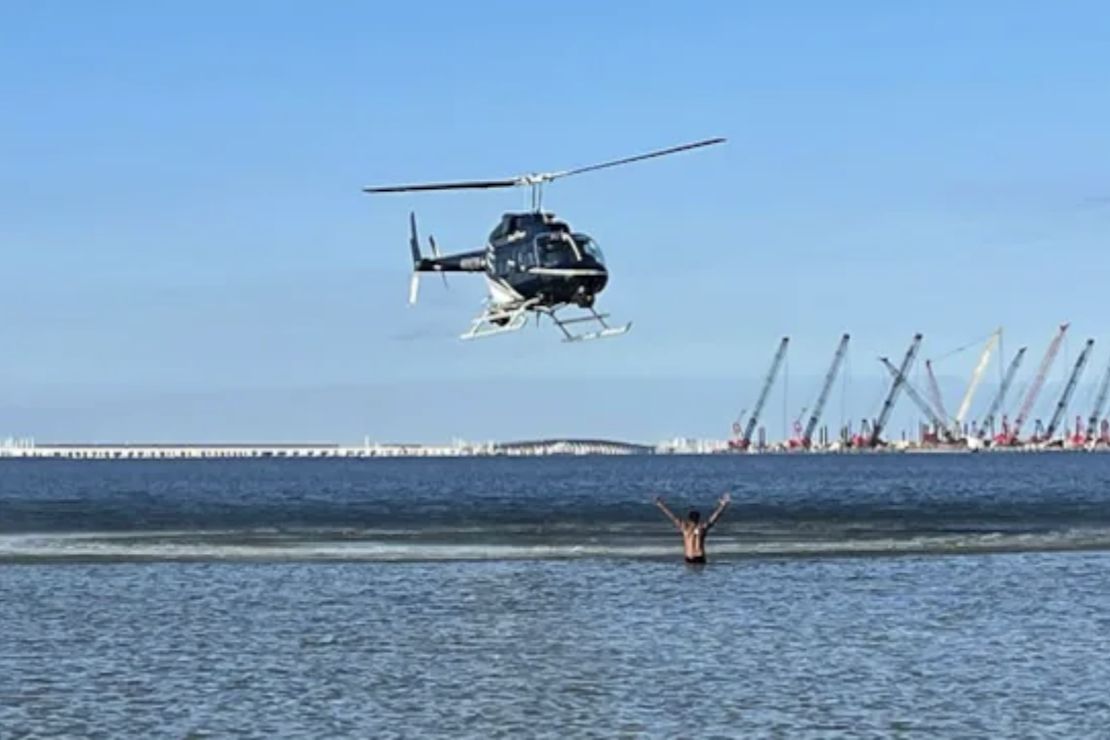 I was fortunate enough to learn in my teens this one very valuable lesson: Helicopters are faster than people. And the Russian ones look really scary and are bristling with missile pods. They’re pretty much going to get you.

Florida Man apparently never saw Red Dawn or Rambo III as a kid. Such a pity:

After a Florida man allegedly stole a woman’s wallet and jumped into Tampa Bay to avoid being caught, Tampa police officers did not give up their pursuit. Dewayne Dean, a 32-year-old, was arrested and brought into custody after making it roughly 200 feet offshore. When the cops found him, Dean was on the water’s edge and made an attempt to swim away from the cops to avoid capture. But the Tampa Police Department pursued him by chopper and ultimately caught up with him.

Giving a Little Something Back

This is really sweet:

Florida Woman is offering free hugs to anyone needing them following Hurricane Ian decimating parts of the Gulf Coast.

Lindsay says since the sign was hung, people have been taking her up on the offer, telling NBC 2 News “we had a whole group of electrical linemen come,” adding that many others have approached her as well.

Sure, it’s adorable when Florida Woman does it, but when I paint “free hugs” on the side of my van and cruise around the neighborhood, I get shot at.

Sadly, an arrest scene like this one is uncommon:

The deputy asked Florida Man if he had drugs on him, and he pulled out a “bottle cap and an O-ring.” FM threw the bottle cap away from the deputy’s patrol car in an attempt to tamper with evidence, deputies said.

After searching Florida Man’s pockets, the deputy found a green plastic container in his right front pants pocket with two separate plastic bags, each filled with four grams of fentanyl.

This was his 12th booking at Flagler County jail in the last nine years, and… hey, look at that mugshot again. Are we sure that’s Florida Man and not Hugh Laurie on a bender?

Any Port in a Storm

It’s so much easier, most of the time, I think, just to follow the evacuation order:

George Andrad, a sous chef who lived on the bottom floor of a now-destroyed Fort Myers home, told NBC affiliate WBBH that he rode out the storm by climbing into a refrigerator and using it as an improvised life raft.

The water continued to rise until it began to reach the ceiling of the second floor.

“It takes me floating, and then it’s like ‘boom’ hit the ceiling, and I’m like, ‘Oh God, I’m done,’” Andrad recalled.

Andrad told the news outlet he bobbed in the water like a buoy for five excruciatingly long minutes. Luckily, as soon as the storm surge neared the ceiling, it reversed course.

Glad you survived, Florida Man. But seriously, just evacuate next time, okay? I live in an area susceptible to wildfires, and when the pre-evacuation warning comes in, Mrs. VodkaPundit and I start packing the essentials.

This one is so weird that we have to do something a little different with the scoring. For the first time ever, I’m going to award one negative point to balance out the positive points FM deserves.

SCORE: -1 for WTF Were You Even THINKING? but +3 for Sheer Awesomeness
RUNNING TOTAL: 14 FMF Points.

I Swear I Have Never Done This

The Okaloosa County Sheriff’s Office said in a news release that a witness saw a vehicle all over the road, and suspected the driver was impaired. The witness cut off the vehicle and noticed that a child was driving the car. The witness then got the child to get into the passenger seat and parked the car in a nearby parking lot.

Yeah, the driver wasn’t impaired. They just had trouble seeing over the dash and working the pedals at the same time. At least, I assume, it wasn’t a stick.

This one was even weirder than I thought at first. Wait’ll you get to the last paragraph:

“We want to express our sincere gratitude to the witness who noticed something was wrong and intervened, potentially preventing a tragedy involving a child,” Okaloosa County Sheriff Eric Aden said.

Deputies said the 9-year-old told them that Florida Man, 22, had asked the child to drive him home, and even pointed out directions along the nearly 7-mile trip. When the witness stopped the car, the child said he was on his way back to his own home alone, and had driven nearly 3 miles.

I know the situation is horrible, inexcusable, and all that, but big props to the kid for nearly getting himself home.

SCORE: Drugs/Alcohol, Vehicular Madness, Getting Caught Stupidly, plus a bonus Awesome Point to the kid for trying his best in a bad situation.
RUNNING TOTAL: 18 FMF Points.

Things are still a little slow in Florida after Hurricane Ian, so we only have five scored stories this week. That’s 18 points total for an average of 3.6 per story.

Lower than most weeks but pretty impressive, given the circumstances.

Meanwhile, in Wherever the Hell This Was…

Courtesy of Annie Oakley at Not The Bee who quipped, “You can shoot like a gangster or hit your target, but you can’t do both!”

Man thrown over the side of a bridge after Chargers game in wild incident caught on video says his attacker has still not been arrested by police
GOP Senators Press Homeland Security Chief on Why 63,500 Cases Against Illegal Aliens Were Dropped
James Woods To Sue Twitter Over DNC-Ordered Censorship
Katie Hobbs’ Office Defends Asking Twitter To Take Down Posts Criticizing Them
First Gen Z person elected to Congress whines when rental application is denied over his poor credit