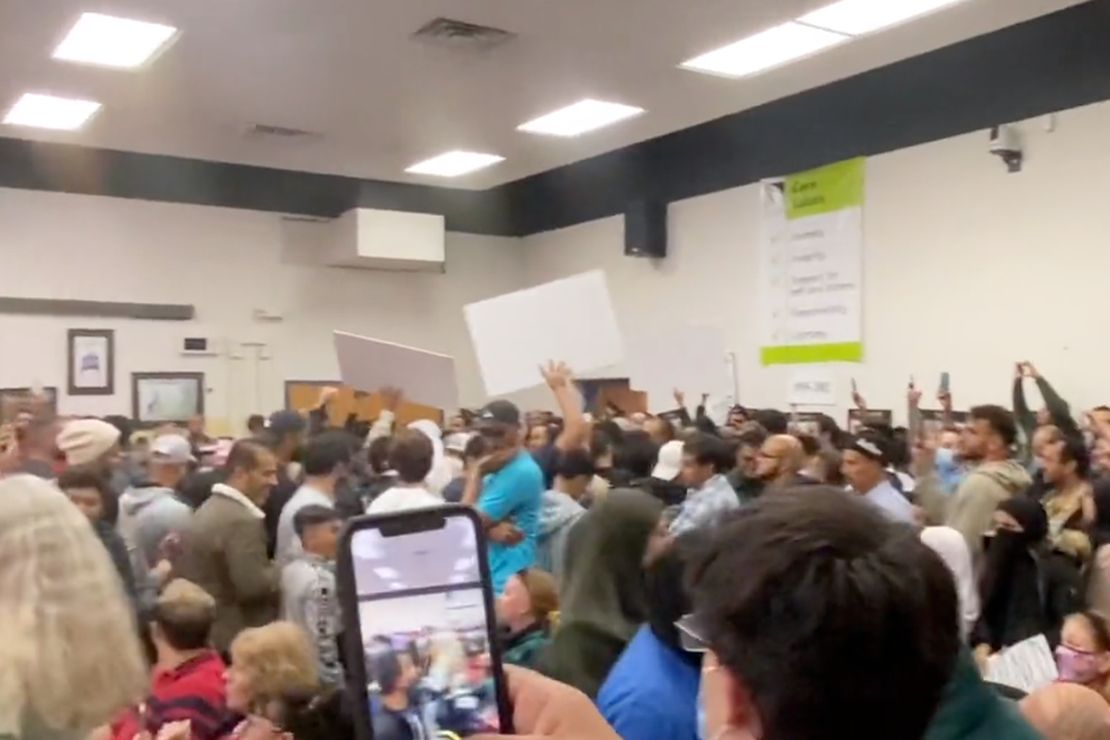 You cannot search them to get on a plane—that’s racial profiling and unscientific! You cannot restrict Visas from Muslim countries—that’s cruel racism! You cannot question the hijabs in the land of the free—that’s religious oppression! You can’t even serve ham and bacon to non-Muslim kids in schools where Muslim kids are—that’s insensitive and intolerant.

It’s not hard to see the conundrum the Michigan press (and the national press) is going to have with this story. How do they champion the oppressed and saintly gay/trans/non-binary/queerfolk when their main opponent is an even more revered victim group on the oppression hierarchy? I do not envy their position.

Recall how, in the spring, the National School Board Association sent a letter to the Department of Justice asking to classify parents—upset with groomer school boards stocking the school libraries full of porn—as terrorists. Then the DOJ issued a fatwa promising to harass those parents with the FBI.

But now, the DOJ and the NSBA are going to have to come up with a new slur, aren’t they? They wouldn’t dare call hundreds of concerned Muslims “terrorists,” would they? The mere thought of it makes me break out into hysterical laughter. I. Can’t. Breathe.

But all of this has been making me seriously consider which group I would prefer. Currently, we are living under the Rainbow tyranny. The cult is so strong that every company is forced to fly their flag, change logos to conform, and add pronouns to email signatures. Every elementary school is teaching kids they could have been born in the wrong bodies while training kindergartners how to color each flag on the rainbow spectrum for every sexuality under the sun, including autosexuality (and if you don’t know what that is, just see everyone in the Kardashian family).

Worse, the gender-cult groomers are trying to enshrine in the constitution of Michigan, with Proposition 3, that there is no such thing as the age of consent and every child has a right to abortion or to sterilize themselves through experimental “trans-affirming health care,” including puberty blockers and genital-destroying surgeries.

This is not the world I want to live in.

On the other hand, I watched the rescheduled live Dearborn School Board meeting Thursday night with my Rumble family, and I got a good look at the Muslim community in Michigan. They seem like intelligent, well-educated, family-oriented, red-pilled warriors to me. (And single ladies, Dearborn has more than its fair share of testosterone-filled, good-looking marriageable-aged men. If you’re getting sick of soy boys, head to Dearborn.) I never saw so many men stand up at a school board meeting and bring the righteous fire down on these groomers’ heads. It was glorious.

It made me seriously reconsider some of my concerns about Islam. While it is still not a religion I would voluntarily join, if the choice were between the woke debauchery that is taking over and what I saw in Dearborn—serious, religious, professional, protective men who aren’t afraid of being men—I much prefer them. Also, this Americanized version of Islam doesn’t seem as strict or as terrifying as what we’ve seen in Iran or Afghanistan. They just seem normal like us: people who want to live their lives and be left alone.

.@RashidaTlaib got CALLED OUT in her own community tonight. Giant #REDPILL moment for the Muslim community in #Dearborn. #RedWave #StopGroomingKids #TheSquad pic.twitter.com/Wz9P0fRTef

During the stream, while I was watching the meeting and chatting with the audience, more than a few people made comments like, “I’d wear a hijab if it meant we never had to see these books again.” People are longing for someone to take the reins and pull the horses to an abrupt halt. Christians, while they mean well, don’t seem to have the male strength out front that is needed. Instead, we have moms. And moms are great. It was a mom who started this fire in Dearborn. Stephanie Butler is the one who blew the whistle, and she is facing serious heat, like doxing and internet mobs coming after her job.

RELATED: Michigan Proposition 3 Could Usher in Sex-Change and Abortion Tourism for Minors

But if it were just Butler and other moms like her, this story wouldn’t have the legs it now has, with hundreds of angry Muslim fathers behind her. It was something to see. There’s nothing quite like the righteous anger of dads. I have begged for years for dads to come out and lead the fight. That’s when the tides will turn. We need men to lead us back to sanity, but for whatever reason, we never get more than a handful of dads in a sea of moms.

But not in Dearborn. Some moms spoke, but mostly, it was dads and brothers and sons. It was the most wonderful display of patriarchal power I ever saw, and it made me feel hopeful for the first time in a long time that the reign of terror by the Rainbow cult is coming to an end.

One man laid it out so brilliantly that I had to listen to it three times. I can detect no lies here.

At the core of this issue is an ideological battle and it seems like… some members of this board have been inclined toward an insane liberal LGBT ideology… but none so deranged than the idea that pornography is good and kids should have access to pornography in school as part of education. Incest, pedophilia, zoophilia… is illegal and should never have been on our shelves to start.

This is not about ‘our libraries serving as a ‘gateway to knowlege’… this is about where we draw the line and the moral corruption that the majority of us in Dearborn proudly don’t accept. This is about the deliberate targeting of students with certain toxic, indecent content of an insane ideology that students must not be around. The reality is the proponents of LGBT liberal ideology… are fine with democracy as long as people vote for their fanatical views and as long as it supports their wicked agendas. But if they vote against their views, the liberal authority blocks the democratic process and imposes the LGBT liberal positions on the populous. They are Hitler. They are the oppressors. They are radical extremists.

These are good people. I’m happy to stand with them to protect our kids and our society from the disgusting raunch being thrust upon them by psychopathic narcissists. We are not extremists or terrorists. The groomers in the LGBTQ+ cult are.