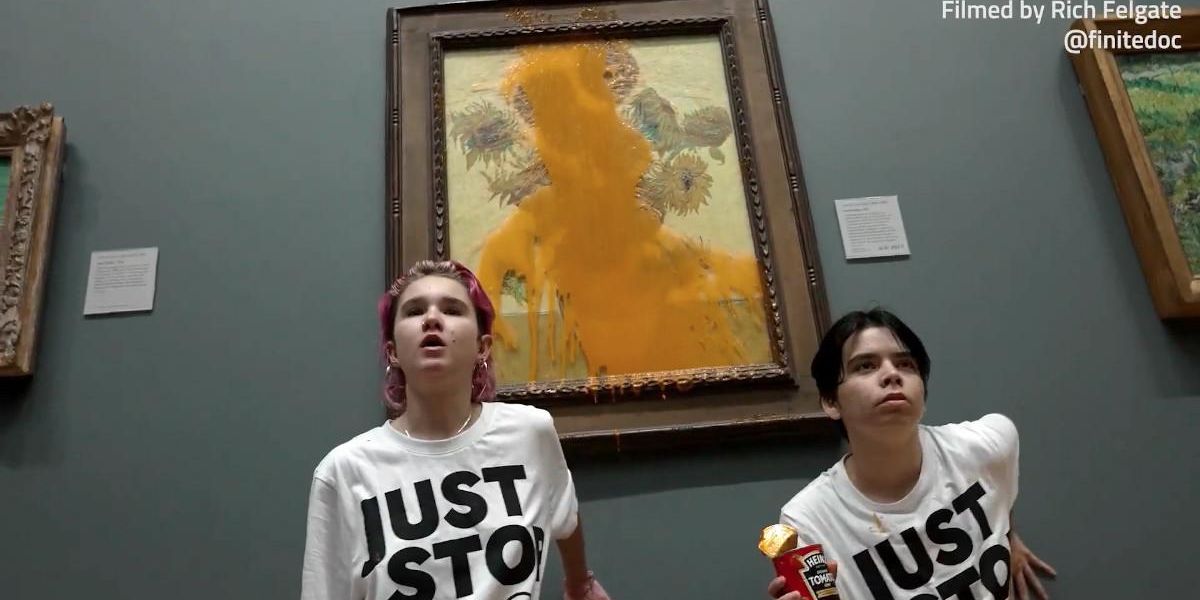 Two climate activists were arrested Friday after throwing tomato soup at a famous Vincent van Gogh painting and gluing themselves to the wall at the National Gallery in London.

The female protesters belong to a group called Just Stop Oil, a coalition of climate alarmists demanding that the U.K. government halt all new oil and gas projects. They entered room 43 in the National Gallery, in which van Gogh’s “Sunflowers” is displayed, at approximately 11 a.m. local time and threw the contents of two cans of Heinz tomato soup over the painting.

“What is worth more, art or life? Is it worth more than food? Worth more than justice? Are you more concerned about the protection of a painting or the protection of our planet and people? The cost of living crisis is part of the cost of oil crisis. Fuel is unaffordable to millions of cold, hungry families. They can’t even afford to heat a tin of soup,” one of the activists said, according to video of the protest filmed by Just Stop Oil activists.

London Metropolitan Police said the protesters were arrested for criminal damage and aggravated trespass. Specialist officers were sent to the scene to unglue them, and they were taken into custody to a central London police station.

There was some minor damage to the frame, but the $80 million painting was unharmed, police said.

Van Gogh paintings that are displayed in museums are kept behind protective glass to shield them from light, touching, or vandalism.

Just Stop Oil said that the National Gallery protest followed “two weeks of continued civil resistance” by the group “in response to the government’s inaction on both the cost of living crisis and the climate crisis.”

The government had paused the issuance of new licenses in 2020 for a “climate compatibility check,” but Conservative Prime Minister Liz Truss recently announced the process would resume.

“This is not a one day event. This is an act of resistance against a criminal government and their genocidal death project,” Just Stop Oil said. “Our supporters will be returning – today, tomorrow and the next day – and the next day after that – and every day until our demand is met: no new oil and gas in the U.K.”

The group in recent weeks has disrupted traffic at various locations in London, infuriating drivers. Videos from an Oct. 9 protest show frustrated motorists exiting their vehicles and dragging the protesters off the street to clear the roads.

“I have to go to hospital for an appointment, I’m deaf, let me get on with my life and stop interfering with us,” one man says in the video.

u201cDAY 9: We are not backing down.nnToday, the Occupation of Westminster enters its 9th day. Massive disruption has been caused throughout the borough with multiple bridges and key A roads repeatedly blocked.nn#CivilResistance #A22Network #JustStopOil #NoNewOil #EnoughlsEnoughu201d

Truss’ government has also lifted a 2019 ban on hydraulic fracking in response to the energy crisis affecting all of Europe due partly to the ongoing war between Russia and Ukraine. Conservative members of Parliament have called for increases in domestic energy production, including use of fossil fuels, to reduce reliance on natural gas exports from Russia.