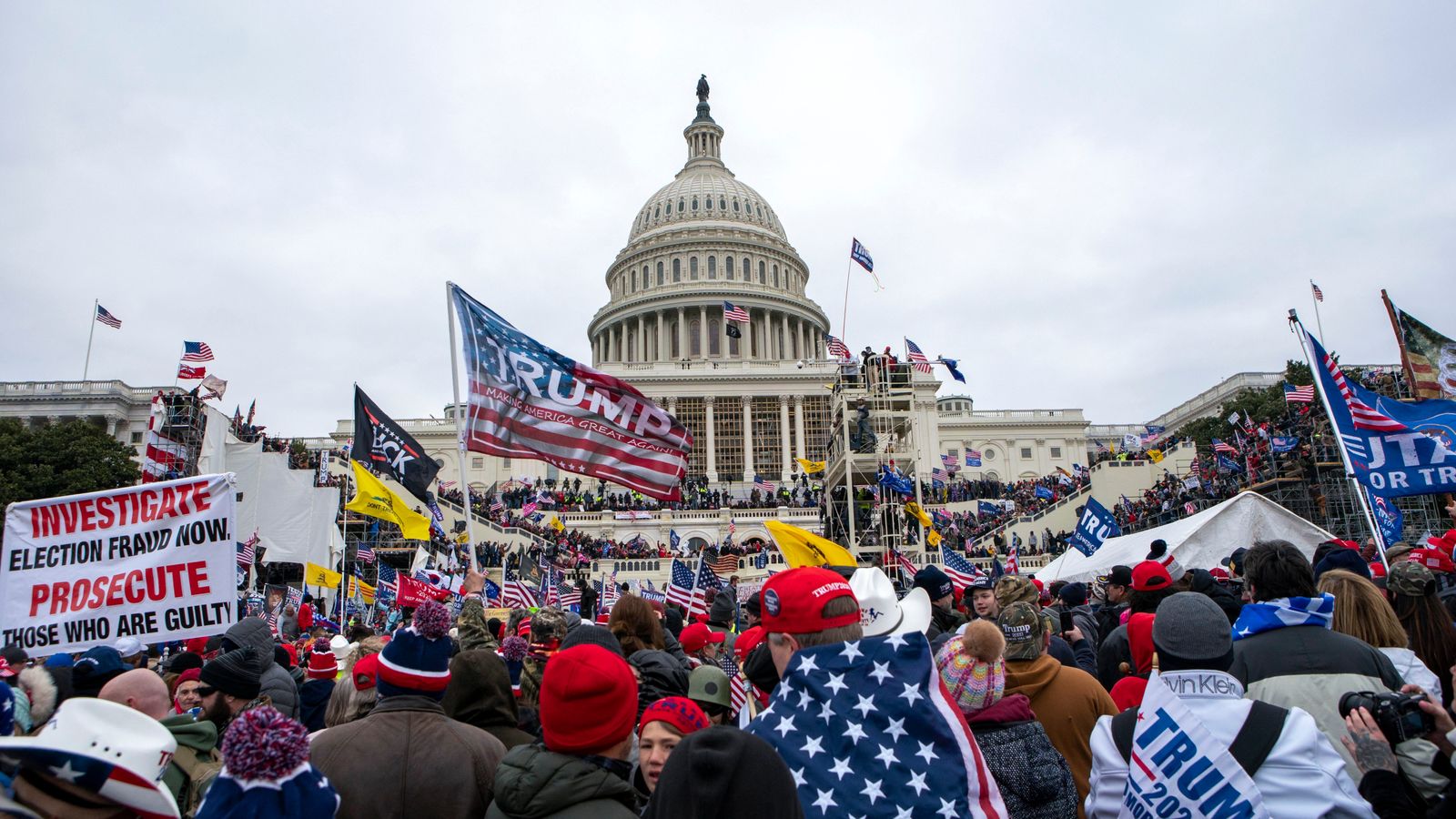 A police officer on duty during the US Capitol riots has described it as a “medieval battle scene” in which he was beaten and tasered before suffering a heart attack.

Michael Fanone told Sky News he thought he would die after becoming detached from his colleagues and being “struck from every direction” during the riots on 6 January 2021.

The former officer says the committee hearings investigating the riots are important in terms of getting to the root cause of the violence and establishing whether there was co-ordination by former president Donald Trump.

The committee has collected a staggering trove of material relating to the riots, including transcripts of more than 1,000 interviews and millions of other documents. The last hearing will take place today and the final report is expected in December.

Recalling the events of the day of the riots, Mr Fanone says he headed for the Capitol building with his partner, Jimmy Albright, after hearing distress calls from police officers already at the scene.

He told Sky News: “We made our way to the lower west terrace, the area where the president-elect walks out of the Capitol on to the inaugural stage to take the oath of office.

“The pinnacle of the fighting that day was at that location, where about 40 or 50 DC police officers and several US Capitol police officers were trying to prevent thousands of angry insurrectionists from entering the Capitol complex.

“It was only about as wide as maybe four or five officers standing abreast, probably about 200-250 feet long, and these officers were fighting for their lives.

Storming the Capitol: How four hours of mayhem unfolded in Washington

“When I got there, (police officers) had been fighting for about 90 minutes. I saw my colleagues were fatigued and injured and I felt like, since I had just got there, I was still fresh and I was going to make my way to the front.

“We had chemical agitants being used against us, CS gas, bear spray, as well as a number of different types of weapons – everything from aluminium baseball bats, metal poles, scaffolding, riot shields and other police weapons that had been taken from officers. There were also firearms present.

“There was a lot of screaming and yelling. It was really just body against body, officers pressing against the rioters trying to push them, or force them, back out of the tunnel entrance.

“If you imagine a rugby scrum – it was officers standing shoulder to shoulder, these rioters were pressing up against us, it was like a medieval battle scene. You could not slide a credit card between two people.

“The only equipment I had with me, other than my duty belt, my service weapon, was a helmet and a riot shield that covers your face.

“I was pulled away from the police line to the crowd, where I was beaten and struck with a Taser device at the base of my skull. That’s excruciatingly painful, especially when it’s done repeatedly in short succession. As a result, I suffered a heart attack and traumatic brain injury.”

Mr Fanone continued: “Once I was out in the crowd, I remember being struck from every direction with fists and metal objects. I do remember, at one point, yelling out that I had kids, trying to appeal to the humanity of some of the individuals in the crowd, and at that time I was being shot with a Taser device.

“The only thing I was thinking about was how to survive the situation. I thought about using deadly force (weapon) but I quickly came to the conclusion that would most likely not result in my survival. There were thousands of rioters and there’s specific police protocol that dictates how we can use deadly force.

“While I may have been authorised to use deadly force against some of those individuals, there was a likelihood that some people would be injured, and possibly killed, who I did not intend to use force against. I was also concerned about having my gun stripped away from me.

“I opted to try to appeal to peoples’ humanity, use some psychological warfare, and said ‘I have kids’. Some of the rioters did offer me assistance.

“There were other rioters that were fighting with them over the ability to get to me, to continue to assault me, so it was a strange dynamic for a few minutes until I was able to be rescued by my colleagues.”

Mr Fanone, 42, says he thought his life was in danger as soon as he saw the situation that had developed at the Capitol.

The former police officer, now a law enforcement analyst, has given his testimony to the House committee set up to investigate the attack on the Capitol.

Ahead of its final hearing, Mr Fanone – who has written a book entitled “Hold the Line”, said: “The hearings are important because we need an investigation, not just into the criminality committed, but it’s important to get to the root causes of January 6th.

“Was there any co-ordination with elected members of our government, with members of the Trump administration or with the former president himself?

“I don’t know if you can change everyone’s hearts and minds about the reality of that day and who was responsible for it, but what you can do is ensure that people who broke the law are punished accordingly.

“That’s why our Republic is based on the rule of law – it’s the great equaliser.”

Movie theater stocks pop after report says Amazon plans to spend $1 billion on releases
Disney is counting on Bob Iger to make hard decisions about its streaming and TV assets — or find someone who will
‘The People Have Spoken’: Musk Announces Mass ‘Amnesty’ For Most Banned Accounts After Poll
Here We Go: WHO to Rename ‘Monkeypox’ Virus to ‘MPOX’ as Pressure Mounts from the Biden Regime
Black Friday online sales to hit new record, expected to top $9 billion