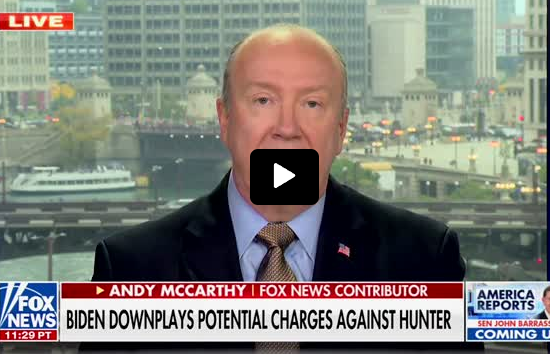 “[President Joe Biden] should be worried, I think, obviously should be worried about his son who has had a very troubled past, but in terms of the investigation, I think the talk that we are hearing now about the possibility of a disposition of the case with tax charges and maybe the full statement that you refer to, could be a choreographed event, what is swept under the rug is the thing that is of consequence to the country, which is the fact that foreign regimes…such as China, poured millions of dollars, millions into the coffers of the Biden family,” Andrew McCarthy, a former federal prosecutor, said.

Federal agents reportedly believe there is sufficient evidence to indict Hunter Biden on tax charges and on violations of federal firearms laws. Some Republicans have questioned whether the business dealings have compromised President Biden, who allegedly met Hunter Biden’s business partners multiple times.

“I really think we make a mistake as we talk about the Hunter Biden investigation, which is just a diversion from the fact that what is interesting and of importance to the American people is not what Hunter gingerly calls his tax matter, but the fact that these regimes paid millions and millions of dollars into the Biden family and the fact that the president himself is implicated in at least one of those transactions,” McCarthy said.

President Biden denied in 2020 that Hunter Biden did anything unethical in his business dealings with China.

“I expect that will happen here and indeed, I think what’s going to happen here, we better have coverage on Christmas Eve because it will be, you know, one of these events where they quietly bring him into court and you know, he pleads guilty to trivial counts and they hope that the rest of the investigation goes away,” McCarthy predicted. “I think if the Republicans retake at least one house of the Congress, it’s not going to go away because I would expect they are going aggressively investigate the thing that’s of interest in this case, which is not Hunter Biden’s tax matter and not the mishandling of the gun and the false statement that he filed in connection with that, that’s small potatoes. What matters here is the foreign money that went into the Biden family coffers.”

The White House did not immediately respond to a request for comment from the Daily Caller News Foundation.

HERE WE GO: Los Angeles Mask Mandate Set to Return as Covid Cases Rise
MSNBC’s Joy Reid Lashes Out At GOP, Lies About Holocaust Book Bans
WashPost Arrives on Twitter Files on Hunter Biden: Not Even Close to a ‘Bombshell’!
Why This Graphic Designer Can’t Be Forced to Endorse Same-Sex Marriage
Philadelphia Wawa Robbed by Man Armed With a Needle (VIDEO)