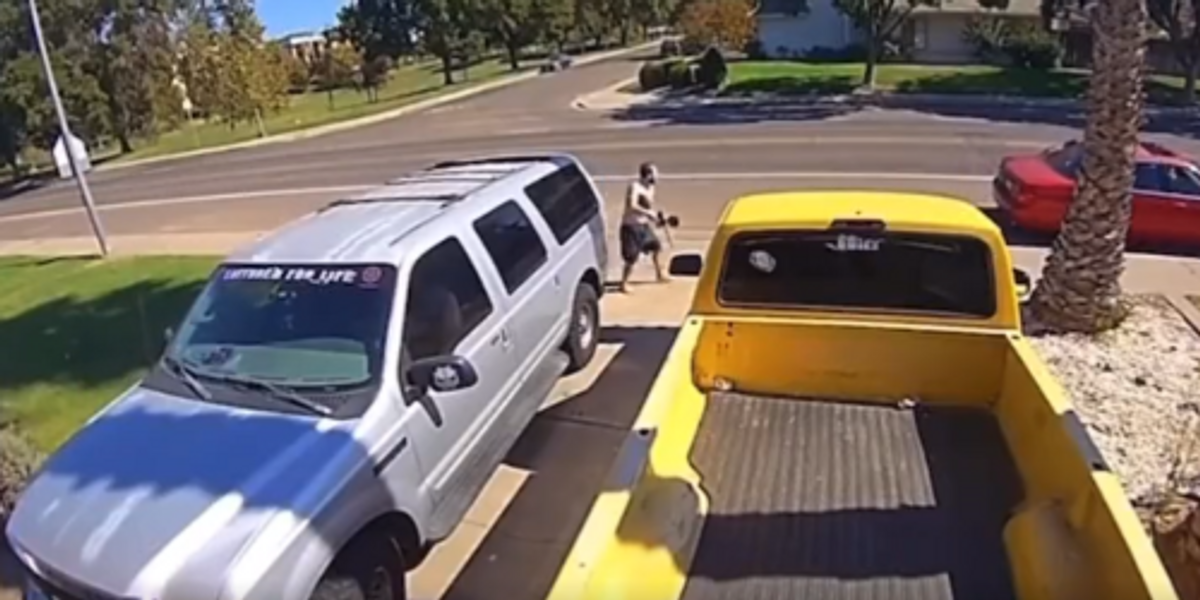 In broad daylight, two men attempted to steal catalytic converters from two trucks parked in the driveway of a home in Turlock, California. Around 12:30 p.m. on Oct. 4, two men tried to steal the catalytic converter from a 2000 Ford Excursion, according to Turlock Police Department spokesperson Sgt. Mike Parmley.

A car alarm sounded momentarily, but the men go back underneath the vehicle after the noise stops.

Family members caught wind of the attempted theft and thwarted the thieves by unleashing a paintball barrage.

The suspected thieves scurried from the driveway as they are pelted with paintballs.

Two shirtless and shoeless men hunt down the suspected thieves with their paintball guns. The alleged catalytic converter thieves fled to a red car that was driven by a third suspect.

“A frustrated resident of the home is captured on home surveillance shooting the two male suspects, multiple times, with a paintball gun,” Parmley told KXTV.

The family told the Turlock Police Department that this was the seventh time that catalytic converters were attempted to be stolen from their vehicles. Three of the attempts have caused damage to their cars.

Unlike law enforcement in Florida which encourages residents to defend their property, the police in California advise against it.

“Despite having the right to defend your own property, these types of actions could be very unsafe. Upon confronting individuals committing crimes, their actions are often unpredictable and could lead to intervening citizens becoming victims of an assault or more serious crime,” Parmley said.

Anyone with information on the suspects are encouraged to contact Turlock Police Department officer Greg Roton at (209) 668-6536.

Catalytic converters contain precious metals that can be hawked for significant money.

Since 2019 through the first three months of 2022, the top five vehicles targeted for catalytic converter theft are: