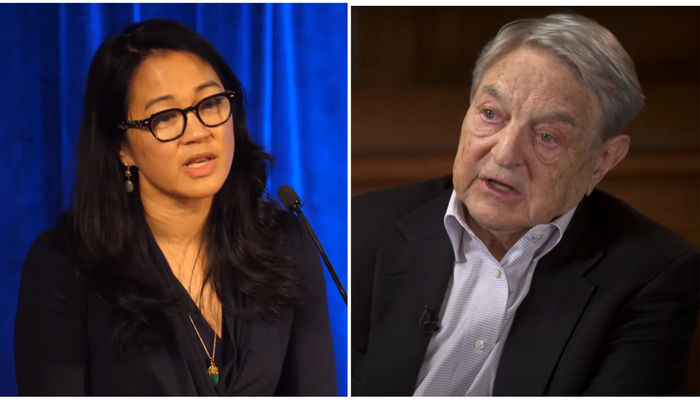 An executive at a group funded by liberal billionaire George Soros is a radical leftist who has supported defunding the police. She has since been tapped to become vice chair of the Biden Treasury Department’s brand-new racial equity committee. Treasury Secretary Janet Yellen announced that Roosevelt Institute President and CEO Felicia Wong will serve as vice-chair of the woke “Treasury Advisory Committee on Racial Equity” in an Oct. 4 press release, making Wong just the latest Soros-tied addition to the Biden regime. Wong is a leftist activist who lists her preferred pronouns as “she/her” on her official bio. Soros not only funded Wong’s Roosevelt Institute with $4,692,500 from 2016 to 2020, but Wong also previously worked for a massive Soros-funded network of progressive donors.

Wong advocated for defunding the police in a 2016 report headlined “Rewrite the Racial Rules: Building an Inclusive American Economy.” The report stated, “Police budgets should be reduced and for-profit prison systems must be done away with.” [Emphasis added].

Like many progressives, Wong seems to view the world through a racially-charged lens. She claimed that “all policy, from vaccine distribution to higher education funding to tax reform, will have racialized effects” in a 2021 report headlined: “A New Paradigm for Justice and Democracy.”

Treasury’s press statement on its racial equity committee also revealed that the 25 members of the commission “will identify, monitor, and review aspects of the domestic economy that have directly and indirectly resulted in unfavorable conditions for communities of color.”

Wong is not the only Soros-tied leftist staffing the Biden administration. MRC Business and MRC Free Speech America broke news in May that the former co-chair of President Joe Biden’s Disinformation Governance Board (DGB), Department of Homeland Security Principal Deputy General Counsel Jennifer Daskal, had at least three connections to Soros.

The Biden administration shut down the DGB after just three weeks following intense criticism of the Orwellian effort and then-DGB Executive Director Nina Jankowicz, the self-proclaimed “Mary Poppins of disinformation” whom Biden’s DHS tapped to lead the dystopian board.

The Roosevelt Institute celebrated the news of Wong’s appointment on Twitter: “We support the @USTreasury’s establishment of the Advisory Committee on Racial Equity as a demonstration of its commitment to a fair and equitable economy, and are excited to have our President & CEO @FeliciaWongRI join its inaugural membership as vice chair.”

We support the @USTreasury’s establishment of the Advisory Committee on Racial Equity as a demonstration of its commitment to a fair and equitable economy, and are excited to have our President & CEO @FeliciaWongRI join its inaugural membership as vice chair 🎉 https://t.co/rhCtspHrXL

The Roosevelt Institute did not respond to a request for comment from MRC Business by publication time.