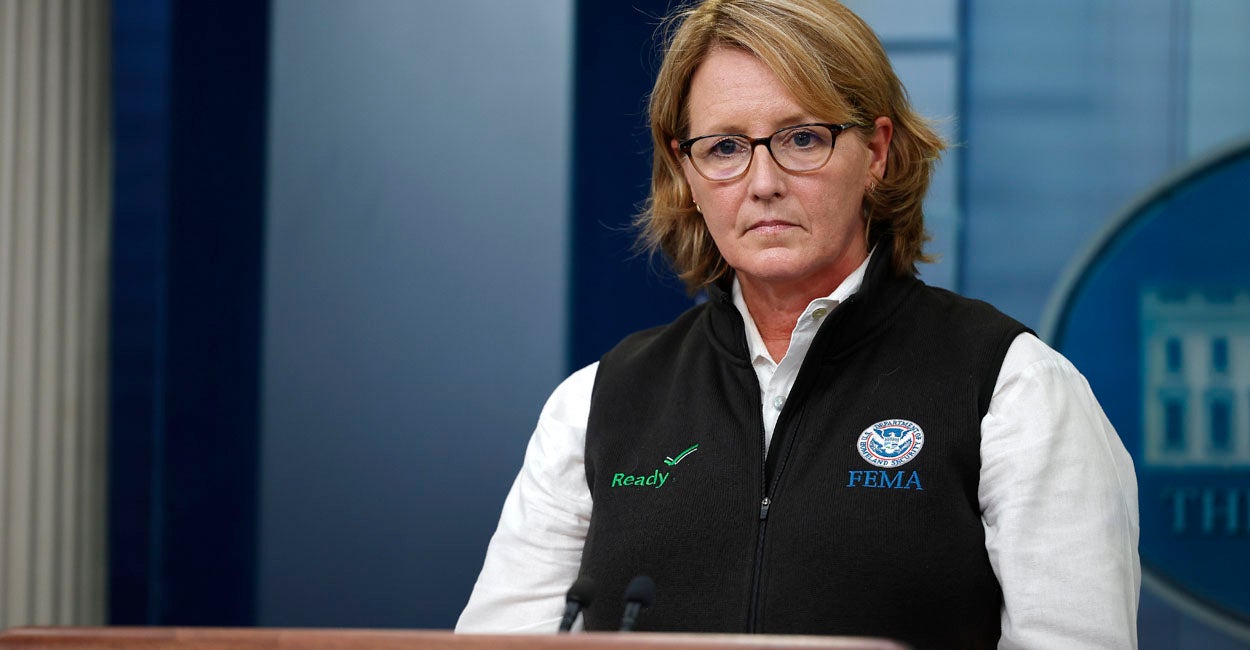 Politico this week inaccurately reported remarks by FEMA Administrator Deanne Criswell about Florida’s response to Hurricane Ian, but she also appeared to be inaccurate in saying that she hasn’t ever acted politically during a natural disaster.

Criswell, who runs the Federal Emergency Management Agency under the Biden administration, spoke Tuesday at a White House press briefing about the hurricane that was about to thrash Florida.

Politico later changed some wording in its story that day, but only after the inaccuracy was cited during a Florida press conference as a way to criticize the response to Hurricane Ian by Florida Gov. Ron DeSantis, a Republican who has been critical of President Joe Biden, a Democrat.

Criswell acknowledged concerns about a lax response to storm warning from Floridians who have never experienced a hurricane in the state and those who have previously experienced a ‘near-miss.’

But Criswell actually didn’t say anything during the White House press briefing about a “lax response,” according to televised and transcribed remarks in which the FEMA administrator said:

I do have concerns about complacency. We’re talking about impacts in a part of Florida that hasn’t seen a major direct impact in nearly 100 years. There’s also parts of Florida where there’s a lot of new residents that have never experienced this type of threat. …

Heeding the advice of your local officials is the most important. And as far as the conversation, the president directed me to contact the governor [DeSantis] early on, before we even did the declaration; I did that.

My regional administrator is with the governor right now, making sure that we’re understanding what the needs are. And our focus is on the current life safety needs that need to be met.

Later, Criswell was asked about “anything unusual or any challenges” in contacting local officials.

“The communication that we have had with state officials has been excellent,” she replied.

Politico’s reporting was so egregious that DeSantis responded to the news outlet’s article during his own press conference in Florida.

A reporter asked about the FEMA administrator’s concern about the “lax response to the storm,” which Politico had attributed incorrectly to Criswell.

DeSantis shot back: “That is nonsense.”

“Stop politicizing it. Stop it. We declared a state of emergency when this thing wasn’t even formed,” DeSantis told the reporter, adding:

You’ve had counties that have done a lot of hard work. You are trying to attack me, I get it, but you are attacking these other people who work very hard. So that is just totally false. I don’t think we have ever—certainly since I’ve been governor—declared a state of emergency this early.

A follow-up tweet by DeSantis War Room showed how Politico had changed the wording of its story. It said, “nice stealth editing guys.”

Criswell acknowledged concerns about a lax response to storm warnings from Floridians who have never experienced a hurricane in the state and to those who have previously experienced a ‘near miss.’

Editors at Politico changed this wording to:

Still, Criswell acknowledged concerns about Floridians not heading warnings, especially those who never experienced a hurricane in the state, and those who have previously experienced a ‘near miss.’

Before being named FEMA administrator by Biden, Criswell was commissioner of New York City’s Emergency Management Office for less than two years under Mayor Bill de Blasio, a Democrat. An Air Force veteran, she previously worked at FEMA during the Obama administration.

During the same White House press briefing, Criswell told reporters: “We do not bring politics into our ability to respond to these disasters.”

However, the FEMA administrator and DeSantis did not see eye-to-eye earlier this year, when Criswell denied assistance to senior citizens who survived tornadoes, as reported by The Center Square.

On Jan. 16, tornadoes hit Florida’s Charlotte and Lee counties, destroying or severely damaging 158 homes. Most of the residents affected were senior citizens.

“DeSantis issued an executive order declaring a state of emergency for both counties and requested a major disaster declaration from the Biden administration. Florida offered aid through its Individual Assistance program and requested assistance from FEMA,” Center Square reported. “But FEMA denied Florida’s request.”

In a letter to DeSantis, Criswell wrote that “the damage from this event was not of such severity and magnitude as to be beyond the capabilities of the state, affected local governments, and voluntary agencies.”

“Accordingly,” the FEMA administrator wrote, “we have determined that supplemental federal assistance is not necessary.”

Returning to Pre-Trump ‘Dead Consensus’ GOP Would Be Big Mistake
One dead, others injured after ‘rogue wave’ strikes Viking Polaris ship
Man thrown over the side of a bridge after Chargers game in wild incident caught on video says his attacker has still not been arrested by police
‘We are tired of this nonsense’: Gas station owner tired of violent crime plaguing Philadelphia hires armored, heavily-armed guards
Whoopi/Sunny: Christians Must Bake the Cake, Only We Get to Deny Service