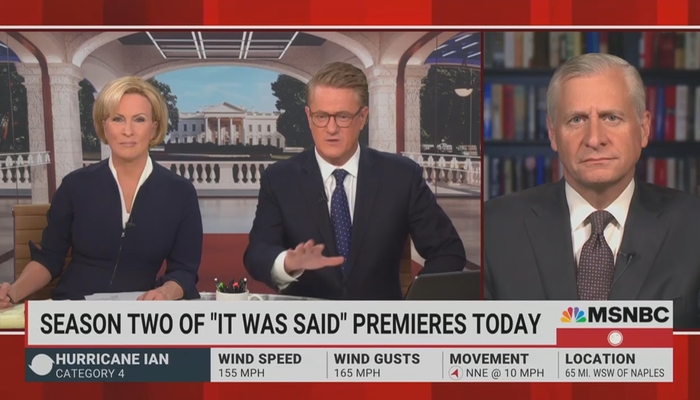 As soon as Morning Joe brought on Jon Meacham to talk about Winston Churchill’s speech rallying the British people during the darkest days of WWII, you knew that Joe Scarborough would try to tie it to former President Trump and the alleged threat to democracy, etc.

And sure enough, after the clip of Churchill’s “finest hour” speech was played, Scarborough said:

“In the dark days of American democracy, four, five years ago, sometimes at night, with the lights off, I would put Churchill’s speeches on, and just close my eyes and listen.”

We can neither confirm nor debunk Scarborough’s claim. But when we imagine Scarborough sitting in the dark, somehow we see him grooving to the Grateful Dead’s greatest hits, with all that entails.

Note: Scarborough introduced Meacham only as a “presidential historian,” thereby failing to disclose that Meacham is a Biden adviser and speechwriter.

In a segment devoted to speechmaking, Scarborough’s omission was particularly egregious. For there can be no greater contrast in oratory than that between Churchill’s stirring words, and Biden’s rumbling, bumbling, stumbling emissions.

On Morning Joe, Joe Scarborough claiming that during the dark days of Donald Trump, he would sit at night with the lights off and listen to the WWII speeches of Winston Churchill was sponsored in part by Abbott, maker of Skyrizi, Liberty Mutual, Flex Seal, United Health Care, and Subway.

JOE SCARBOROUGH: Right now, let’s bring in presidential historian Jon Meacham. Jon, it’s great to have you here. You’re out today with a new episode of your award-winning podcast series, “It Was Said.”

My favorite podcast that’s out there, and in the season-two premier, you talk about Winston Churchill’s powerful, the “finest hour” speech, delivered in June of 1940, one month after the premiership,  he rose to the premiership at a time very few in America or across the world gave Great Britain a chance of pushing back and stopping a Nazi invasion of the island. Here’s a little bit of that speech.

WINSTON CHURCHILL: If we fail, then the whole world, including the United States, including all that we have known and cared for, will sink into the abyss of a new dark age, made more sinister and perhaps more protracted by the lights of perverted science.

Let us, therefore, brace ourselves to our duty. So bear ourselves, that if the British Empire and its Commonwealth last for 1,000 years, men will still say, this was their finest hour.

SCARBOROUGH: Just an absolutely remarkable speech, Jon. You know, first of all, since this podcast series is about speeches, let’s talk about Churchill for one second. As an orator, I, let’s just say in the dark days of American democracy, four, five years ago, sometimes at night, with the lights off, I would put Churchill’s speeches on and just close my eyes and listen.