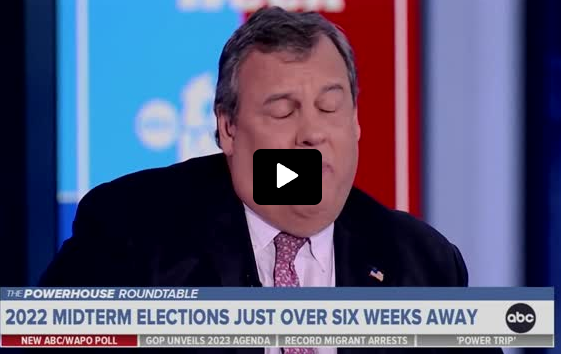 An ABC News/Washington Post poll released Sunday showed a job approval rating of 39% for Biden, while 53% disapproved. Furthermore, only 36% of respondents approved of Biden’s handling of the economy, while 57% disapproved and 74% of those polled characterized the economy as “bad.”

“That’s all bad news for the Democrats in that poll, and I’ll tell you, I was talking to a family farmer this week, just to put what we have to look forward to,” Christie said on ABC News’ “Powerhouse Roundtable.” “He said since Biden entered office, his diesel fuel costs are up 222% on his farm, and his nitrogen costs are up 262%.”

“That’s not only bad for them and their ability to make money, but worse, it’s going to hit us in supermarkets all over this country,” he added. “This is hardly over, and that’s what these numbers are telling. People are feeling that, and they are going to vote that way, and that’s not good for the Democrats.”

The poll also showed that Republicans had double-digit leads over Democrats on being trusted to handle the economy, inflation and crime.

Christie also added that while abortion may be a motivating factor for voters heading to the polls, the economy will most likely be the predominate issue in November.

“Let’s talk about the abortion issue because 84% of the voters say the economy is their top issue,” Christie said. “Only 62% say abortion, and when you go deeper into the poll and look at some of the cross-tabs on this, what our poll is showing is that the pro-life people are more motivated by the abortion issue to vote in these midterms than the pro-choice people are.”

The Supreme Court upheld a Mississippi law restricting abortions after the 15th week of pregnancy in June in a 6-3 ruling, overturning Roe v. Wade.

The ABC News/Washington Post poll was conducted between Sept. 18-21 among 1,006 U.S. adults. It had a 3.5 percentage point margin of error.