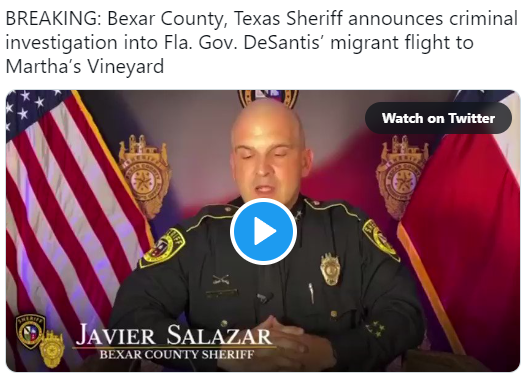 Bexar County Sheriff Javier Salazar said that an illegal Venezuelan migrant allegedly was paid to “recruit” the others to board the planes “under false pretenses.” Salazar explained that he was in touch with attorney Rachel Self of Boston, adding that his office hadn’t interviewed her clients yet.

“The allegations that we’ve heard, it’s absolutely distasteful, it’s disgusting. It’s an abuse of human rights. But, I would like to find out sooner rather than later what charges if any are going to apply and to whom,” Salazar said.

“I believe there’s some criminal activity involved, but at present, we’re trying to keep an open mind and we’re going to investigate to find out, to determine what laws were broken, if that does turn out to be the case,” Salazar added.

DeSantis sent two flights of illegal migrants from Texas to the island on Wednesday. The incident sparked accusations that the illegal migrants were forced to take the transports and were misled about where they were going and what opportunities, that included jobs, they’d get upon arrival.

Some of the passengers told media outlets they weren’t told the flights were bound for Martha’s Vineyard.

“Immigrants have been more than willing to leave Bexar County after being abandoned, homeless, and ‘left to fend for themselves.’ Florida gave them an opportunity to seek greener pastures in a sanctuary jurisdiction that offered greater resources for them, as we expected,” DeSantis’ Communications Director Taryn Fenske told the Daily Caller News Foundation.

“Unless the MA national guard has abandoned these individuals, they have been provided accommodations, sustenance, clothing and more options to succeed following their unfair enticement into the United States, unlike the 53 immigrants who died in a truck found abandoned in Bexar County this June,” Fenske added, referring to an incident where 53 illegal migrants died in June after being smuggled in a tractor trailer in Texas.