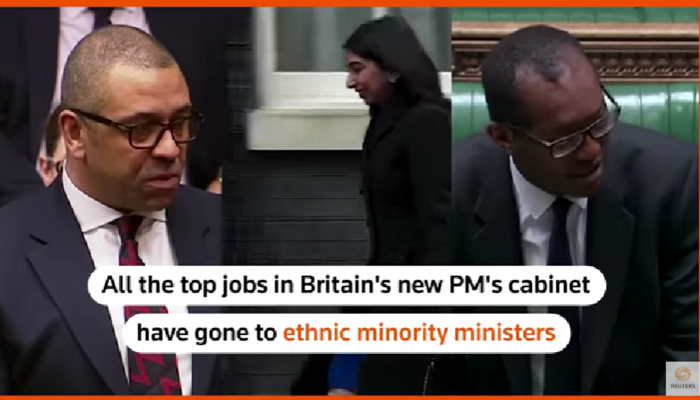 Whether here or abroad, conservatives can’t win. As a new conservative prime minister takes over in England and installed a multi-racial cabinet, the New York Times has abruptly shifted the diversity goalposts. If reporters Stephen Castle and Mark Landler can’t attack conservative parties for being lily-white, they can attack them for being diverse in ethnicity but not ideology: “Truss Forms a Cabinet Diverse in Background but Not in Ideology.”

One attended Britain’s most famous private high-school, Eton College, another is a top-drawer lawyer, and the third holds a senior rank as an Army reservist. The résumés of those handed the three top cabinet posts by Britain’s new prime minister, Liz Truss, are typical of generations of high-achievers in her ruling Conservative Party.

What is different is that none of the three are white.

In choosing her top team, Ms. Truss has created a strikingly diverse cabinet. The country also has its first female deputy prime minister.

All of a sudden, the cherished quota-chasing “diversity” that the Times has spent a decade pushing is now mere window dressing, because the new Prime Minister Truss has dared to appoint actual conservatives to her new cabinet.

Still, Ms. Truss’s inner circle, while progressive in its ethnic makeup, also has a hard ideological edge, which critics say makes it unlikely to pursue policy friendlier to Britain’s minority population, or for refugees arriving on the country’s shores.

Indeed, some argue that the diversity among cabinet ministers gives Ms. Truss the cover to pursue even more radical approaches, such as a plan to send some asylum seekers to Rwanda – a policy now the responsibility of Suella Braverman, the new home secretary, whose father came to Britain from Kenya in 1968.

Just in time, radical diversity is no longer important to the paper that’s spent the last decade insisting upon it in every aspect of life.

Critics point out that, unlike the overwhelming majority of Britons, Mr. Kwarteng, Ms. Braverman and Mr. Cleverly were all educated at private schools (albeit sometimes with financial aid, as in Mr. Kwarteng’s case) — proof that social class, rather than race or gender, is perhaps the more telling dividing line in British politics.

The Times briefly confessed that “For all that, Ms. Truss’s appointments put Britain indisputably ahead of many other European countries in the diversity of its political elite” and also the UK’s Labour Party.

Mr. Cameron rejected the contention that the ethnic and racial diversity masked a lack of class diversity. Among those he named to his cabinet, he noted in the interview, was Sajid Javid, whose Pakistani immigrant father drove a bus.

“The fact that the old fusty Conservative Party is managing to produce people like that says a lot,” he said.

The Times concluded with a generic attack on the Conservative party for being…conservative.

Yet critics note that the greater ethnic and gender diversity has not changed the policies of successive Conservative governments, which have grown increasingly hard-line on immigration and often embraced tax cuts and other economic policies that tend to favor wealthy people.

Professor Andrews, from Birmingham City University, said the Conservatives were practicing a particularly cynical form of identity politics by promoting the diversity among its senior leaders, while also advancing retrograde policies.

NewsBusters Podcast: A Buzzkill for the ‘Festival of Fact-Checking’
NewsBusters Podcast: Liberal Networks Never Sounded Like ‘State TV’?
NYT’s Sad Song: Elton John ‘Prescient’ About Trump Stripping Away LGBT Rights
The Democrats’ Goose Still Looks Cooked in November
What Goes Into Gas Prices at the Pump: Lessons From Across the Oil Supply Chain