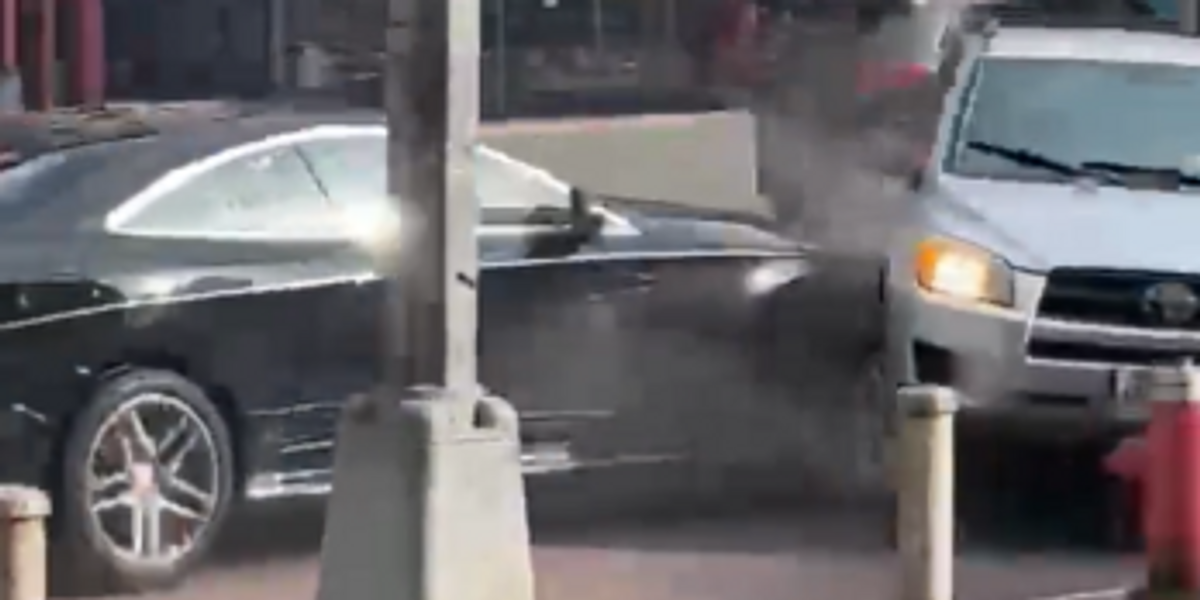 A viral video captured the moment of a crazy car chase in New York City on Saturday afternoon. The car chase escalated into a fender-bending demolition derby on a street on the Upper East Side. The insane situation ends with a gunpoint robbery in broad daylight.

A silver Toyota RAV4 is seen on video speeding away from a black Mercedes Benz around 4:40 p.m. on Saturday. The Mercedes races to the driver’s side of the SUV despite an oncoming car driving down the street.

The Mercedes rams the driver’s side of the RAV4 – which caused the SUV to lose control and slam into another car. The vehicles then burn rubber and continue the car chase down a sidewalk as pedestrians scramble to avoid being run over.

The Mercedes rams the RAV4 yet again – this time on the passenger’s side. The RAV4 spins 180 degrees because of the car crash.

A man gets out of the Mercedes and begins using a gun to smash a window on the SUV.

The gunman then runs to the driver’s side and commits a gunpoint robbery. In the video, the armed man is seen running back to the Mercedes with a black bag. The Mercedes races off and the video ends.

“The guy was in shock he cannot say nothing,” a witness told the New York Daily News. “He just standing in his place. At first when he see the gun… He get out and he put his hands up.”

The New York Daily News reported that the car crash that ended in an armed robbery took place on Second Avenue, only a few blocks from Gracie Mansion – the official residence of the Mayor of New York City Eric Adams.

Police said the RAV4 driver is a 55-year-old man.

The Mercedes was reportedly found on E. 86th St. near Third Ave. A witness said three men fled from a black Mercedes Benz and sprinted to the Second Ave subway station.

Another witness said, “When we were in the store and saw there were guns involved, I told everyone to go to the back of the store. It all happened so quickly – maybe it took three minutes at most.”

According to NYPD crime statistics, robberies are up nearly 40% over the past year in New York City and grand larceny has spiked by 46%.

u201cThis WILD robbery happened in NYC today apparently. Thank you @GovKathyHochul for making sure only the bad guys are armed and feel free to terrorize law abiding citizensnhttps://t.co/nSsYLERqyXu201d

Ford’s stock is up 70% since Jim Farley became CEO – but he still has a ton of work to do
Scarborough: In Dark Days of Trump, I’d Sit At Night and Listen to Churchill Speeches
‘It crushed us’: Florida ravaged by Hurricane Ian – and now it’s set to make landfall again
Remember the Ice Bucket Challenge? It actually accomplished something.
MSNBC Asks: Is It Shocking People Don’t Accept Our ‘Voting Rights’ Narrative?