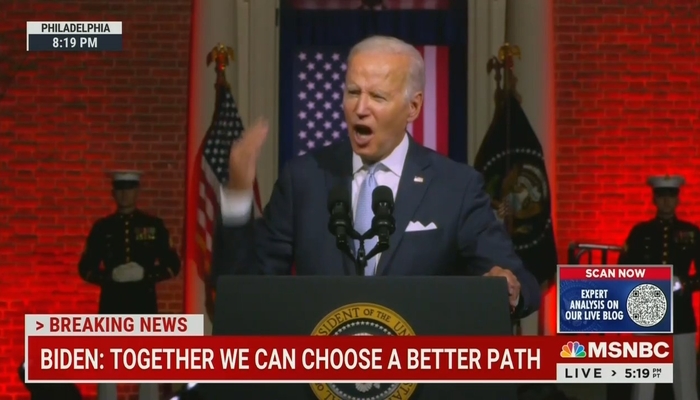 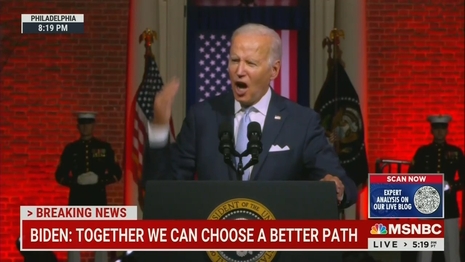 Well that was amusing.

Without the slightest sense of self-awareness, President Biden’s highly political speech in Philadelphia was delivered in front of two US Marines, sending the decidedly ironic message that the U.S. military was quietly behind Biden.

Recall when then-President Trump marched out of the White House to stand in front of the partially burned-in-a-riot St. John’s Episcopal Church across Lafayette Park from the White House —  and was accompanied by the Chairman of the Joint Chiefs of Staff Mark Milley? The media blew a gasket.

Here is a typical media reaction from the day, this one from NBC News:

Nation’s top military officer apologizes for role in Trump photo op outside church: ‘I should not have been there’

“My presence in that moment, and in that environment, created a perception of the military involved in domestic politics,” Milley said.

Now? Media silence —  for the most part. Surprisingly, CNN’s Brianna Keller stepped up to tweet this:

“Whatever you think of this speech, the military is supposed to be apolitical. Positioning Marines in uniform behind President Biden for a political speech flies in the face of that. It’s wrong when Democrats do it. It’s wrong when Republicans do it.”

But speaking of CNN and the Biden speech, perhaps the last word in irony is when CNN’s John Harwood appeared on screen to say this of Biden’s speech:

“The core point he made in that political speech about a threat to democracy is true. That’s something that’s not easy for us, as journalists, to say. We’re brought up to believe there’s two different political parties with different points of view, and we don’t take sides in honest disagreements between them. But that’s not what we’re talking about. These are not honest disagreements. The Republican Party right now is led by a dishonest demagogue.”

Then there was the curiosity of the fact that the broadcast networks —  ABC, CBS and NBC – refused, say again refused, to carry the speech at all. Here is the headline from Deadline: “Broadcast Networks Pass On Carrying Joe Biden’s Primetime Speech — Update.”

The story reported this:

ABC ran Press Your Luck, CBS went with a Young Sheldon rerun and NBC with a Law & Order replay. CNN and MSNBC carried the address, as did news division streaming channels, but Fox News stuck with Tucker Carlson and his critique of the speech as it was happening.

Biden, appearing against the backdrop of Independence Hall, argued that MAGA Republicans were embracing extremism

‘They promote authoritarian leaders and they fan the flames of political violence,’ Biden said.”

Which is to say, the three broadcast networks presumably were wary that were they to carry a serious Biden political  speech pretending to be a serious prime time policy speech? That speech could easily be counted as an in-kind political contribution and the only way to get off that hook would be to offer the same free air…. to Trump. Uh-oh.

But let’s get down to the substance of the CNN and MSNBC reactions.

In a classic example of what psychiatrists call “projection” -defined in the dictionary as “the attribution of one’s own ideas, feelings, or attitudes to other people or to objects.”

To start with Biden himself, there he is in front of the very building where the phrase “We the People of the United States” started the writing of the US Constitution. And knowing that he says this:

“But as I stand here tonight, equality and democracy are under assault. We do ourselves no favor to pretend otherwise.”

As The Daily Wire’s Ben Shapiro has noted — reprinted here in NewsBusters — it is Biden himself who has been conducting a fascist administration. Writes Ben:

“But that smear is particularly galling coming from Biden the same week in which he announced, without any constitutional authority whatsoever, that he was erasing some $500 billion in student loan debts — the single largest executive action in American history. Biden justified that action on the basis of a nonexistent COVID-19 emergency. He has justified similar usurpations on similar grounds: He illegally tasked his Occupational Safety and Health Administration with forcing vaccines on some 80 million people on the basis of a “public health emergency”; he used his Centers for Disease Control and Prevention to try to propagate an eviction moratorium on the same basis; he bragged in July that he will reshape the American economy on his own if Congress doesn’t act in order to forestall a supposed “climate change emergency.”

If we’re talking about semi-fascism, this stuff qualifies.”

So too does the Biden raid on Mar-a-Lago, becoming the first president to use the powers of the FBI to raid the home of a once and possible future political opponent who just happens to be a former President of the United States.

That, without question, has echoes of an out-of-control government.

The question here is what is the media doing to cover all this nonsense?

If “semi-fascism” is now to be the coin of the messaging world from Biden and his party in the two-plus months remaining before the midterm elections?

Then will the media get serious about covering the reality of just which party is seriously about fascism — and which one is in fact standing up for democracy, fair elections, and opposing the use of the government to investigate its political opponents?

Happy Labor Day weekend. Get ready for the midterm season. Buckle up.

Meloni Baloney From the Left
NewsBusters Podcast: ‘Oppressed’ Black Journalist Explains Going Back to Africa
Maher Labels Democrats As ‘The Party Of No Common Sense’
Gavin Newsom signs bill making it easier to punish California doctors who spread COVID ‘misinformation,’ top epidemiologist warns: ‘Chilling interference with the practice of medicine’
Serial killer may be on loose in California after police link spate of shootings