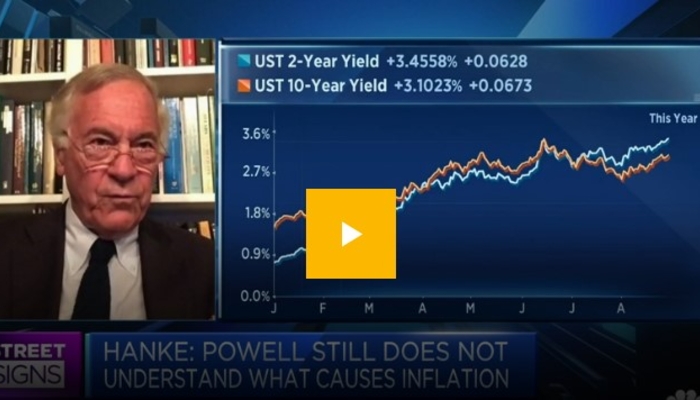 An economist from a leading university said on CNBC Monday that inflation will stay high and “one whopper of a recession” is coming in 2023, despite the liberal media’s attempts to downplay impending economic calamity.

“[S]tarting with COVID in February of 2020, we had an unprecedented growth in the money supply in the United States, and that is why we are having inflation now,” Johns Hopkins University economics professor Steve Hanke said on CNBC’s Street Signs Asia.

Hanke’s words come as the Big Three liberal media networks have been outright denying that a recession just started in the U.S. despite evidence to the contrary, and as CNN helped President Joe Biden’s National Economic Council Director Brian Deese attempt to redefine the meaning of a recession. The U.S. inflation rate remains at a staggering 8.5 percent year-over-year.

Hanke predicted that inflation will stay at about 6-8 percent through the end of this year, dipping slightly to 5 percent at the end of 2023 and going into 2024. The U.S. will reap damages from a recent slowing in the money supply, however, as five months of “zero” growth in the money supply likely means “we’re going to have one whopper of a recession in 2023,” Hanke told Street Signs Asia, as CNBC highlighted in an article Monday.

Hanke went on to criticize Federal Reserve Chairman Jerome Powell for not telling the full story about inflation and what causes it.

“He has failed to tell us that inflation is always caused by excess growth in the money supply, turning the printing presses on,” Hanke said.

Powell is talking about “supply-side glitches” as the root cause of inflation and has stopped saying inflation is “temporary,” “but that’s about all,” Hanke noted.

As recently as June, Powell said recession is a “possibility,” but not likely, as highlighted by NPR:

“There has never been a sustained inflation in world history that’s an inflation of over four percent for about two years … that has not been the result of excess growth in the money supply,” Hanke said.

The U.S. inflation rate perched under 4 percent until April 2021, when it rose from 2.6 percent to 4.2 percent, according to U.S. Inflation Calculator. It steadily rose to 9.1 percent in June before decreasing to 8.5 percent in July.

The U.S. government has approved a total of $4.5 trillion in COVID-19-related spending through the Coronavirus Aid, Relief and Economic Security (“CARES”) Act and the American Rescue Plan since March 2020, according to USASpending.gov. Additionally, President Joe Biden signed into law the monstrous $740 billion “Inflation Reduction Act” on Aug. 16. The U.S. government is spending a combined $5.24 trillion through these three laws.

Conservatives are under attack. Contact NBC News 212-664-6192 and demand they continue to report on Fed Chairman Powell’s obfuscation on the state of the U.S. economy.