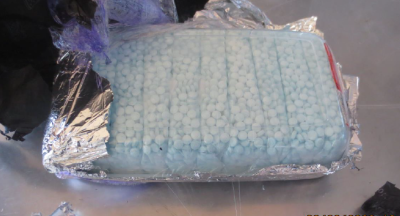 This weekend, Customs and Border Protection officers at the Port of Nogales, Arizona seized about 625,000 fentanyl pills. Approximately 12,000 of them were of the “rainbow” variety.

“Rainbow fentanyl” is designed to kill the young, and it’s now flooding into the U.S.

Fentanyl is increasingly being mixed with dyes to make this type of the deadly synthetic opioid. Michael Humphries, a senior Customs and Border Protection officer in Nogales told the USA edition of El Pais, the Madrid daily newspaper, that the substance “looks like candy.”

The candy look-alike is arriving in large quantities. In addition to this weekend’s seizure, border agents this month found 250,000 pills in a vehicle arriving from Mexico. Agents, a day later, seized 15,000 pills wrapped around the legs of a person crossing into Nogales.

“Deputies are particularly concerned about rainbow fentanyl getting into the hands of young adults or children, who mistake the drug for something else, such as candy or a toy, or those who may be willing to try the drug due to its playful coloring,” reads a statement issued by the Multnomah County Sheriff’s Office in Oregon, after officers there found 800 fentanyl pills and four grams of multi-color powdered fentanyl.

The Sinaloa and Jalisco New Generation cartels in Mexico control the fentanyl trade in border areas. Yet these groups are only distributors. They either buy ready-to-sell fentanyl or mix fentanyl compounds on site. The opioid in either case is designed and synthesized in China by criminal groups.

“Since 2013, China has been the principal source of the fentanyl flooding the U.S. illicit drug market,” reports Vanda Felbab-Brown of the Brookings Institution.

The criminal mastermind is the Communist Party of China. The fentanyl gangs are large and far-flung and cannot operate in the shadows in China.

The regime watches every move of the gangs. It operates a near-total surveillance state, employing the world’s most sophisticated set of social controls. Using big data and artificial intelligence, tens of thousands of government watchers surveil 1.45 billion people with hundreds of millions of cameras and other equipment. Tens of millions of neighborhood monitors and Communist Party cadres provide assistance.

The Party, through its cells, controls every business of any consequence. Moreover, fentanyl cannot leave China undetected as virtually all shipped items are examined before departing the country.

“You got to understand that none of this could work without the Chinese government’s involvement,” said former State Department official David Asher to NewsNation’s Leland Vittert. “We’re dealing with the Chinese Ministry of State Security, the United Front part of the Communist Party. They are organizing both the fentanyl shipments to Mexico. At some level they are involved in manufacturing, and doing it with the goal of killing American kids.”

Whether the cartels or the Chinese add in the colorful dye, the Communist Party continues to back the fentanyl gangs knowing the drug is marketed to children. There is one inescapable conclusion: China’s ruling organization wants American children to die of drug overdoses.

First, the U.S. Treasury Department can designate Chinese banks laundering fentanyl proceeds to be of “primary money laundering concern” pursuant to Section 311 of the USA Patriot Act. Treasury can then prohibit American banks from dealing with the designated entities. Because every dollar transaction, other than transactions in physical bills, clears through a New York bank, designated institutions would effectively be forced to cease international business.

There is also an argument that the Chinese central government and Communist Party themselves could be so designated because they knowingly participate in the laundering of fentanyl proceeds through the state banks.

Second, as Rep. Scott Perry (R-Pa.) has proposed, the Communist Party should be added to the “Top International Criminal Organizations Target List,” an act that would essentially direct federal prosecutors to pursue the Chinese political organization. “This critical labeling,” he writes, “is an intragovernmental effort to identify and eliminate the international criminal organizations that pose the gravest threat to U.S. national interests.”

Are these measures extreme? Perhaps, but close to 100,000 Americans each year overdose on fentanyl and related opioids, and soon many more of them will be children.

Gordon G. Chang is the author of The Coming Collapse of China. Follow him on Twitter @GordonGChang.

Texas family discovers abandoned baby in backyard shed after man steals neighbor’s vehicle
California to Ban Natural Gas-Powered Home Appliances
Inside the Aggressive Government Push to ‘Nudge’ You to Behave Correctly
Florida Man Friday: That Is a Ring Doorbell AND He’s Happy to See You
Who Gets Hurt From High Gas and Diesel Prices? There’s More Harm Than You Think.