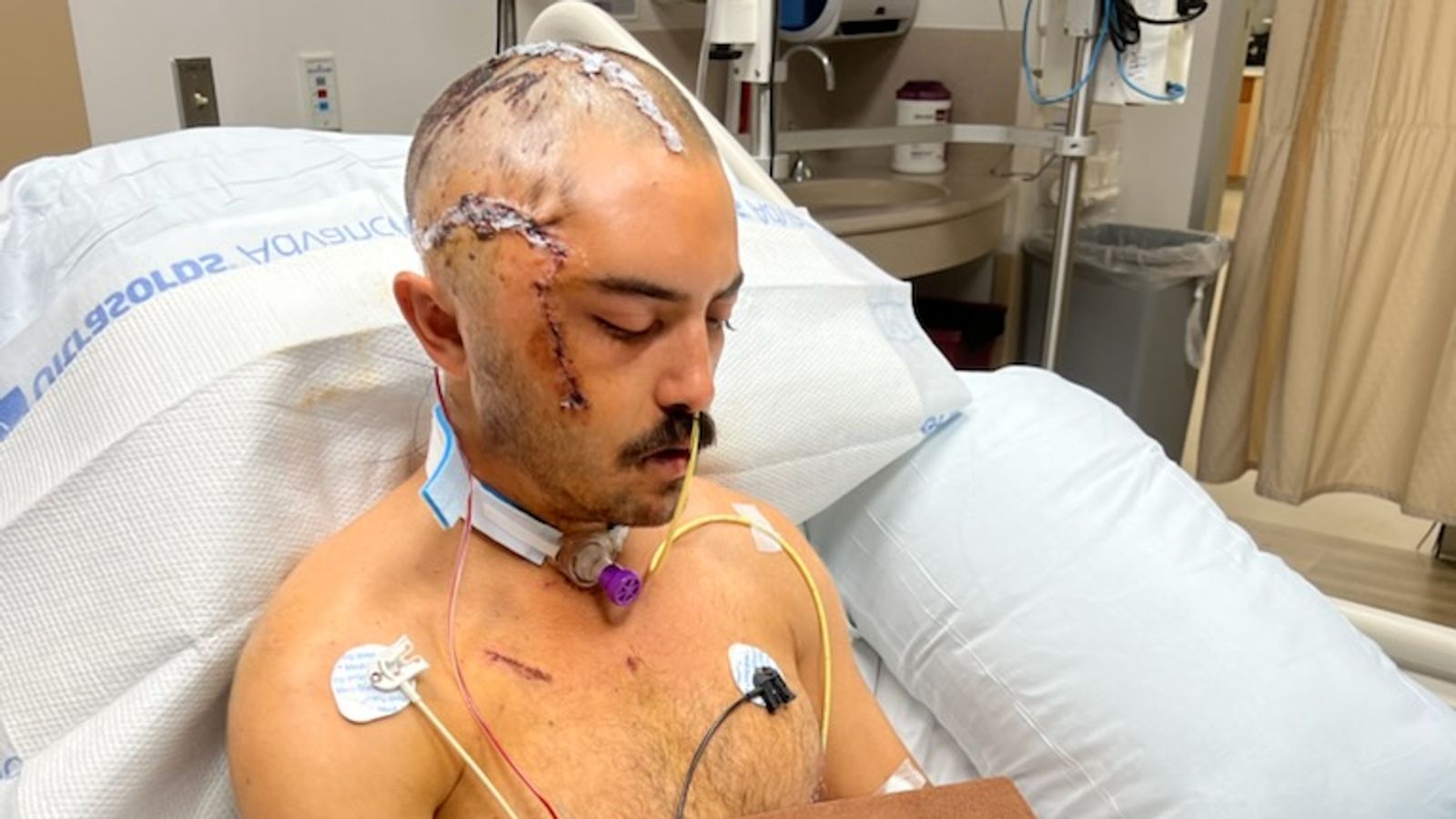 A man badly injured in an attack by a 12ft-long alligator in an incident caught by a drone has told Sky News how he grabbed the creature’s teeth, tongue and snout and was “miraculously” able to roll the animal.

JC La Verde, 34, said his head and torso ended up in the reptile’s mouth as it bit down on him before he was able to fend it off and get away.

Footage showed him unknowingly swimming towards the alligator which was coming in the other direction in Lake Thonotosassa, near Tampa, Florida.

His work colleague was filming him at the time over the lake for a promotional video for an adventure race and caught the terrifying attack on camera.

Mr La Verde, a firefighter, said: “I was unable to see it (the alligator). I hit it directly with my head. It chopped me on my head, my scapula (shoulder blade), and my upper torso.”

He said the impact felt like “hitting a brick wall”.

He said: “I felt the scales, I felt the teeth. I knew immediately what I was in. There was no doubt where I was.”

Mr La Verde, who is an “above-average” swimmer, said: “It crunched down, puncturing my skull, and destroying my jaw, dislocating it on two sides, and in the middle it broke it in two.”

It is “overwhelming that I survived this thing” as “it tried to kill me”.

“I knew I was going to get out of the situation and I knew I had to act,” he added.

“By doing that I miraculously was able to turn it.”

Mr La Verde said he had since seen the video about 40 times.

He said there were two reasons why it let him go: “I didn’t become submissive, and I grabbed its snout and I was also playing with its inside of its mouth.”

“I was confused – but it was probably even more confused about what was going on, and probably about how quickly I did it.”

“We rolled and then it let go and then I kept swimming”, and he was able to get up on to safe ground at a nearby dock.

He was helped by some Good Samaritans who tended to him before an ambulance arrived and he was taken to hospital.

It is believed the alligator was trying to protect its nest close by when the attack happened on 3 August.

The animal is since believed to have been caught and put down by the owner of a nearby property during “alligator season” which means it was legal.

Mr La Verde spent 10 days in the hospital after having face and jaw reconstruction surgery and a craniotomy, with doctors removing part of his right temporal lobe that had been pierced by a fractured bone from his cracked skull.

His emergency surgery lasted six hours and he will need a couple more surgeries in the future. He now must wear a helmet to protect the right side of his head.

His wife Christine told Sky News that she felt the episode was “terrifying” and she found out what had happened on Facebook.

She said seeing her husband in hospital after suffering the trauma was “very overwhelming” and “shocking”.

She added he was “progressing well”.

Florida Man Friday: That Is a Ring Doorbell AND He’s Happy to See You
Russian NHL Players Banned From Playing In Czech Republic
‘Life-threatening’ storm Ian upgraded to hurricane
25 FBI agents with guns drawn reportedly raid pro-life activist’s home to the horror of his family; he faces 11 years for pushing a man outside an abortion clinic
NASA smashes spacecraft into asteroid seven million miles from Earth in ‘planetary defence’ trial