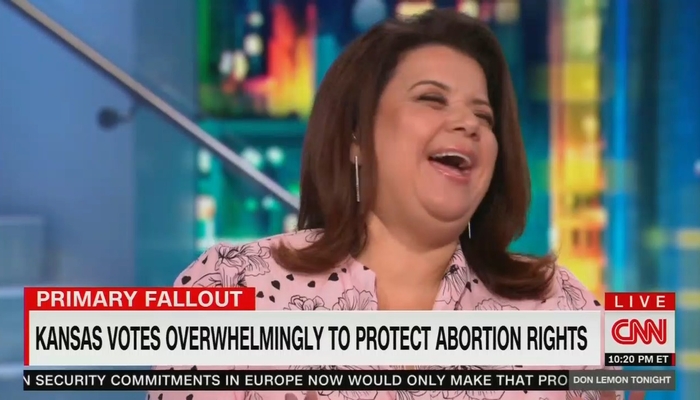 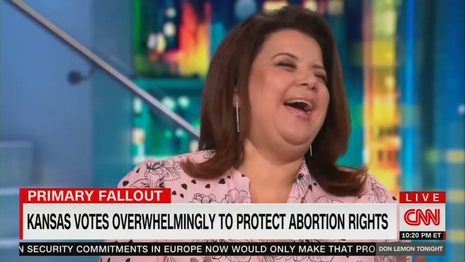 CNN’s Don Lemon Tonight host Don Lemon was clearly happy on Wednesday night, that Kansas voters didn’t approve of an amendment that would allow the state legislature to enact a tougher ban on abortion. In his quest to analyze the shocking election results in Kansas, Lemon brought on vile, so-called “Republican” Ana Navarro to spew her usual bile at Republicans.

“This is a state that Trump carried by 15 points in 2020. Last night, the pro-choice side won 58 percent of the votes. That means a lot of Republicans had to go out and vote for this,” Lemon said with shock. He then paused and asked Navarro “why?”

Of course, Navarro never explained how this amendment would take rights away. Neither did she provide any statistics that prove there are enough voters with “mistresses” to defeat a statewide ballot initiative. Nor did she explain what the two have to do with each other.

Lemon then asked her to explain how Republicans feel about abortion in light of this result since Navarro allegedly knows the Republican Party and was “a Republican strategist.”

Without providing any names or evidence of any kind to back up her wild and irresponsible allegations, Navarro claimed: “there are congresspeople right now, Republican U.S. congresspeople who were pro-anti-abortion who was revealed had sent their girlfriends to have abortions.”

Nobody should be surprised at Navarro’s hateful and fact-free comments. One only has to be reminded that she once proclaimed that children in foster care and her disabled relatives should’ve been aborted. This is the kind of person she is. She’s perfect for CNN & The View.

This unhinged commentary from Navarro was made possible thanks to the endorsements of Discover, Liberty Mutual, and Fidelity. Their information is linked so you can contact them.

DON LEMON: This is a state that Trump carried by 15 points in 2020. Last night, the pro-choice side won 58 percent of the votes. That means a lot of Republicans had to go out and vote for this.

NAVARRO: In all of our lifetime. Alice, you and me were not alive in 1964 when LBJ—-you weren’t alive, right? LBJ got—

LEMON: I was a glimmer. I was almost alive.

NAVARRO: LBJ got elected. And so that’s the shocking part, the numbers and the fact that it’s such a red state.