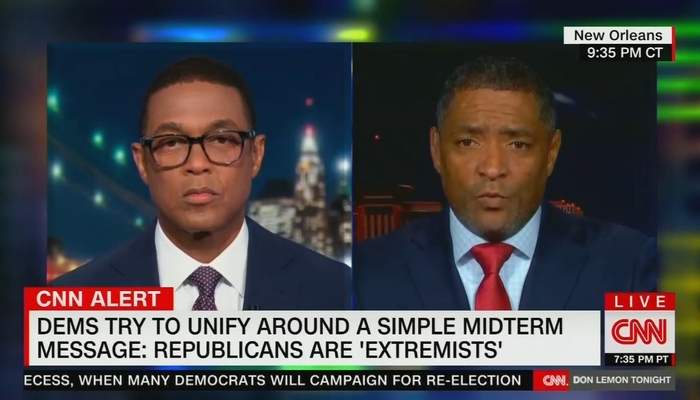 In what amounted to a televised strategy session with Democratic National Committee senior advisor Cedric Richmond Wednesday night, CNN’s Don Lemon promoted the party’s new election strategy of doubling down on the last failed cycle. “[The] idea about calling Republicans extremists, is that the way to go?” the Don Lemon Tonight host wondered.

“Absolutely. Because we have to call it for what it is and they are extreme,” Richmond unashamedly answered.

Both Lemon and Richmond align with the Democratic Party game plan that is quick to claim the current GOP is “not your father’s Republican party.” This stems from Biden’s declaration in late April in which he claimed the party had shifted to a MAGA (Make America Great Again) or even “Ultra-MAGA” stance.

Circling back to the talk on Wednesday night, Richmond stated, “This Republican Party is extreme. And anybody who tells the truth, who calls out the President is abandoned and ostraciz[ed],” referring to the January 6 witnesses and testimonials.

Thus, calling them extremists is the only option. A recent NewsBusters blog Don Lemon asserts that the goal of journalists in this day and age is to hold Republicans accountable. He suggested there was an “intermingling and fusion between extremists and the GOP, and I really see the GOP as an extremist entity now.”

Treating both sides fairly was never an option, a potent holdover from the days Jeff Zucker ran the network.

Whether you can agree or not, the labeling is ridiculous, especially when these ‘journalists’ claim to be speaking the truth. Then again, Lemon claimed in the same blog that if the media is fair to the GOP, then journalists aren’t going to do their jobs.

As Richmond continued with his smears against the GOP, Lemon probed at his passion for the cause, “Cedric, where has this fire been?” Going so far as to say, “you weren’t this fiery when you were working at the White House, it’s good to see you unleashed at least.”

Fueling this fire of disunity and name-calling, Lemon proclaimed, “There needs to be more people with fire like you.”

CNN Politics released a story earlier Wednesday with the headline, “Fearing a wipeout, Democrats try to unify around a simple midterm message: Republicans are extremists.’”

Is this all a ploy to hide from the fear of losing precious power? While Richmond held that this “premature expectation that Republicans can win is just absolutely wrong,” why does he still feel the need for the name-calling?

This segment is sponsored by Starbucks and Southwest. Their contact information is linked.

CEDRIC RICHMOND (DNC senior advisor):  And come November of this year I think that you will see Americans make a choice between one extreme party and another party that’s actually looking to make corporations pay their fair share, reduce the deficit and help families. And that is goal number one. And then for the President’s reelection, he’s not running against the all mighty, he’s running against the alternative.

And if you look at this party, the alternative is extreme and we will have a bunch of things to run on that we have been able to accomplish through executive order when Congress wouldn’t act or through things like the infrastructure bill. Where, by the way, we’re going to remove contaminated water from 10 million homes in this country, 400,000 schools and daycares.

We’re going to bring broadband to rural America and we’re going to invest in community violence intervention like no one has ever done. And with a comprehensive model that empowers people to reach their wildest dreams. I think that’s a record we could run on every day of the week.

LEMON: You sound, I mean, listen, you sound like you’re still working at the White House by the way. I know that you’re at the DNC now. But listen, you mentioned, you said extremes. Right? Some strategists think that Democrats can win over midterm swing voters by calling out Republicans, calling them extremists.

I mean, it sounds similar to what Biden has been doing in recent weeks. Let’s listen, and then we’ll discuss.

LEMON: Idea about calling Republicans extremists, is that the way to go?

RICHMOND: Absolutely. Because we have to call it for what it is and they are extreme. When you start talking about overturning Roe V. Wade, 50 years. And you start attacking women’s reproductive freedom. You start attacking choice. You’re attacking voting rights. You’re doing all of these things that are so contrary.

And by the way, they love to tout that they are Pro-law enforcement and that they love law and order. None of them will call out the President and the lawless acts of January 6th and I was in the capitol. It wasn’t a tourist visit. It was an insurrection. It was a violent insurrection and it was done at the behest of President Trump.

And so, when we talk about this extreme Republican Party led by President, former President Trump, who still doesn’t realize that he lost the election by almost eight million votes. I think that people get it. And I think that people realize what direction they want this country to go in.

LEMON: Listen, listen, I think on — on the — on the main point, I think most people will agree with you. There are a few Republicans. As you know, the Kinzingers and the Cheneys of the party, but there are really few and far between. How do you explain them? Because they’re calling out the President, they’re saying, no, they didn’t, you know, that this was a violent insurrection, and then that shouldn’t happen.

RICHMOND: Well, but they’re also paying a price for it. The Republican Party ostracize them because they are honest —

RICHMOND: — and you see that happening.

And now all of a sudden, he realizes that this isn’t the party of your father’s Republican Party. That’s been happening now for years. Is he all of a sudden, now in step with, and has been out of step for the first, you know, year of his Presidency?

RICHMOND: Absolutely not. And I’ll tell you that even as extreme as the Republican Party is we find ways to work with those people who have the greater good in mind and who will put America first. That’s how we pass the infrastructure bill. That’s how we’re going to replace lead pipes and crumbling bridges, and levies and protect homes. And we’re going to continue to do that where we can with willing partners.

RICHMOND: And I think that the goal of the President of the United States, not just the Democrats, is to make sure that he continues to move the ball forward and work with people who’s willing —

RICHMOND: — to work with him. So, as he — we continue to call people extreme, we’re going to work with the people who are willing to do it.

RICHMOND: No, that, Don, the fire has always been there. But —

LEMON: All right. There needs to be more people with fire like you to —

RICHMOND: What I would just — what I would just close with Don is that at the end of the day, my children, my child will be okay. And for many of us our children would be okay, but there are children out there that we know and will never know that won’t be okay if we don’t get this right. And we owe it to keep our heads down and just do the work.

RICHMOND: And that’s what the President is doing. And I am out of the White House now, and I will have a lot more fire because our goal right now is to win the midterms. You can’t govern if you can’t win. And this premature expectation that Republicans can win is just absolutely wrong.

LEMON: Cedric Richmond, thank you. Please come back. I appreciate your candor. Thanks. We’ll be right back.

4 Takeaways From Senate Panel’s Hearing on Gain-of-Function Research, COVID-19
Bleu: CIA should respond to speculation regarding human trafficking, Jeffrey Epstein
Memories and lives swept away as aftermath of Kentucky floods revealed
Undermining Legacy of Jefferson and Madison in Their Own Homes
Bed Bath & Beyond is discontinuing a private brand as it tries to reverse declining sales