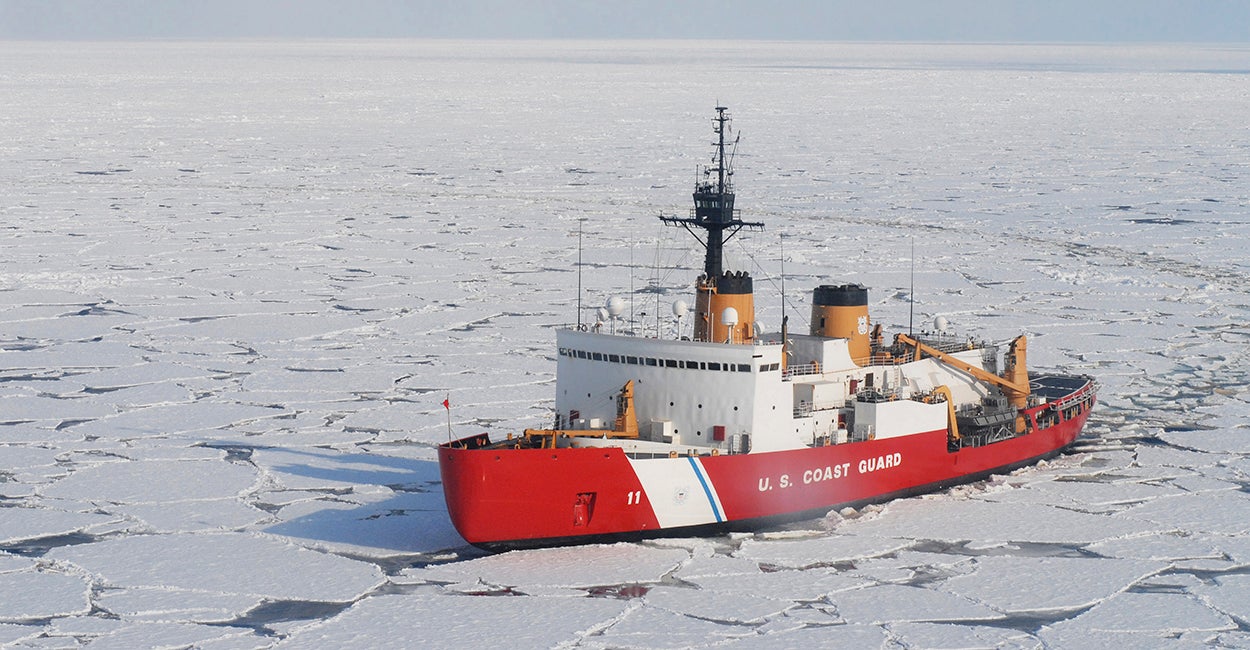 The Arctic is a critically important region to the U.S. because of its trade routes and natural resources, yet America is unable to protect its interests there against increasingly aggressive and better equipped adversaries. If left unopposed, countries like Russia and China will continue to exert their influence in the region and could wrest control of trade through new routes or even exploit resources in U.S. waters.

The Arctic consists of the Arctic Ocean and parts of the United States, Canada, Europe, and Russia. The U.S. has fallen behind in Arctic capabilities, and the best way of fixing that is a new fleet of icebreakers—ships that are essential to operate in the waters of both poles where other ships struggle with the ice.

Icebreakers are specially purposed ships designed to break through ice in harsh environments. They give access to polar regions and perform tasks which normal ships cannot.

Fagan described Arctic conditions as changing and giving way to new navigable routes as Arctic ice melts. One of these routes is the Northern Sea Route, which has become a more viable shipping lane in recent years.

The U.S. hasn’t deployed any new polar icebreakers since 1999, and while our ships increasingly suffer from mechanical failure and overextension, our nation’s adversaries continue to grow their influence in the Arctic.

The Coast Guard plans to acquire three heavy icebreakers and eventually three medium icebreakers over the next 15 years. The first of thesepolar security cutters commenced construction this year, with the ship not expected to be delivered until 2025.

Meanwhile, China has been heavily investing in its Arctic icebreaker fleet for the last two decades and now has its eyes set on becoming an Arctic power.

China considers itself a “near-Arctic state,” despite its closest land connection to the region being over 900 nautical miles away. China has spent considerable resources expanding its influence in the Arctic region by building research installations, trading through Arctic waters, and growing its relationships with Arctic states.

China’s ultimate goal is to pave its “Polar Silk Road,” which will take advantage of the new shipping routes and minerals becoming more available because of ice melts and other changing conditions.

China currently has two polar-capable icebreakers that it uses for its research and supply missions in the Arctic Sea. And China’s icebreaking fleet is getting larger and more modern, with a nuclear-powered icebreaker and arctic supply vessel in development.

China isn’t the only threat to U.S. interests in the Arctic. Russia currently fields the world’s largest icebreaker fleet with over 40 vessels in active service.

And Russia has more icebreakers planned for construction in the next decade, including Project 23550, a polar-capable patrol ship armed with anti-ship weaponry.

Russia is preparing for more Arctic shipping routes becoming viable and maintaining Russian Arctic sovereignty through the threat of military force in those areas.

The situation is far more dire for U.S. icebreakers. The U.S. icebreaking fleet has become inadequate and cannot protect U.S. Arctic waters. Coast Guard icebreakers perform similar missions as other Coast Guard ships, like enforcing U.S. laws, protecting resources, and collecting intelligence, while having the added capacity to work in waters where other ships can’t go.

The Coast Guard currently operates two polar-capable icebreakers: a heavy polar icebreaker, Polar Star, and a medium polar icebreaker, Healy. Both ships are aging rapidly and require extensive maintenance in port after every deployment at sea.

The Polar Star has been in commission for over four decades and has greatly overextended its intended service life. The ship’s limited time at sea is tied up in an annual supply run to McMurdo Station in Antarctica, then it limps back to drydock after each expedition and is repaired enough for next year’s supply trip.

The Healy was commissioned in 1999 and is now showing its wear after over two decades of active service. After an electrical fire during an Arctic mission in 2020 left the ship incapacitated for over a year, the U.S. had no active icebreakers at sea.

The threats are mounting, and U.S. icebreakers are unsuited for year-round Arctic operations. With a growing focus on Arctic natural resources and shipping, the U.S. must act to preserve its interests in the Arctic region.

In order to counter these threats, the Coast Guard must ensure the delivery of the newly designed polar security-class cutters as soon as possible.

The Coast Guard’s fiscal year 2023 $13.8 billion budget request includes purchasing and modifying a commercial icebreaker as a bridging strategy while the new icebreakers are being built.

While band-aid measures like acquiring a commercial icebreaker can help, the U.S. needs to get serious about building new icebreakers: It needs a fleet.

The new ships will ensure the greatly needed full-time presence of U.S. icebreakers in the Arctic Sea.

In the meantime, the Coast Guard must continue maintaining its aging icebreaker fleet.

Supplying the U.S. Coast Guard with a new icebreaker fleet will help us maintain a step ahead of our global competition with China and Russia and ready the U.S. for the future of maritime trade.

These Americans Are Most Likely to Be Audited by IRS Under ‘Inflation Reduction Act’
US climate bill passes final hurdle before Biden signs it into law
The Mar-a-Lago Raid: What Happened and What’s Next
After Garland’s Statement, Does Anyone Else Smell a Cover Up?
Salman Rushdie in surgery after he was stabbed in neck and abdomen, police say