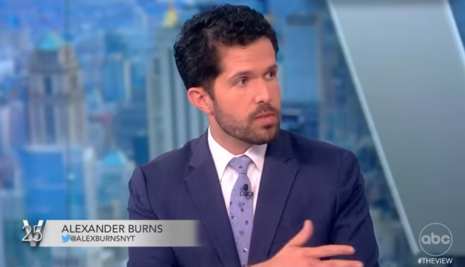 Meanwhile, the paper ignores the population drain from blue states like California, whose overbearing COVID restrictions on the economy have caused people to flee to freer states like Florida.

As a group of conservative states enacted severe abortion restrictions last year, Gov. J.B. Pritzker of Illinois sent letters to a handful of corporate executives with close ties to Texas.

Mr. Pritzker, a Democrat, urged executives to rethink basing their companies in “a state that strips its residents of their dignity.” Most workers, he wrote, did not want to live under a rigid abortion ban.

Oddly, European nations have suffered from such “severe” and “rigid” restrictions for years, without much notice from the Times, or any competition among EU to loosen abortion rules to attract young talent. As usual, liberals don’t see unborn children as deserving of “dignity.”

There was no immediate response to his overture. Companies thriving in Texas’ freewheeling business environment were not about to flee because of legally contested abortion regulations that were not certain to be enforced.

Ten months later, the political and legal landscape is radically different. And a Supreme Court decision that abolished the right to an abortion is now threatening to reshape the lines of economic competition between conservative and liberal states.

It’s far too early to document that “threat,” but Burns was eagerly expecting the worst.

For companies anchored in economically vibrant conservative states like Texas, Tennessee and Georgia, the rollback of women’s rights is no longer a hypothetical scenario but an immediate challenge….

That bargain may have grown more difficult in states that have imposed punitive abortion restrictions, banning the procedure altogether or limiting it nearly to the point of elimination.

Then he brought in Biden’s Secretary of Commerce for reinforcement:

Big companies are fighting a “war for talent,” [Gina] Raimondo said, and particularly for female talent given that women make up a growing majority of new college graduates. A former governor of Rhode Island, Ms. Raimondo predicted that companies would find it difficult to recruit skilled workers in states where women’s rights and medical services were sharply curtailed.

Burns found some unrelated “data” that allegedly backed up that view.

Even Burns admitted the recent culture wars haven’t hurt red state economies. “Yet even amid that drumbeat of controversy, a handful of big, conservative-leaning states like Texas, Florida and Georgia have defied predictions that anti-gay policies or laissez-faire gun laws would deter new investment.”

Why has the FBI raided Trump’s estate – and what are they investigating?
The Biden Administration Brings On the Authoritarianism
Licenses suspended after 31 unrefrigerated, decomposing bodies found at Indiana funeral home
Bumper US jobs report defies surging inflation and recession fears
EXCLUSIVE: Brownstone Institute President RIPS ‘Lazy’ Economists for Defending Biden Admin on Jobs