If there isn’t a surge in homeschooling in Oregon’s Salem Keizer School District, something is very wrong with the water in that part of the world. As reported by Libs of TikTok July 12, a school district committee has voted to keep Gender Queer available for children. It’s an extremely pornographic LGBT book.

The school formed a “special committee to determine if the book should be removed,” per Libs of TikTok. The head of the committee, Suzzane West, has a job description that reads, “Crafting and developing strategies that support the district’s movement to become a more anti-racist and anti-oppressive school system.” In other words, normal parents didn’t stand a chance.

The book contains graphic sexual imagery and nudity, as well as panels about binders for transgender people and sex toys. Also featured is an image of gay sex. I wish I was joking. If you don’t believe me, look for yourself (at your own risk). 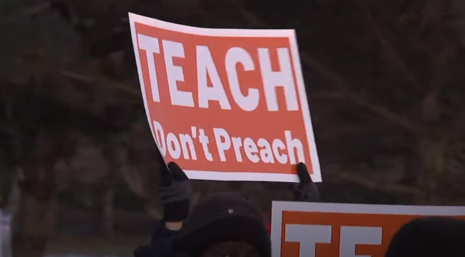 West desperately tried to justify her decision to lots of righteously angry parents in emails sent in reply to complaints. One reads, “The book will be necessary to keep in schools, to help be more inclusive and allow all students from the LGBTQ+ community to have a resource to refer to. In addition, the pages taken out of context do not represent the intention of the book and only served as an illustration to help provide understanding of what the author was trying to portray in their book.”

Yeah, I don’t think context is going to fix the fact there is graphic depictions of gay sex in a book children can read.

Another one says, “This graphic novel is very well done from a literary standpoint. It is an excellent example of a memoir, it includes many visual metaphors, it promotes literacy and accessibility through the graphic format, and it has modern language suitable to our students today.”

The left wants your kids to read about gay sex. It sounds hyperbolic, but it’s laid plainly for everyone to see and be horrified at, ironically even the board itself.

Truly, the apex of liberal literature.