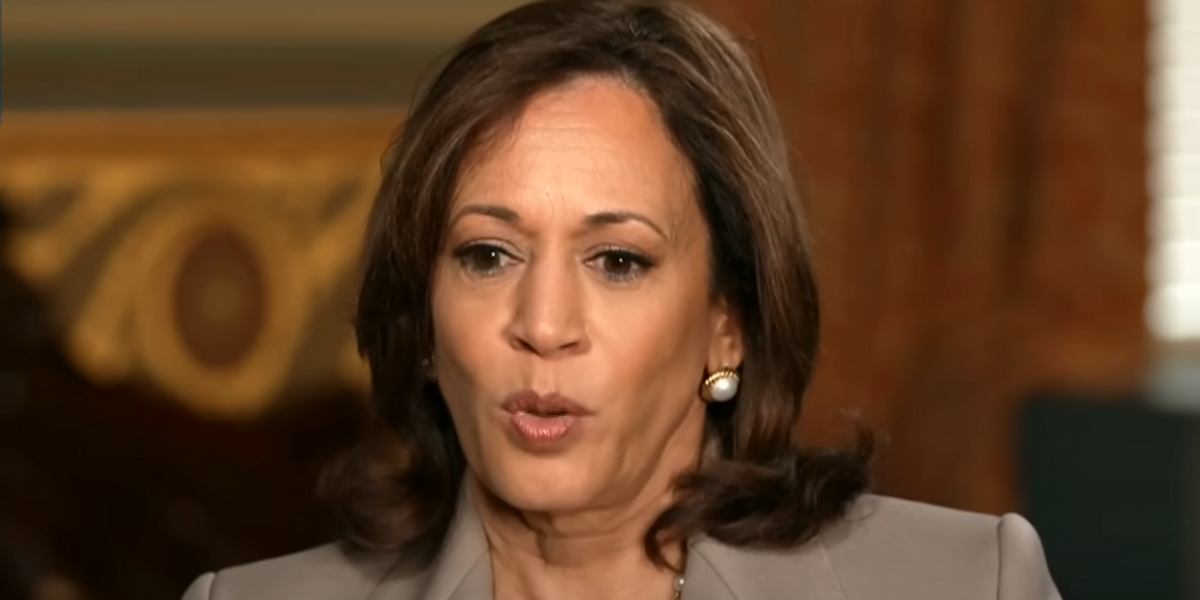 Vice President Kamala Harris was stumped by a question about Roe v. Wade, and proceeded to give a rambling answer.

During a CBS News interview, correspondent Robert Costa asked Harris, “When you look back, did Democrats fail – past Democratic presidents, congressional leaders – to not codify Roe v. Wade over the past five decades?”

Harris immediately ceased having eye contact with Costa, looked away, then gave a meandering response.

Costa quickly rebutted, “Clearly were not.”

Harris replied, “No, that’s right. And that’s why I do believe that we are living, sadly, in real unsettled times.”

u201cEXCLUSIVE: Vice President Harris sits down with CBS News’ @costareports to discuss the Supreme Court ruling of Roe v. Wade, the economy and gun violence ahead of the midterm elections.nnTune in tonight for the full interview on @CBSEveningNews and on Sundayu2019s @FaceTheNation.u201d

Vice President Harris was lampooned for her blathering response in numerous Twitter reactions.

Digital strategist Logan Hall: “Mastered the art of talking while saying nothing.”

Progressive YouTuber Emma Vigeland: “This is incoherent. Is everything ok…?”

Former digital media adviser to Hillary Clinton Peter Daou: “WHAT IS SHE SAYING?”

Radio host Clay Travis: “How is it possible that Kamala Harris is this bad at public speaking?”

Writer Ryan Songalia: “Captions need a bouncing ball to follow along with the words.”

“The Simpsons” writer Broti Gupta: “Kamala Harris talks like she has a translator earpiece on and it has water damage.”

Radio host Erick Erickson: “Holy cow what a bad answer. This is going to cause a Dem revolt. The GOP has been after this for decades. But the Dems thought it settled so did nothing?!”

Editor Curtis Houck: “What is with this administration and an aversion to basic speaking skills and grasp of the English language?”

Kamala was also mocked this week for being “seriously” repetitive while giving a speech at the site of the 4th of July parade shooting in Highland Park, Illinois.

“And — and we’ll deal with what we need to deal with in terms of also, as we move forward, all agreeing that we’ve got to be smarter as a country in terms of who has access to what and, in particular, assault weapons,” Harris told the crowd.

“And we got to take this stuff seriously, as seriously as you are — because you have been forced to have to take it seriously,” Vice President Harris blithered.

u201cVice President Kamala Harris just spoke at the scene of the Highland Park mass shooting. nnu201cWe have to take this stuff seriously, as seriously as you are because you have been forced to take this seriously,u201d she said.u201d

On Friday, Harris met with state legislative leaders from Indiana, Florida, South Dakota, Nebraska, and Montana who are seeking to expand abortion in their states.

Harris was repetitive once again.

The vice president uttered, “Well, this really does highlight, um, the importance of elections and who will be elected in terms of who gets elected.”

u201cKAMALA HARRIS: “Well this really does highlight um the importance of elections and who will be elected in terms of who gets elected”u201d

However, it wasn’t only the vice president who had a difficult time talking this week. President Joe Biden also suffered yet another round of verbal gaffes this week.

While speaking about a new executive order on abortion, Biden read instructions to “repeat the line” out loud from the teleprompter instead of repeating the line.

The president also read the words “end of quote” aloud instead of acknowledging that it was an end of a quote.

‘Abused from the beginning’: Rand Paul calls for repeal of Espionage Act
Target’s earnings take a huge hit as retailer sells off unwanted inventory
S.E. Cupp Shrieks Over GOP Anti-Grooming Laws: They’re Big Government!
TikTok to clamp down on paid political posts by influencers ahead of US midterms
Horowitz: 4.9 million reasons we no longer need a federal government