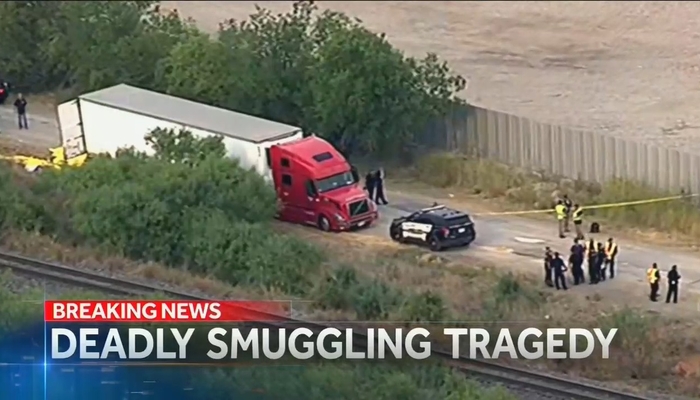 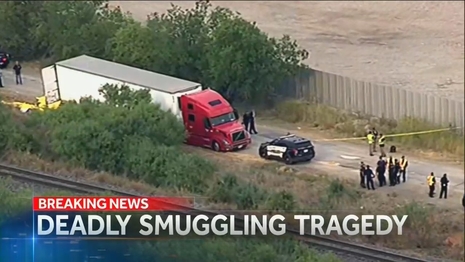 Mark Levin was right. The networks quickly dropped the gruesome deaths of 53 migrants, victims of human trafficking who suffocated in a stifling hot truck at the southern border. Levin predicted last Tuesday that the grisly discovery of the dead and dying in San Antonio, Texas would quickly be buried. And it was.

The radio host led off his Tuesday show with this prediction: “This will come and this will pass. Nobody will be thinking about it or talking about it in three or four days. The border will remain hellish. People will continue to die.”

That’s exactly what happened. The evening newscasts first reported the story on June 28. They proceeded to cover it on ABC’s World News Tonight, the CBS Evening News and the NBC Nightly News through June 30 and then it disappeared. During the scant 13 minutes and 57 seconds devoted to the deadliest human smuggling operation in U.S. history, just 48 seconds hinted at any blame for Joe Biden.

We move onto the other major headlines this Tuesday night, and what authorities now believe is the deadliest human smuggling death in U.S. history. The death toll growing and it is staggering. At least 51 people now dead in San Antonio. Tonight, what we’re learning here about what was discovered inside that truck, a worker making the gruesome discovery. 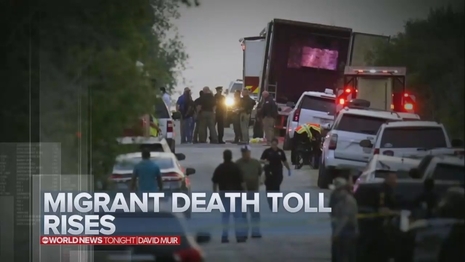 The first night’s coverage amounted to six minutes and 47 seconds. But just 15 seconds of that singled out the current president. After NBC reporter Morgan Chesky described the “horrific human tragedy,” he vaguely mentioned “Washington gridlock over immigration.” It wasn’t until this moment that Biden was mentioned.

Texas Governor Greg Abbott also sounding off, writing “These deaths are on Biden and a result of his deadly open border policies.” In a statement, President Biden said, “Exploiting vulnerable individuals for profits is shameful, as is political grandstanding during tragedy.”

On night two, there was an additional six minutes and 42 seconds. World News Tonight reporter Matt Gutman allowed 33 seconds on Biden, bringing the total to 48 seconds. June 30, night three, only ABC bothered to follow up on this human misery, and that was only for 28 seconds.

“You’re not supposed to open up a truck and see stacks of bodies in there,” said Chief William McManus at a press conference. Fifty one migrants died in the back of a tractor trailer in San Antonio and there were others in there who were suffocating….This is a mass death….Ladies and gentlemen, look, if you don’t have an organized, managed system of immigration, this is what happens. The drug cartels, criminal gangs, mobsters, they’re trafficking people. They are trafficking in people. And people are dying. How many people have died crossing this border since Biden was president?

This will come and this will pass. Nobody will be thinking about it or talking about it in three or four days. The border will remain hellish. People will continue to die. They will continue to transport people to all parts of the country and release them on their own recognizance. As the numbers add up, as the deaths add up. As the increase in crime in various communities adds up. This is what’s going on on the southern border.

After June 30, the evening shows (as well as the morning shows) dropped the deaths of these men and women. The only exception came on the July 3 Sunday chat show Face the Nation. (This was not included in our NewsBusters analysis. We looked at evening newscast coverage.) Host Margaret Brennan briefly mentioned “this horrific trafficking, the worst smuggling tragedy in U.S. history.” She then asked Homeland Security Secretary Alejandro Mayorkas: “How did this smuggler get these people across? Fifty-three people died.”

NewsBusters studies of the crisis at the border have repeatedly found that the network evening newscasts don’t want to cover this story. They abandoned it entirely in November of 2021, January of 2022 and February of 2022. Despite spurts of coverage here and there, one thing is clear: The spiraling situation at the border is a disaster the networks don’t want pinned on Joe Biden. So they simply pretend it isn’t happening.