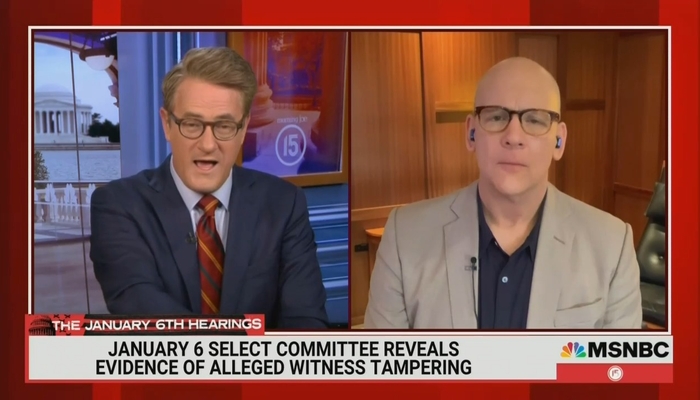 Instead of throwing continued temper tantrums over the overturning of Roe v. Wade and other recent SCOTUS decisions, the crew of Wednesday’s Morning Joe wanted to continue distracting Americans with the political soap opera currently in production by the House January 6 Committee. And how desperate were they? Well, to the point that co-host Joe Scarborough engaged in some religious blasphemy by saying the White House during the Capitol riot reminded him of those who rejected Christ during his crucifixion.

When talking about former chief of staff Mark Meadows, Scarborough preached that he “really played the role of a Pontius Pilate – while American democracy, about to be crucified by this armed mob, he just said, ‘I’m going to wash my hands of it.’”

He then continued his mercy with: “If you lied, if you need, as they say in the business, some time to refresh your recollection and maybe go back and clean up previous testimony, the door’s open,” but warned: “But like Noah’s Ark, that door is going to close soon.” Because everything about January 6 perfectly emulates the Word of God.

Surprisingly, Joe did not dominate the conversations this time. MSNBC national affairs analyst John Heilemann let people know just how much he loves to hear himself talk, boasting that the witnesses’ accounts were “overwhelming,” adding he and Joe were “both so sort of stunned by what we saw.’”

When Scarborough said that the January 6 Committee “played everything right,” and that they were presenting evidence “in a way that the American people follow easily,” Heilemann not only agreed, but also elaborated on that statement for what seemed like forever.

He droned on and on about how “brilliant” the committee has been in keeping Americans interested. “If you can get a reader or a viewer to be asking that question at every interval, “’what happens next? I can’t wait to see what happens next. What’s going to happen next?’” That means they are ‘hooked,’” he concluded.

The bloviating continued when Heilemann said he felt like more people were tuning into the hearings. “People who had no idea they were interested are now riveted. And even people who aren’t watching the hearings are getting a sense of what’s going on in them because so many people are repeating the high points and they’re focusing so intensely on those high points,” he gleefully exclaimed.

If people are as interested as Heilemann claimed, then he must be living in a parallel universe where inflation and soaring as prices are non-existent.

This example of bias and blasphemy was proudly made possible by Trivago and Xfinity.

JOE SCARBOROUGH: John Heilemann, they told the Chief of Staff of the President of the United States that there were people with AR-15s, with weapons, marching toward the Capitol. Meadows kept looking at his phone, could not care less. It – it was an extraordinary moment.

He — he — he really played the role of a Pontius Pilate –

SCARBOROUGH: — while American democracy, about to be crucified by this armed mob, he just said, “I’m going to wash my hands of it.” More dangerous in that moment than Erlichman or Halderman or Joe McCarthy, because American democracy was actually on the line. And he refused to do anything about it, because it might damage his standing with a failed President.

JOHN HEILEMANN:  I mean, Joe, I don’t even know where to begin. You know, we talked yesterday in real time about this because we were both so sort of stunned by what we saw. And I definitely will say that Mark Meadows, who was already at the very center of this investigation before yesterday, is now — yeah, I don’t know if he could be more at the center of it.

But the committee obviously has its eyes on him and the pressure is going to mount on him. In terms of his potential criminal culpability, certainly his moral and political culpability. But I don’t want to obscure— I don’t even want that to obscure the larger picture which is what you guys were talking about before, you know, the most extraordinary or certainly in the running for the most extraordinary congressional testimony in the history of the country, potentially, the most consequential, for the reasons you and Willie and Mika were talking about before. You know, what we now know about Trump’s intent, what he knew, what he did, what he thought, and as the committee is not done yet building that case makes it almost impossible, I would think, to not – I mean the basis for criminal charges is now so abundantly clear. And the pressure on the Justice Department rightly so to bring those charges given what we’ve now learned about Donald Trump’s mindset, what he was willing to do, the things he said, the things he thought, the things he was willing to let go, is just kind of overwhelming.

And then the last thing I will say, it may not be the most extraordinary congressional testimony ever, you might want to put John Dean in that category in terms of political consequence. But the scene that we heard and recounted yesterday about Donald Trump’s behavior in the presidential limousine, I would say is maybe literally the craziest thing ever described by a President of the United States ever.

I mean, yeah, we can talk about it all day long, but the notion of the President of the United States trying to grab the wheel of the limousine and getting into a physical altercation with his protective detail, and lunging apparently for the throat of one of them is so off-the-charts bonkers that I still am having a hard time processing it now, whatever, 18 hours later.

I mean, it truly speaks to a degree of madness and unhingedness at least on that day, that even the sternest critics of Donald Trump have not yet previously not been willing to contemplate. It’s really something.

JOE SCARBOROUGH: And John Heilemann, it’s like we’re getting a tease, obviously, of things to come. And – and — and by the way, the one thing I remember yesterday morning when I was talking about this hearing, I said you know, the January 6 Committee, they played everything right. They’ve done an exceptionally good job of rolling out all of this evidence presenting it in a way that the American people follow easily.

But I think they’re overplaying their hand here. An emergency – an emergency witness, an emergency hearing. They – of course, they didn’t overplay their hand at all. And then at the end, we find out about this witness tampering, and there’s that statement from Chairman Bennie Thompson saying, “you still have time.”

MIKA BRZEZINSKI: Got a chance.

SCARBOROUGH: You still have—

HEILEMANN: Yeah, and, Joe, I think the point that you’re making is so important. We — when these hearings started, a lot of us talked about the challenge that they faced, the committee members, to break through in this polarized political environment, this fragmented media environment. You know, the two impeachments of Donald Trump did not break through to the American people and so, the question was, did they learn the lessons of those two impeachments?

As a matter of political communication and persuasion and bringing — and telling stories, right? And I think that they’ve not only met that challenge, but they put on a master class here, I mean in every respect –

HEILEMANN: – not — I mean the choice to turn this into, not just get to rid of normal congressional theatrics, to get rid of opening statements, to get rid of preening camera-hogging Congresspeople, and focus every session like a laser beam in a prosecutorial fashion, has been brilliant but I’ll say the thing that you just said is the most important thing, which is what they have done is something I’ve never seen a congressional committee do before, which is to grasp the most important element of story-telling narrative which is to keep people interested, you have to keep them asking the question: “what happens next?”

If you can get a reader or a viewer to be asking that question at every interval, “what happens next? I can’t wait to see what happens next. What’s going to happen next?” They are hooked and I think this is a huge challenge for this committee. Again, I’ve never seen it before. But the thing they’ve done has been masterful in terms of isolating on specific stories, specific elements of the larger story they’re trying to tell. And bringing people along, beat by beat, to the point where people who had no idea they were interested are now riveted.

And even people who aren’t watching the hearings are getting a sense of what’s going on in them because so many people are repeating the high points and they’re focusing so intensely on those high points it’s been quite stunning how much that it exceeded the expectations that anybody had for them.