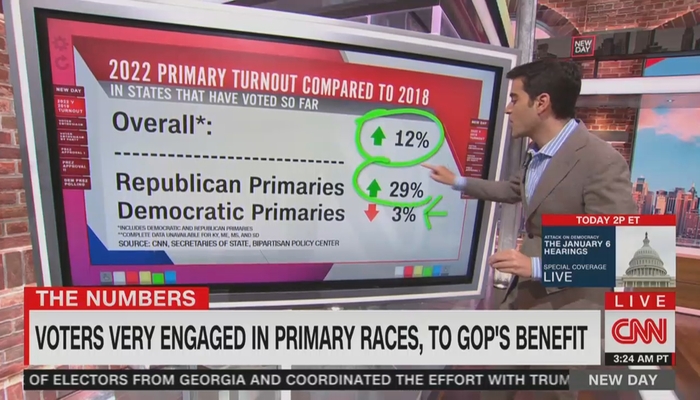 Harry Enten has turned into something of a folk hero among Republicans. He is that rare commodity among members of the liberal media who is willing to break the bad news to Democrats. Here and here are a couple of recent examples of Enten telling it like it is.

The CNN polling maven was back on New Day this morning. He had plenty of bad news for Dems. And even what some Dems might see as good news . . . could very well turn out to be bad news!

The good news for Republicans came on two metrics.

First, in the 2022 primaries, turnout is way up among Republicans—and down among Democrats. Enten said “Look at this number, up 29%! Whenever you see a rise like that you know something’s cooking, and here is what is cooking is Republicans are really engaged.”

Second, Republican enthusiasm is way up from the last midterms in 2018, whereas Dem enthusiasm is down.  In 2018 Dems had a six-point enthusiasm advantage. This time, Republicans have flipped the script, enjoying a 10% advantage. “So look at 2022, extremely enthusiastic to vote in the midterms, right now 30% of Republicans versus just 20% of Democrats.”

As for that good news for Dems that could actually be bad news: Enten displayed data indicating that Biden is well-positioned to cruise to the Dem nomination in 2024, given his still-high approval rating among Dems. Some Dems might rejoice at that news. But do the donks really want to go to the polls in two years with such an enfeebled candidate sporting such a terrible track record?

Then again, who do the Dems have to replace Biden at the top of the ticket? Bernie Sanders is tan, rested, and ready. AOC is old enough to run this time around. And there’s always Kamala. Go for it!

Harry, you know, 2018, in terms of midterm turnout and enthusiasm: very high, like 100-year high. How do things look right now?

HARRY ENTEN: Yeah, so we can look at the primary to give you an idea. And, you know, there’s all this talk, oh, once Trump leaves the White House, voters will be less engaged. Well actually, they’re more engaged so far in the primaries.

So, this is 2022 primary turnout compared to 2018. Overall, look at this! We’re up 12%. We’re up 12%. Among Democrats, I will point out that we’re down, but just 3%. But this is primarily being driven by Republican primary turnout. Look at this number, up 29%! Whenever you see a rise like that you know something’s cooking, and here is what is cooking is Republicans are really engaged, and overall that has made the electorate also more engaged.

BERMAN: who is more engaged?

ENTEN: You know, this goes back to what we saw in slide number one, which is, although turnout may be up from 2018, what is going on, it’s Republicans who are driving this enthusiasm.

BERMAN: And they’re also often also about a president’s approval rating, and President Biden’s approval rating is not high, which has led to some rumblings and whispers, oh, he shouldn’t run again, oh, someone should challenge him in a primary. The numbers tell an interesting story here, though, Harry.

Look where Biden’s approval rating is right now among Democrats. It’s currently at 82%. That looks a lot like the other presidents who cruised to renomination. Now, obviously that can change, we’ve still got a while to go until the primaries. But at this particular point, Biden’s approval rating is where it needs to be among Democrats to not face a primary challenge.

And here’s the fun thing: look at the presidents who did in fact face a competitive primary. Look at where their approval ratings were in, among their own party. It was either in the 70s in the case of George H.W. Bush—who still won every single primary, right? Pat Buchanan, though, gave him a scare in New Hampshire.

But the presidents who either lost the primary, or in fact dropped out, look at their approval ratings in their own party. All, either at 44% for Truman in ’52, or in the 60s for Ford and Carter, who faced really tough nomination fights. Right now with Joe Biden at 82% among Democrats, that is not anywhere near the level that historically we have seen.

Four critically injured after lightning strike outside White House
Boeing Dreamliner deliveries to resume in the ‘coming days,’ FAA says
Plant-Based ‘Burgers’ Were Doomed to Fail
Why has the FBI raided Trump’s estate – and what are they investigating?
Does the FBI Raid Mean Trump Can’t Run for Office?