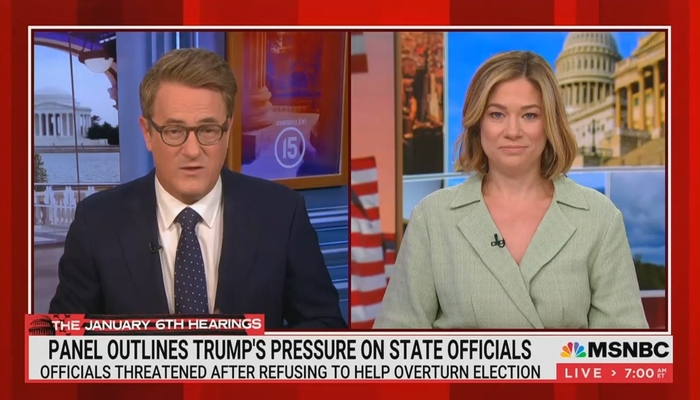 If Americans had a nickel for every time the liberal media unnecessarily focused on the January 6 hearings, they’d have enough money to fill their gas tanks in this economy. But on the Wednesday edition of Morning Joe, Joe Scarborough and MSNBC political analyst Elise Jordan wanted those nickels for the collection plate as they opined about taking people to their heretical church and converting them to worship the House January 6 Committee.

Joe was not just referring to himself and Jordan, but also to others who “who give a damn about this country or give a damn about the Constitution.” He further continued saying “we know the truth. The truth can set us free. We know now what happened on January 6.”

Scarborough really seems to take great pride in knowing about what is happening in this political theater. But to take it up a notch, it almost sounds like he’s comparing this “January 6 truth” to a form of religious practice; especially he talks about stitching together “a working majority that still believes in the Constitution of the United States.”

Jordan added more fuel to this faithful “word on fire” by saying to Scarborough that the “Baptist” in her thinks this “conversation parallel is spot-on,” talking about her experiences in church growing up by saying that no matter how much you sinned, as long as “you took Christ in your heart, then all was forgiven and you were part of the gang.” 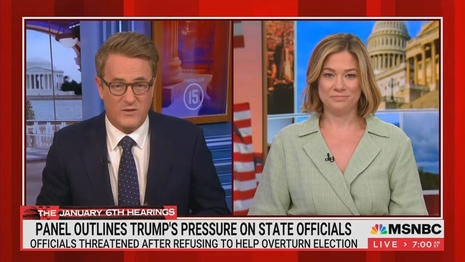 She then went on to say that she thought the testimony of Arizona’s House Speaker Rusty Bowers was inspirational “not just in a political sense, but in a Christian sense.” She even called it a “textbook conversion coming to Jesus moment.”

Now, believers of Christianity all agree that God is good. However, they might be asking themselves what the hearings have to do with religion.

And, of course, Scarborough found a way to tie in his time in Congress into the conversation. He went on to talk about Steven Larson, who was a “human highlight reel” all because he called Joe “a human mission field.” Pastor Joe then ended the conversation saying Larson “always had grace! We’re all in need of grace.”

Did Scarborough and Jordan get ordained on the internet and become born-again Christian all of a sudden? Because all sane-minded people who practice religion can agree that these hearings have nothing to do with being saved.

If anything, these “preachers” are just further confirming how self-righteous leftists can be and how high on their horses they truly are.

There’s definitely something in the water and it has a high proof content.

This example of media bias was proudly supported by Dove and Xfinity.

We have to be — got to win elections. But we’re going to win elections by moving people back to the same rational pro-Constitution I would say, small “C” conservative side of the street.

So, again, I’m just grateful we’re having these hearings. I’m grateful I can pick up the phone and call my friends who have been all-in on the conspiracy theories, and I can talk to my family members who are all in on the conspiracy theories, and I can say, “Hey, listen, I know you were talking to me about the box that those women supposedly pulled out and said they were ballots. You need to see the testimony. Go on Google, check it out. And see what that lie has done to their lives. I know you’re all-in on another—”

You know, the fact is, the country we’re living in today is actually a different country today than it was before these January 6 hearings began. Because we know the truth. The truth can set us free. We know now what happened on January 6. And leading up to January 6. And it just may give us a chance to stitch together a working majority that still believes in the Constitution of the United States.

ELISE JORDAN: Well Joe, the Baptist in me thinks that the conversion parallel is spot-on. Because, you know, in the church I grew up in, you could behave pretty badly. But if you walked down that aisle and you took Christ in your heart, then all was forgiven and you were part of the gang. And you could, you know, join the House of the Lord then.

And so, I thought the Arizona Secretary of State — or the Arizona House Speaker Bowers, that his testimony was so moving. Not just in a political sense, but in a Christian sense. And it was just a very textbook conversion coming to Jesus moment of when he said there was a line he couldn’t cross. And he went back to his faith. And he waited. And that was the moment where he broke. And he couldn’t stand with Donald Trump and his, you know, trying to get him to forsake the American Constitution. And–

JORDAN:  And I do — I think we need to welcome people.

JORDAN: We have to welcome people who want to stand for democracy and for free and fair elections.

You know, Mika, when I served in Congress, Steven Larson was a friend of mine. Steven was called a human highlight reel. When people asked why he was a friend of mine, he said because Joe’s a human mission field. Every day, I’m doing mission work trying to save this guy.