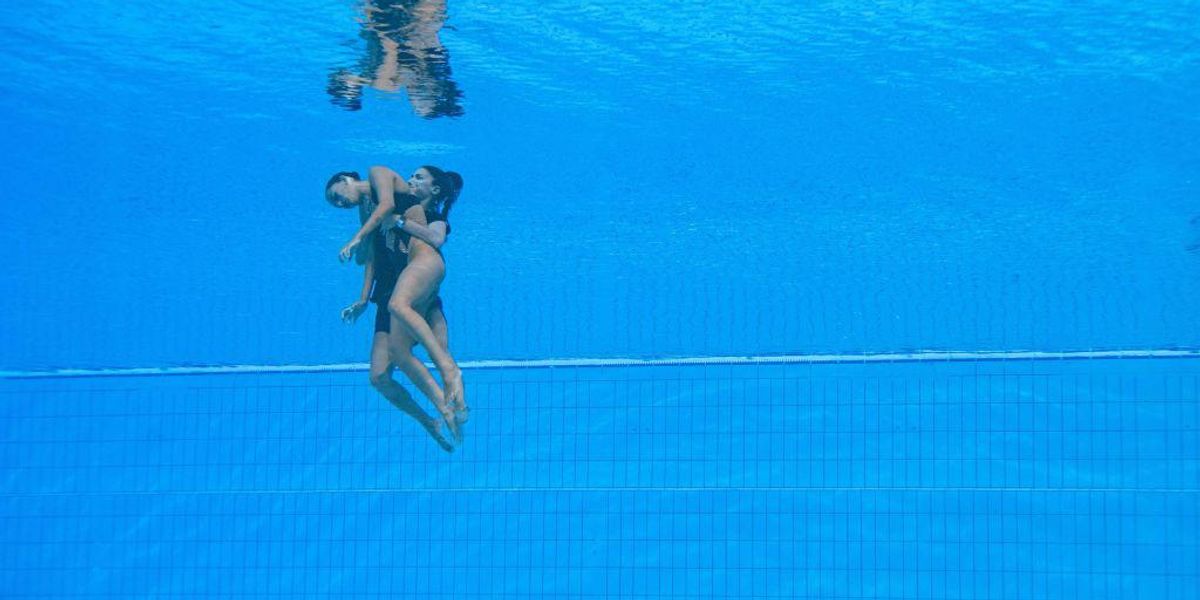 Harrowing photos capture the moment a Team USA swimming coach rescued an artistic swimmer who fainted in the water during the FINA World Aquatic Championships in Budapest, Hungary.

U.S. swimmer Anita Alvarez, 25, sank to the bottom of the pool after completing her solo free routine on Wednesday.

U.S. swimming coach Andrea Fuentes said the lifeguards didn’t react fast enough to save the unconscious swimmer, so she took matters into her own hands.

“I have seen that instead of going up she has gone down and I thought, ‘Something strange is happening here,’ Anita was not breathing and she has not breathed for two minutes,” Fuentes told Spanish broadcaster Cadena COPE in a radio interview. “When a swimmer finishes their routine, the first thing they want to do is breathe.”

Fuentes explained, “I called for the lifeguards, like, ‘Go into the pool, can’t you see she’s going down in the water?'”

She said the lifeguards “weren’t reacting,” adding, “So after a couple of seconds, I went in as fast as I could.”

Fuentes told the BBC that she went into “problem-solving mode.”

The coach – who was still fully clothed in a T-shirt and shorts – heroically raced to the water and swam to the bottom of the pool to rescue the lifeless Alvarez.

u201cAn American synchronized swimmer was rescued by her coach after losing consciousness during a competition. @tjholmes reports. https://t.co/kWY5S6eOU4u201d

“I don’t think I’ve swum as fast ever before, even when I got Olympic medals, and well, in the end, I was able to get her up and she wasn’t breathing,” Fuentes continued.

Dramatic photos show Fuentes pulling Alvarez – a two-time Olympian – to the surface with the assistance of another swimmer.

u201cCoach Andrea Fuentes leapt in to rescue Team USA’s Anita Alvarez, who had sunk to the bottom of the pool and was not breathing at the World Aquatics Championships.nn”It was a big scare. I had to jump in because the lifeguards weren’t doing it” nnhttps://t.co/QzBH5TRcvDu201d

“In the end, everything came out OK,” the hero coach remarked.

Once out of the pool, Alvarez was given medical treatment before being taken away on a stretcher.

In a statement on the USA Artistic Swimming Instagram page, Fuentes gave an update on the condition of Alvarez.

“Anita is okay – the doctors checked all vitals and everything is normal: heart rate, oxygen, sugar levels, blood pressure, etc… all is okay,” she said.

“Anita feels good now and the doctors also say she is okay,” the U.S. swimming coach noted. “Tomorrow she will rest all day and will decide with the doctor if she can swim free team finals or not.”

Fuentes explained how swimming is different from other high-endurance sports.

“Marathon, cycling, cross country … we all have seen images where some athletes don’t make it to the finish line and others help them to get there,” she said. “Our sport is no different than others, just in a pool, we push through limits and sometimes we find them.”

Alvarez – USA’s 2021 Artistic Swimming Athlete of the Year – finished seventh in the final.

Last year, Alvarez fainted following a routine during an Olympic qualifier in Barcelona. In that instance, Fuentes also rescued her in the water.